Who Denies the NKVD’s Involvement in the Katyn Massacre? 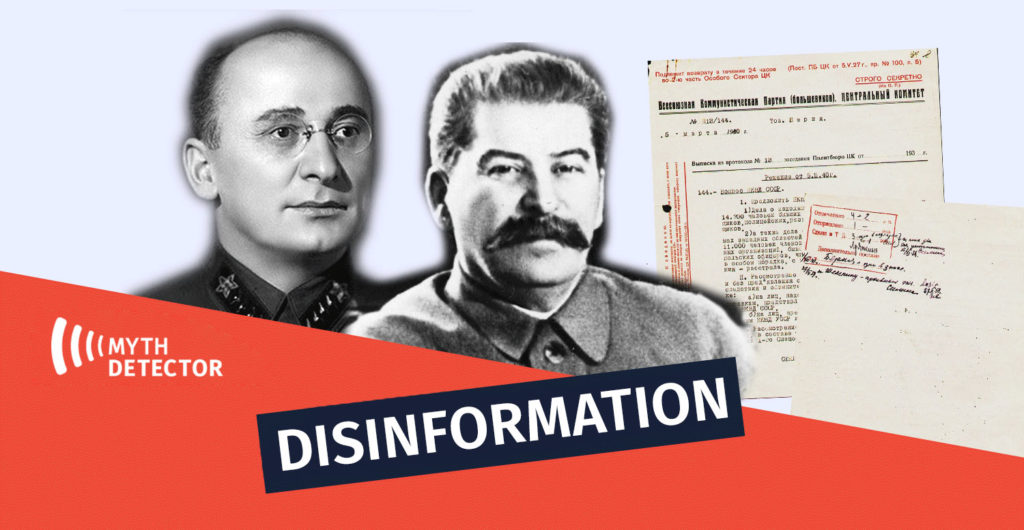 On January 21st, the online outlet “Georgia and World” published an article by Grigol Oniani, the head of the “Stalinian” Society, entitled “Stalin in World War II“. The article talks about the Polish officers and intelligentsia being shot in 1940 by the People’s Commissariat for Internal Affairs in Katyn Forest, Poland. Oniani claimed that despite the “furious investigation and research”, no one was able to find any evidence that would even indirectly confirm the involvement of the People’s Commissariat for Internal Affairs (NKVD) in the mass shootings of the Katyn tragedy.

Grigol Oniani, Author: “Neither in the previous century nor the XXI century, not a single document was found (despite the furious research), which would even indirectly indicate the involvement of the People’s Commissariat for Internal Affairs in the developments of the Katyn forest; Witnesses and participants of the execution have also not been found.”

The claim that no document exists proving the NKVD’s involvement in the Katyn tragedy is false. In fact, the transcript of the March 5th, 1940 meeting of the Politburo of the Central Committee and the memorandum sent to the Politburo by Lavrentiy Beria confirm that in the spring of 1940, Polish military captives were shot dead by the NKVD by the orders of Soviet authorities.

The Katyn tragedy refers to the mass massacre of Polish prisoners of war by the Soviet Union in April and May of 1940. The name derives from the Katyn Forest located in the Smolensk Oblast. The forest was one of the places where NKVD representatives killed Polish officers. In addition to the Katyn Forest, thousands of Polish prisoners of war were executed in other places, including the Tver and Kharkiv prisons. The first mass grave of those shot was discovered in 1943 in the Katyn Forest. The Soviet Union denied the crime and blamed Nazi Germany for the mass murder of up to 22,000 Poles. 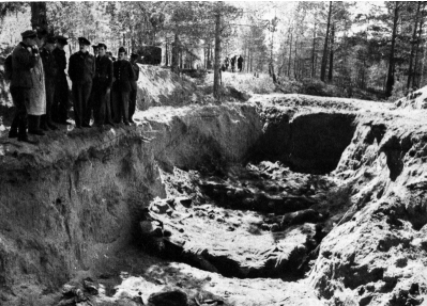 According to Oniani, there is no document confirming the involvement of the Soviet Union in the Katyn tragedy. In fact, in the recordings of the Central Committee Politburo meeting of March 5th, 1940, one reads that the NKVD had decided to execute 14,700 Polish prisoners of war by shooting them to death. The text confirms that these people were: former Polish officers, officials, police officers, intelligence officers, gendarmes, prison guards and more. Each of them was in the camps at the time. 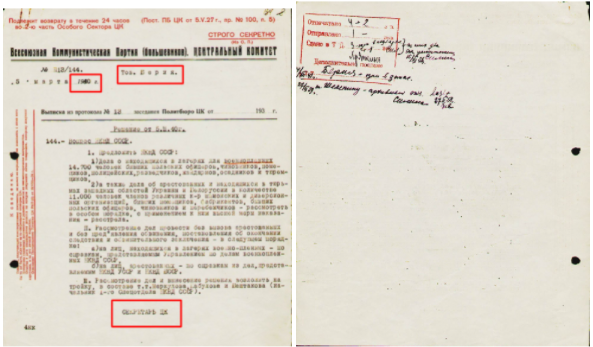 The second part of the same decision states that the 11,000 people arrested in the western regions of Ukraine and Belarus on charges of espionage and sabotage should also be shot. According to the decision, the cases should have been heard without summoning and presenting the detainees. 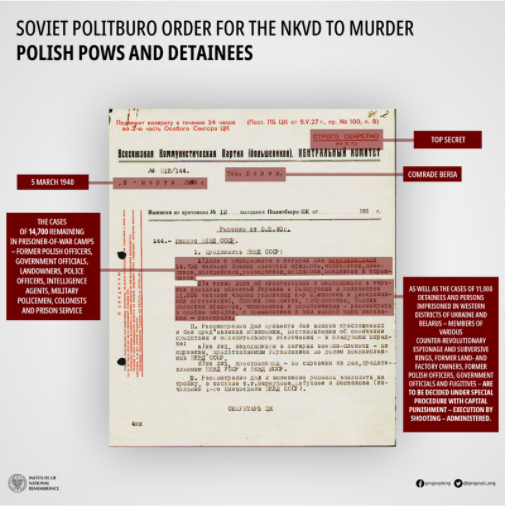 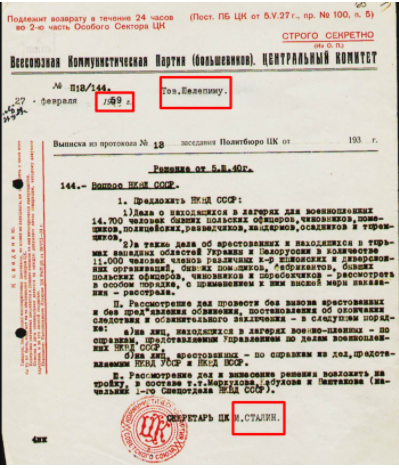 Both copies of one document became available to researchers in 1992 when most of the Soviet documents related to the Katyn tragedy were handed over to the Polish side. The documents were received by the then President of Poland, Lech Wałęsa.

Another document that confirms the mass murder of Poles by the NKVD is the March 1940 memorandum sent to the Politburo of the then head of the NKVD, Lavrentiy Beria. According to Polish historian Andrzej Novák, Beria applied to the Politburo on March 2nd with an offer to kill Polish prisoners of war. On March 5th, 1940, members of the Politburo adopted the memorandum proposed by Beria and signed it. 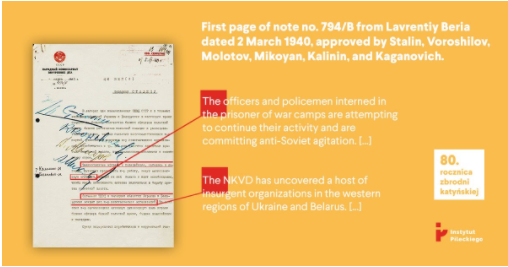 For more false claims regarding the Katyn Tragedy, see the past articles of “Myth Detector:”

According to Grigol Oniani, no witnesses and participants of the Katyn tragedy could be identified. In fact, there are acknowledgements of numerous representatives of the NKVD that confirm the involvement of the Soviet Union in the Katyn tragedy.

According to the 1991 confession of Dmitry Tokarev, the then head of the NKVD Council in Kaliningrad, three NKVD officers from Moscow arrived with him in April 1940, who led the killing of Polish captives. In his confession, Tokarev also spoke about the transportation of prisoners and the number of other details.

Dmitry Tokarev, Retired Major: “For the first time, 300 people were brought from Ostashkov. It turned out to be too much. The night was short, and we had to end at dawn. Then they started to bring 250 people each. Let’s count how many carriages it takes to fill the prisoners to the brim?”

According to Tokarev, inmates of the Ostashkov prison were killed in the soundproof cells of the NKVD prison in Kalinin.

In his confession, Tokarev also admitted that one of the officers from Moscow was Vasily Blokhin. In October 1940, a few months after the Katyn events, Blokhin was awarded an increased monthly salary, along with other NKVD staff, for “efficient performance of special assignments.” 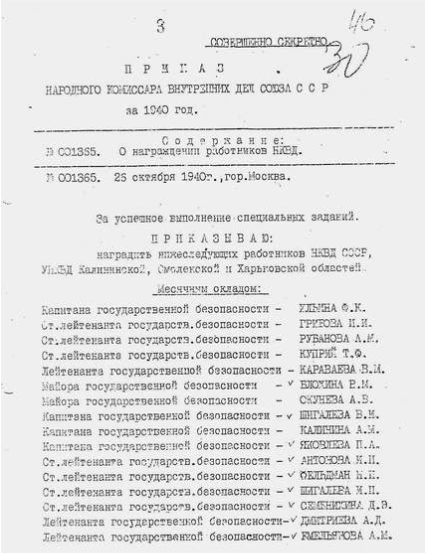 Another witness, Mitrofan Syromiatnikov, worked in the Kharkiv prison in 1940 and admitted that prisoners were being slaughtered in cells. According to Syromiatnikov, the corpses were arranged in three or four rows for burial, and a special substance was poured to accelerate the process of disintegration of the body.

According to a 2010 statement by the Russian Duma, Katyn Massacre was ordered by Joseph Stalin. In 2010, along with Polish Prime Minister Donald Tusk, the then-Russian Prime Minister Putin paid tribute to the memorial to those killed in the Katyn Forest.

Despite the acknowledgement of the role of the Soviet Union in the Katyn Tragedy, two memorials to the victims of Katyn, erected in 1991 at the former NKVD building in the Russian city of Tver in 2020, were disposed of in 2020, 75 years after World War II. 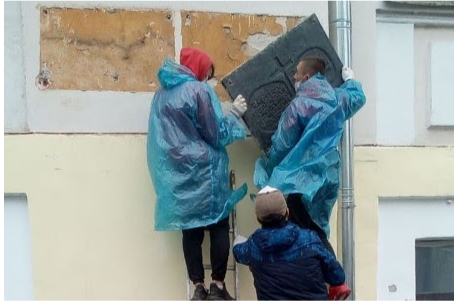 According to the Kharkiv Human Rights Group, the removal of the memorials is an example of attempts by the Russian authorities to rewrite history.