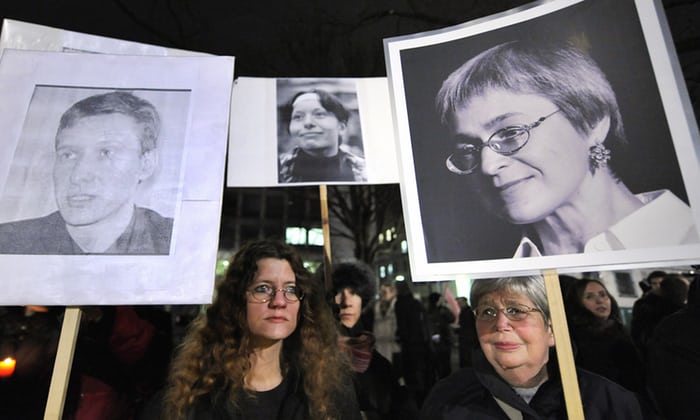 Valeri Kvaratskhelia, host of Obieqtivi TV program Okros Kveta (Golden Ratio) and leader of Neutral Georgia party, said on November 18, 2017 that Russia protects freedom of speech more strongly than the United States. To prove his own words, Kvaratskhelia referred to the remarks made by Russian state TV presenter Dmitry Kiselyov, who also leads the Kremlin-backed broadcaster Russia Today, where he slams the decision made by the U.S. Department of Justice to register RT America in the United States as “a foreign agent,” noting that 19 TV companies are broadcasting in Russia without any obstacles.

Valeri Kvaratskhelia: “Now Russia can punch the United States and American people in the head in connection with freedom of speech, because today Russia protects freedom of speech more strongly. 19 media outlets are operating in Russia without any obstacles. But the United States could not endure what Russia Today was doing there. It was simply talking about what the Americans do not like and it became unacceptable for them.”

The allegations made by the Obieqtivi TV host are absurd, because according to Freedom House’s Freedom of the Press survey, Russia is ranked as “not free,” and according to the Reporters without Borders (RWB) Press Freedom Index, it is ranked 148th among 180 countries. 38 journalists have been murdered in Russia since 1993 for preparing investigative materials on corruption, politics and human rights violations. Almost all leading media outlets in the country are controlled by the persons affiliated with the authorities or the Kremlin.

According to the Committee to Protect Journalists (CPJ), 38 journalists were murdered in Russia in a period between 1993 and 2017. This figure does not involve those journalists, who died during dangerous assignments or crossfire. 33 out of 38 murders remain unsolved and nobody has been held accountable for killing journalists. According to CPJ, the journalists killed in Russia were mainly working on the issues of corruption and politics, while government officials and criminal groups were suspected sources of fire.

According to the Article 4 of the Law of Russian Federation on Mass Information Means, media outlets are required to obey the following rules:

The usage of law in order to regulate the media content has taken place in relation to the TV Dozhd as well, when on July 5, 2016, the “Anti-Maidan” movement addressed the Prosecutor’s Office of Russia with a complaint against the TV channel. As “Anti-Maidan” explained, Dozhd was violating the Federal Law on Extremist Activities by not mentioning “an organization banned in Russia” while referring to the so-called Islamic State in up to 32 materials. On September 6, 2017, a Russian-language edition Sova.news, registered in Georgia, was banned on the territory of Russia based on the decision of the Prosecutor General of Russia. According to the edition, the reason for the block was the article titled “Военный министр ИГ Тархан Батирашвили оставил завещание моджахедам” (Military Minister of the Islamic State, Tarkhan Batirashvili, Left a Will to Mujahedeen).

According to Human Rights Watch’s assessment, the Government of Russia uses the regulations on “extremism” for political purposes. In 2014-2016, 85% of “extremist expression” accusations concerned online expression and the responsibility included both fees and community service, as well as imprisonment. As HRW mentions, in the period between September 2015 and February 2017, the number of imprisonments due to “extremist expression” rose from 54 to 94. For instance, in December 2015, a blogger from Tomsk was sentenced to five years in prison specifically due to “extremism”. He openly criticized Russia’s intervention to Ukraine on Youtube and social media. Next year, another blogger was sentenced to 2.5 years in prison on the “public justification of terrorism” grounds, after he criticized Russia’s military involvement in Syria.

According to Freedom House the legal framework gives the Russian government broad, discretionary powers to regulate media content. This includes the so-called Yarovaya laws which increases prison sentences for promoting terrorism or extremism online.
Freedom House: “The maximum penalty for extremism was increased from four to eight years in prison, and internet users who express approval of terrorism—also a vaguely defined term in Russian laws—will face up to seven years in prison. “

The Russian government uses legislative norms on extremism and mass unrests for regulating social media as well in order to suppress the voices in social networks that are openly critical towards the Kremlin. Radio Liberty reported that on December 13, 2017, Roskomnadzor demanded Twitter, an online news and social networking service, to annul within the next few hours a Twitter account created by Open Russia, an organization founded by Mikhail Khodorkovsky, former owner of Yukos Oil Company; otherwise, Roskomnadzor threatens to block Twitter in Russia.

Roskomnadzor has already included Open Russia into the register of those resources that “call for mass unrests, carry out extremist activities or use information materials of those foreign or international non-governmental organizations, whose activities are deemed undesirable on the territory of Russia.”

According to Freedom House, press freedom has been deteriorating in Russia from year to year. In 2003, Russia moved from “partly free” to “not free” category of countries that was largely determined by closure of private TV channel TVS (ТВС). Since 2003 Russia has been ranked as “not free.”  According to the 2017 World Press Freedom Index, Russia’s score is 83 out of 100, where 100 represents the lowest level of press freedom.

According to Freedom of the Press Survey 2017, the legal framework gives the government broad, discretionary powers to regulate media content. According to the survey, independent media outlets regularly face pressure from the government and such pressure is mainly expressed in aggressive tax inspections and criminal investigations.

The Reporters without Borders (RWB) also points at grave situation in Russia in terms of freedom of expression and speech. Russia’s score in Press Freedom Index is 49.03 and it is ranked 148th  among 180 countries.