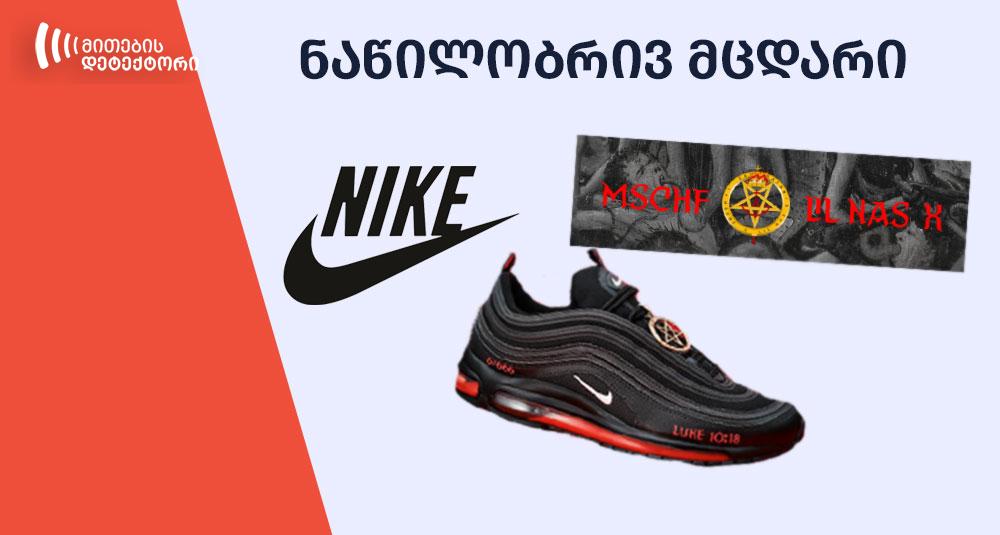 On March 28, 2021, Georgian Facebook user Linda Linda in the Facebook group ანტი-მასონობა. „ანტიქრისტეს“ ახალი მსოფლიო წესრიგი (NWO); ანტი-ეკუმენიზმი (Anti-masonry. ‘Antichrist’s’ New World Order (NWO); Anti-ecumenism) published the post claiming that sports footwear brand “Nike” produced Satan shoes. According to the post, Nike shoes contain human blood and only 666 pairs of shoes will be sold. The post with identical content and additional details was also published by Levan Navi. Levan Navi’s post appears to have several videos depicting the product together with the description of the shoes. 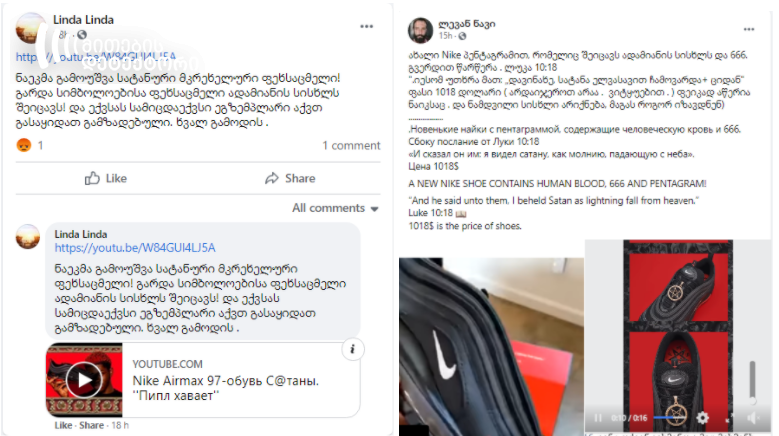 Information about “Satan Shoes” disseminated by the social network users is partially false. Rapper Lil Nas X was the one who created “Satan Shoes” based on one of the Nike Sports Footwear models, however, the well-known brand has officially dissociated itself from the artist’s project and filed a complaint.

“Satan Shoes” is a joint project of American rapper Lil Nas X and American company MSCHF, in the framework of which 666 pairs of shoes with a special design based on Nike Air Max 97s model will be sold from March 29. After Lil Nas X and Nike faced backlash from Twitter users over the “Satan Shoes” announcement, the brand issued an explanation to American media. According to Nike, they do not have relations with the rapper or the company MSCHF. They weren’t involved in the creation of a design or the production of it. As Nike noted, “Satan Shoes” isn’t considered a product made under the brand’s name. On March 29, Nike sued the production team over the trademark infringements. Nike asked the court to order MSCHF to permanently stop producing shoes with the brand’s trademark. According to the lawsuit, unauthorized use of the trademark might cause an erroneous association between MSCHF’ and Nike for users.

“Satan Shoes” is connected to Lil Nas X’s new song released on March 26. The music video portrays banishment from the Garden of Eden. One more detail of “Satan Shoes” that caused particular backlash from social network users was human blood in the shoe sole. As shoe manufacturing company explained to NBC News, blood used in the shoe design was drawn from their team members. It’s worth mentioning that American company MSCHF, known for selling various strange products, created “Jesus Shoes” in 2019 based on Nike Air Max 97s model and decorated it with the silver crucifixion and holy water.