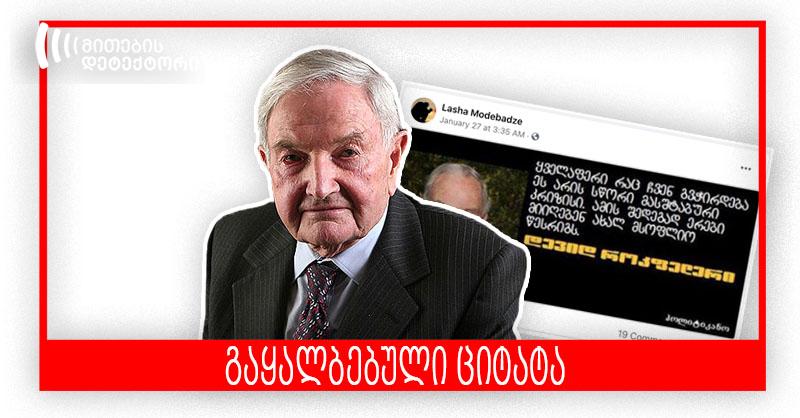 On January 27, Facebook account Lasha Modebadze, presumably a fake profile, published a photo of David Rockefeller together with his words. According to the quote, David Rockefeller stated that “All that we need is a right major crisis and nations will accept the new world order”. Illustration depicting Rockefeller’s words and a photo cites pro-Kremlin digital edition „Politicano” and can be found in the digital edition’s article published on February 4, 2017. 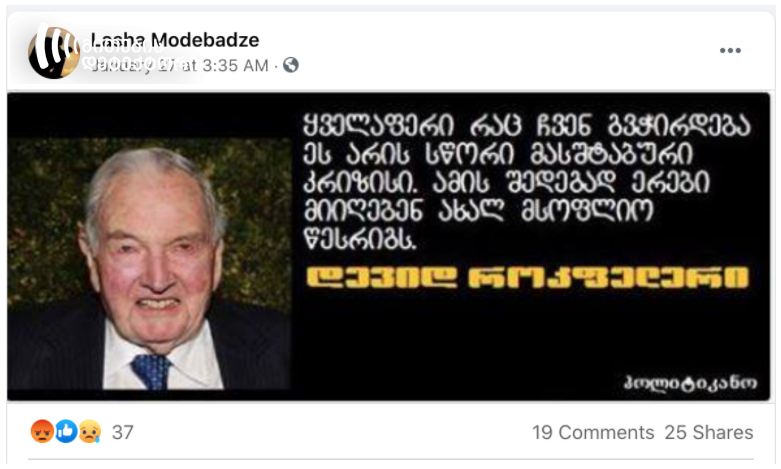 Politicano’s quote shared by Modebadze claiming that David Rockefeller spoke about the necessity of a major crisis to create a new world order is falsified. Misinterpretation of Rockefeller’s quote originates from his speech at the 1994 United Nations Awards Ceremony where Rockefeller spoke about the possibility of creating peaceful and interdependent world order, however, he didn’t’ mention the necessity of the crisis.

Where does Rockefeller’s quote about the new world order originate from?

David Rockefeller’s quote has been disseminated on the internet for more than two decades and is quite popular. Google search engine shows more than 2 million results in English related to this quote. Recent articles link his statement to pandemic ( amarillo.com ). 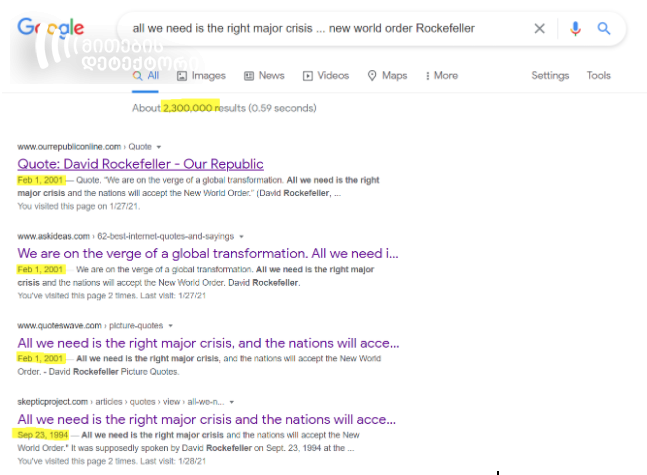 We encounter different versions of this quote, some are longer than the one mentioned above. 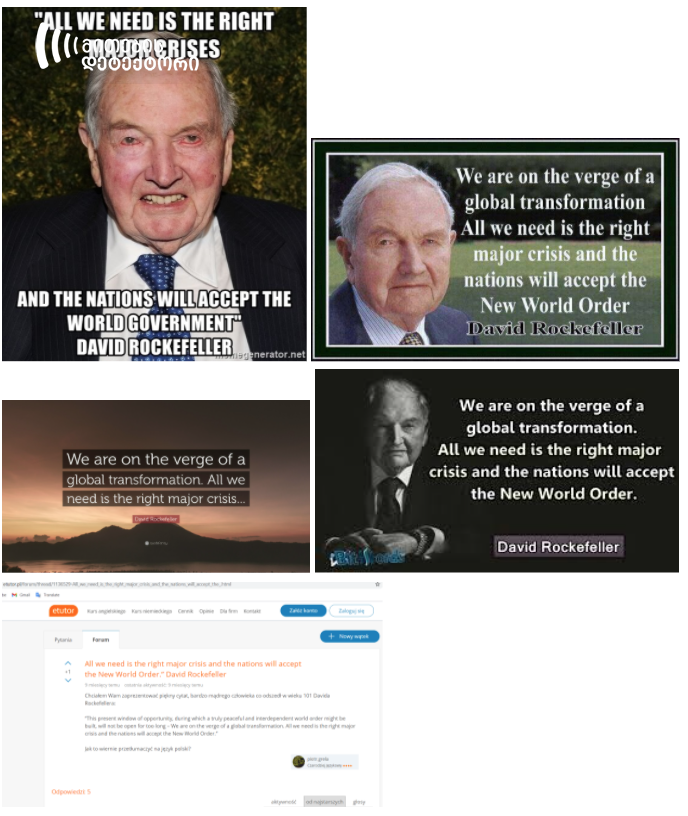 When quoted, the majority does not indicate where and when did Rockefeller speak about the necessity of the crisis and the new world order. However, in some cases, the event indicated is the 1994 Business Council for the U.N and the date – September 23, 1994. 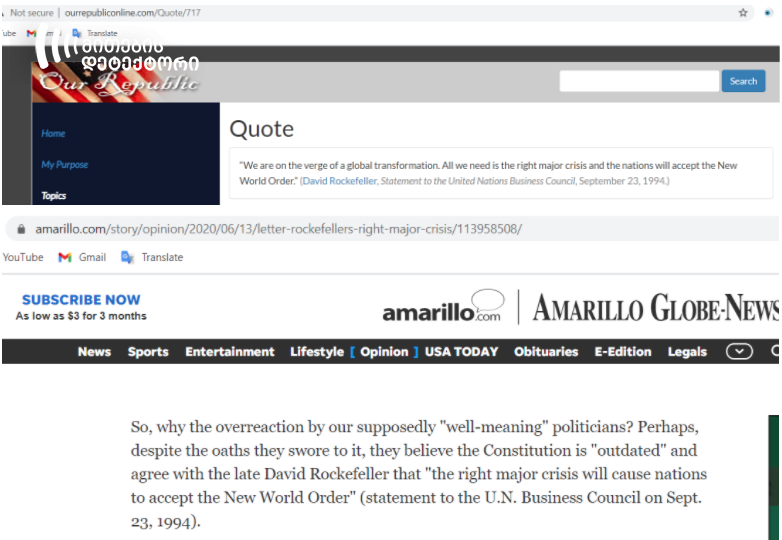 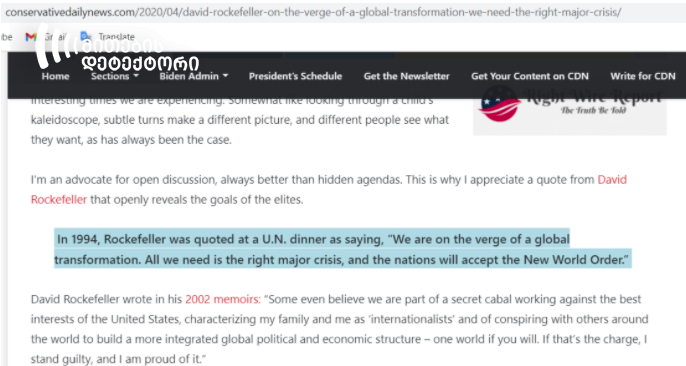 What did David Rockefeller say in 1994?

During the annual UN ambassadors dinner in 1994, Business Council for the U.N awarded David Rockefeller a medal. During the event, Rockefeller delivered a speech and expressed his gratitude. He spoke about global challenges, problems, and the U.S. role in the U.N. In his speech, he put emphasis on the U.S. foreign policies in times of the collapse of the Soviet Union and mentioned that there’s a window of opportunity to build a truly peaceful and interdependent world, however, he explained that this window will not be open for too long and that there are powerful forces that threaten the hopes and efforts. He named ethnic nationalism as such force. 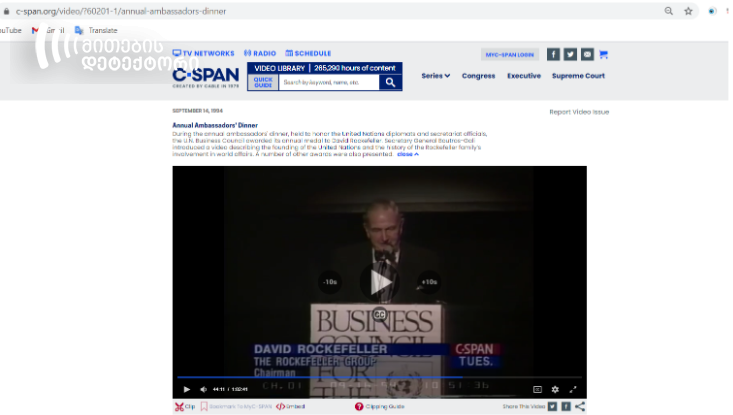 In the footage of David Rockefeller’s speech, accessible on C-Span, there’s no mention of a major crisis for creating the new world order. He views the peaceful interdependent world order as a possibility that presented itself following the collapse of the USSR and could be endangered. Some versions of the quote add fictitious sentences to the one actually voiced by Rockefeller.

Conspiracies about Rockefellers alleging that they are “shadow governance” of the world who control everything and intend to subjugate the population actively circulates in Georgian and Russian media. Rockefeller family, one of the wealthiest in the world, is mostly associated with the oil and real estate business with which, John Rockefeller obtained first billions in the 19th century.

Read more about the conspiracies related to Rockefellers in the article of “Myth Detector”:

Lasha Modebadze, presumably a fake account, was one of the administrators of the Facebook groups კორონა მაფია (Corona Mafia) and “კორონამაფია და საქართველო როგორც საექსპერიმენტო ქვეყანა” (Corona Mafia and Georgia as an Experiment Country). The account was removed from Facebook multiple times but it was recreated. Modebadze shares various, mostly Russian-language, conspiracy theories and disinformation about the coronavirus and Lugar lab on his profile and Facebook groups. Myth Detector has previously written that similar to Kremlin-affiliated Bulgarian journalist Dilyana Gaytandzhieva, Modebadze manipulatively published leaked documents following the cyberattack on Lugar lab.