New Wave of Disinformation Regarding the US Elections 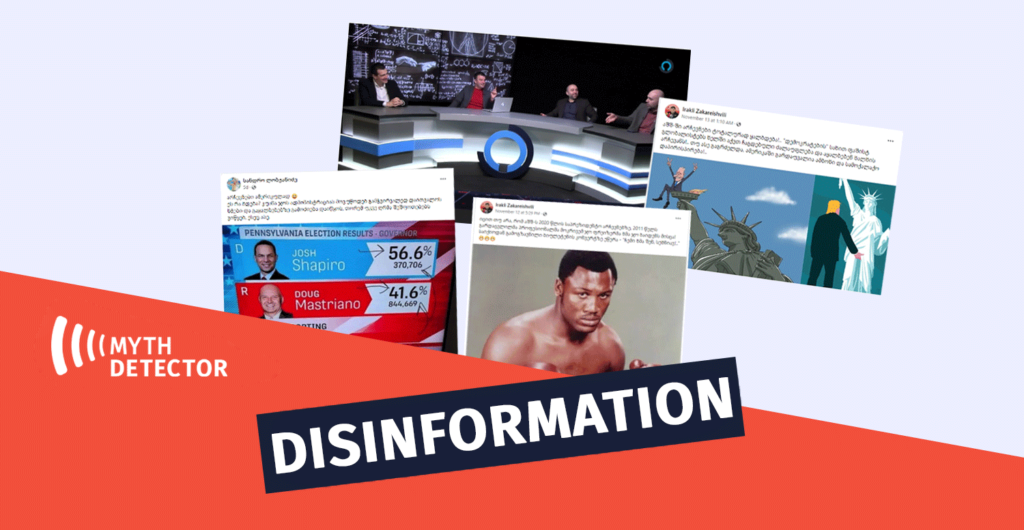 Following the November 8 midterm elections, social media saw a surge in various claims aimed at questioning the legitimacy of both the 2022 midterm and 2020 presidential elections in the US.

On November 10, Facebook users disseminated a photo of an infographic showing the results of the Pennsylvania governor election, which displayed the data incorrectly. According to the infographic, the Democratic candidate received 56.6% of the votes and the Republican candidate – 41.6%. According to the post’s author, false statistics hint at election fraud.

Georgian lawyer Irakli Zakareishvili has also devoted a post to the midterm elections, arguing that the elections in the US are “completely falsified” and that “fascist globalists in the form of democrats have seized power”. In the following post of November 12, Zakareishvili asserted that the famous boxer Joe Frazier, who died in 2011, allegedly voted for Joe Biden in the 2020 US presidential elections. The 2020 US presidential election was also called rigged by the pro-Kremlin “Alt-Info” TV program “Alt-Analytics”. 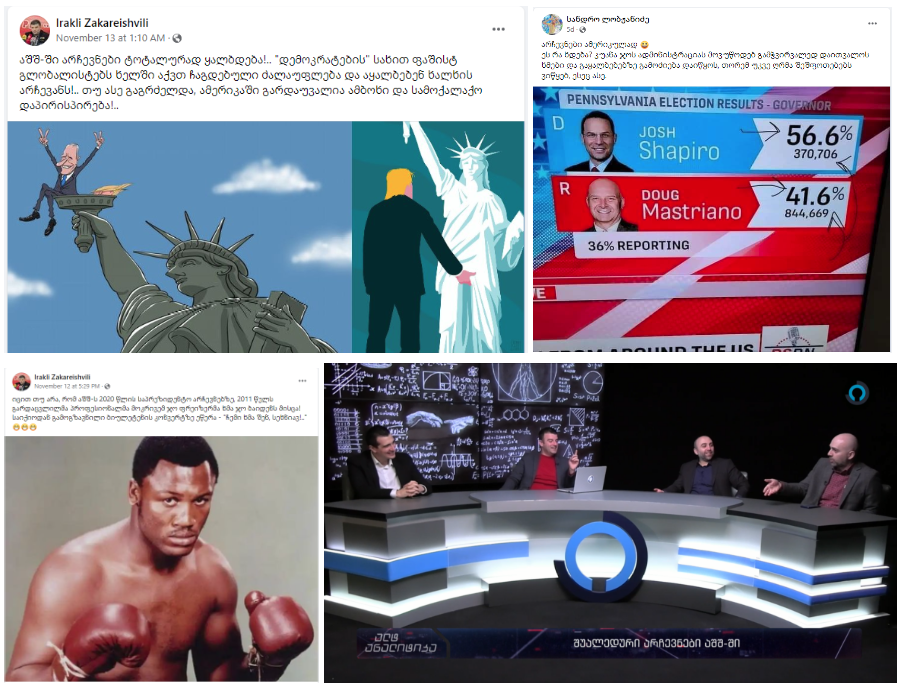 The claims and accusations about the allegedly fraudulent nature of the US elections are false. 1. State officials and election observers note that no significant problems were detected on the day of the elections, while the observed minor flaws do not indicate election fraud. 2. The error made in the infographic showing the results of the Pennsylvania gubernatorial election resulted from a technical error and was quickly corrected by the TV station; The cannot be used as proof of election fraud 3. The claim that the 2020 US presidential election was rigged is false. 4. The information that Joe Biden received a vote from the deceased boxer in the 2020 elections is false as well.

No fraud cases have been detected in the November 8, 2022, US midterm elections. The American publication Associated Press notes that voters did not have any serious problems with voting on election day, although former US President Donald Trump and some Republican politicians used some errors to cast doubt on the credibility of the elections. Nevertheless, experts note that the day of the election went smoothly, while the minor flaws observed are typical for all elections.

Jennifer Morrell, a former representative of the Colorado and Utah state election commissions and an election security and administration consultant, noted that poll workers were quick to deal with issues and demonstrated that the security measures designed to ensure accurate vote counts are effective.

Jen Easterly, director of the federal Cybersecurity and Infrastructure Security Agency, said there is no indication that votes in electronic voting systems have been deleted, lost, altered or compromised or that there has been a problem with the system across the country.

Sylvia Albert of Common Cause, a nonpartisan human rights group, said it is disturbing how isolated incidents are used to spread misinformation about elections to undermine public trust in the electoral system.

The Organization for Security and Co-operation in Europe (OSCE) published a preliminary report on the US midterm elections on November 9. Although the report mentions problems related to the pre-election period, such as the polarization of the political campaign and media, cases of threats and intimidation against candidates, their families, election system representatives and voters, while assessing the election day and the voting process, the OSCE report notes that the elections were competitive, professionally administered, and voter turnout was high. At the polling stations visited by international observers, the election process was orderly and peaceful. The report does not say anything about election fraud, and on the contrary, it is mentioned several times that the groundless accusations and false information related to the legitimacy of the elections in the pre-election period had a negative impact on the trust in the election system.

For more on the disinformation disseminated about the US midterm elections, see the articles prepared by “Myth Detector:”

The infographic shown on the photo published by the Georgian-language Facebook user on November 10 was aired on the program of the American TV channel RSBN. The channel covered the elections live. An infographic showing the votes for the two candidates, Democrat Josh Shapiro and Republican Doug Mastriano, appears live at 10:04 PM. According to the infographic, Shapiro had 56.6% – 370,709 votes, while Mastriano had 41.6% – 844,669 votes. The error in the numbers shown on the infographic was soon noticed by the host of the show, who asked to correct the data. 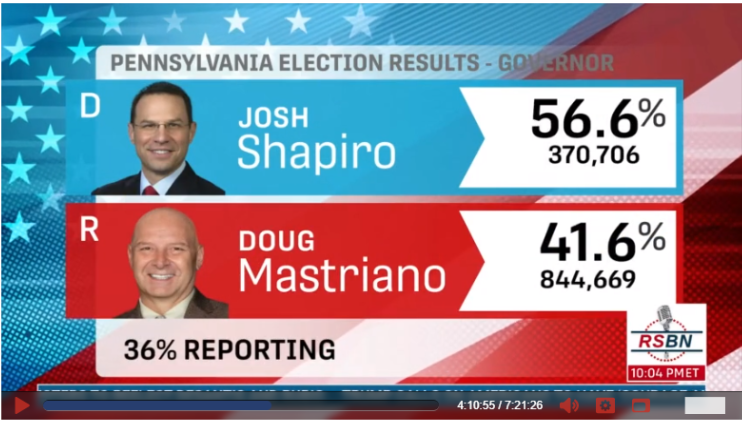 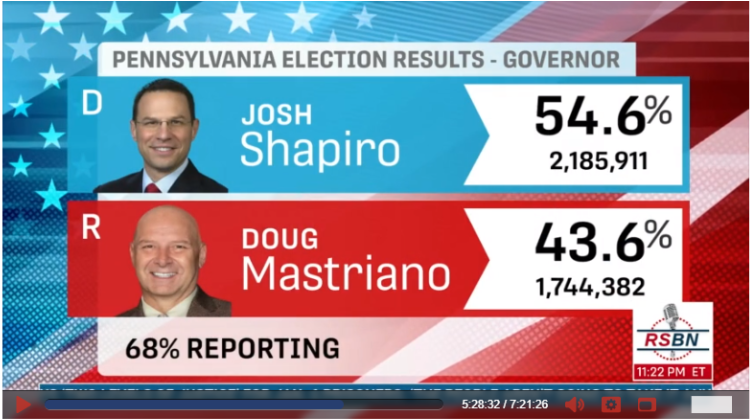 RSBN responded to the error with a press release, noting that due to a technical glitch during election coverage, the channel had to manually enter election data to display it on the infographic, causing the occurrence of the error. The channel apologized for misleading the public. The Associated Press verified the distributed infographic and other false claims about election fraud.

US federal agencies, courts, election commission officials, experts, government officials, and politicians (including members of the Republican Party) confirm that the 2020 US presidential election process was secure and fair. Fraud attempts are extremely rare, and there are strong security mechanisms in the electoral system to ensure the security of the vote. According to a statement released by the US Department of Homeland Security’s Cybersecurity and Infrastructure Security Agency, the 2020 presidential election was the most secure election in US history, and there is no evidence that votes were deleted, lost, altered, or otherwise compromised in any election system. Claims circulating on social media questioning the legitimacy of the 2020 US presidential election are baseless, although they have been circulating since 2020 in various forms. Myth Detector has fact-checked similar claims in the past:

The claim that in the 2020 presidential election, Joe Biden received a vote from a deceased boxer was voiced by Rudy Giuliani, the lawyer of the 45th president of the United States, Donald Trump. Giuliani’s claim was fact-checked by USA Today in 2020. In fact, there is no evidence that dead people voted in the US presidential election in Philadelphia. According to the Pennsylvania Attorney General’s Office, the court did not find any irregularities in the Pennsylvania state voter list. The same information about the absence of such a violation was confirmed by Kevin Feeley, a spokesman for the Board of Elections and the Philadelphia City Commissioner Al Schmidt. Schmidt said his office was particularly interested in the list of dead people who allegedly voted in the election, but an investigation found no such case.