On November 22nd, 2022, Levan Nikolaishvili, a pro-governmental expert, responded to the statement of the US ambassador to Georgia, Kelly Degnan. Degnan’s statement concerned the comments made by David Kramer, executive director of the George W. Bush Center, on the imposition of sanctions on Bidzina Ivanishvili. Nikoleishvili criticized Kelly Degnan for the comment where the US ambassador said that Kramer knows Georgia well, is worried about its fate and cares about it. In this context, in the form of a Facebook comment, Nikolaishvili asked to what extent the fact that Kramer offers Georgia NATO membership in exchange for renouncing Abkhazia and Samachablo can be considered as an expression of benevolence. 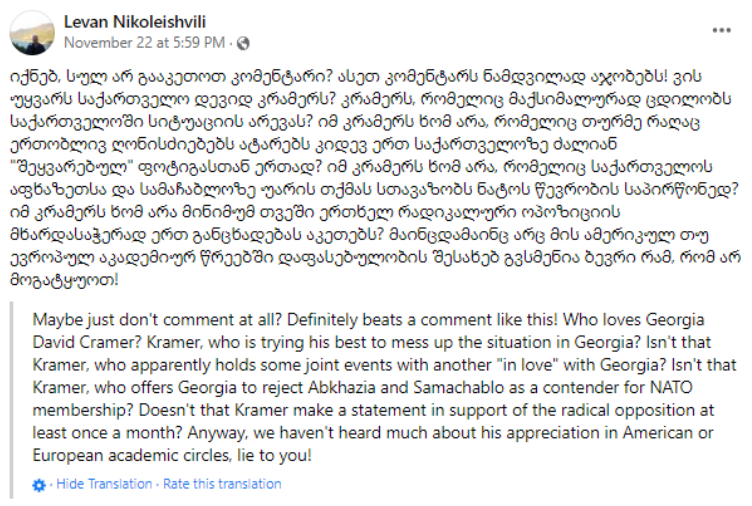 Nikoleishvili’s post was distributed by the following pro-governmental media outlets in a coordinated manner: POSTV, imedinews.ge, lideri.ge, xnews.ge, for.ge, kvira.ge, reportiori.ge, info 9, nsp.ge, newspress.ge. Notably, the aforementioned media published Nikoleishvili’s post with identical headlines, drawing attention to the alleged concession of Abkhazia and Samachablo in case of joining NATO: “Levan Nikoleishvili to Kelly Degnan: Who loves Georgia, David Kramer? Isn’t that the one who offers Georgia to give up Abkhazia and Samachablo in exchange to NATO membership?”.

Levan Nikolaishvili’s claim as if Kramer promises Georgia NATO membership in exchange for giving up on Abkhazia and Samachablo is manipulative. Pro-Kremlin actors have been linking manipulative assessments regarding Article 5 of NATO with Luke Coffey’s initiative for years. The mentioned initiative involves the accelerated integration of Georgia into NATO and the extension of Article 5 to the occupied territories after the restoration of Georgia’s territorial integrity. The initiative by Coffey was voiced by Anders Fogh Rasmussen at the EPRC conference in 2019, and Levan Nikolaishvili’s manipulative comment is linked to David Kramer’s comment on this initiative.

In 2019, David Kramer commented on the statement of former NATO Secretary General Anders Fogh Rasmussen about the occupied territories of Georgia and the integration of Georgia into NATO. The initiative first appeared in a 2018 report by Heritage Foundation columnist Luke Coffey. According to the mentioned initiative, in the case of Georgia joining NATO in an accelerated manner, Article 5 of the NATO Charter, which concerns collective defence, should be extended to the territories of Georgia occupied by Russia after Georgia regains control over these territories.

In 2019, Rasmussen spoke about the same initiative at the Economic Policy Research Center (EPRC) conference, noting that Georgia could start a discussion on whether it is acceptable for the country to join the alliance, given that Article 5 could cover only the territories controlled by the government of Georgia. Rasmussen cited the precedent of Germany as an example and noted that although Germany was divided into two parts, although it joined NATO in 1955, NATO rules only applied to West Germany until 1991, and after reunification, these rules were extended to East Germany as well.

David Kramer clarified Rasmussen’s statement, noting that he meant how to open NATO’s door for Georgia without giving Russia a veto factor over Georgia’s aspirations. According to Kramer, this does not entail the recognition of Abkhazia and the so-called South Ossetia as independent states.

Notably, Kramer has supported the territorial integrity of Georgia several times. Last time, in September 2022, he visited the village of Odzisi, adjacent to the occupation line, stressing that this visit of the delegation is an expression of support for Georgia’s sovereignty and territorial integrity, and that support for Georgia will continue in the future, so that one day Georgia will be reunited within its internationally recognized borders.

The manipulative claim as if Georgia will have to give up territories occupied by Russia in exchange for joining NATO has been voiced by pro-Kremlin media, and actors for years now, including Irma Inashvili, the leader of the “The Allaince of Patriots’ of Georgia”, Nino Burjanadze, the chairman of “United Georgia – Democratic Movement”, Tamaz Mechiauri, former member of the “Georgian Dream.” Among the media, pro-Kremlin media “Saqinform” journalist Arno Khidirbegishvili, Tvalsazrisi.ge, and others.

For more on the topic, see the articles prepared by “Myth Detector:”

The statements by members and supporters of the ruling party against David Kramer intensified after Kramer made a statement about sanctioning the founder of the “Georgian Dream”, Bidzina Ivanishvili. According to Kramer, without sanctions, the country is clearly going in the wrong direction, and although Ivanishvili does not have an official role in the government and the party, he is the person who actually controls these processes, which is why specific sanctions should apply to Bidzina Ivanishvili and the people who follow his orders.