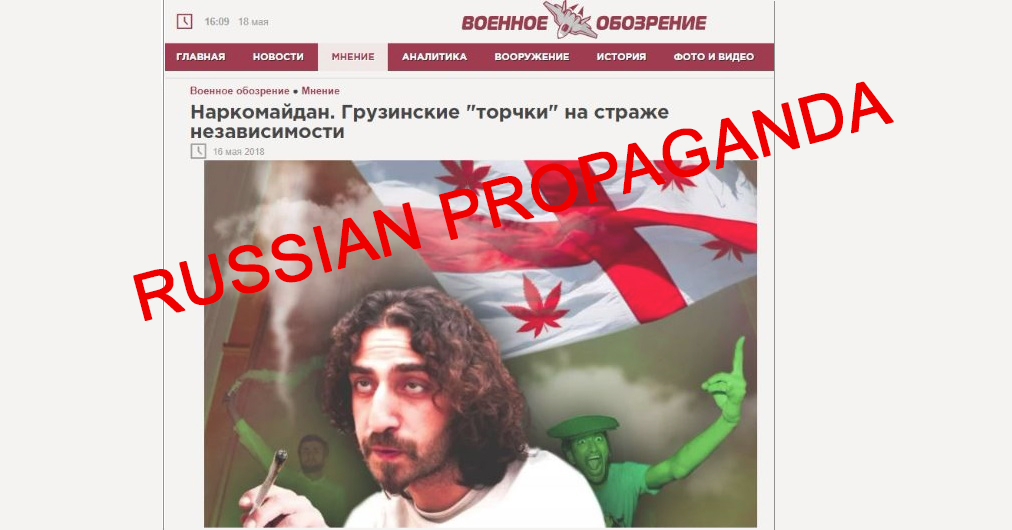 NarcoMaidan – this is how Russian news websites have dubbed recent protest rallies held outside the Parliament building in Tbilisi on May 12-13, following police raids on two night clubs in the capital.

In the article “NarcoMaidan: Georgian “Drug Addicts” for Independence” released on May 16, the news website Военное Обозрение assessed the May 12-13 developments in Tbilisi, providing manipulative description of facts, stigmatizing the protesters and inciting anti-Western sentiments. The article describes the young people who gathered on the Rustaveli Avenue as “an opposition-minded rallying biomass.” In addition, speaking about the reasons and goals of the rally, the article notes that young people with hipster fashion style initially tried to stage a rave evening on the capital’s main thoroughfare, but later decided to create “the future of European Georgia.”

The author notes that the organizer of the rally, the White Noise Movement, actively supports “modern European values, from bare-assed LGBT rallies to drug policy legalization.” The article also mentions Beka Tsikarishvili, leader of the White Noise Movement, claiming that Tsikarishvili accompanied by his “adepts” regularly visits Europe for raising qualification and upon his return to Georgia he educates his “illiterate” compatriots about European democracy ideas.

The article accuses Georgian media outlets of impartial coverage of developments, citing Rustavi 2 TV as an example. The author claims that Rustavi 2 TV is affiliated with ex-President Mikheil Saakashvili and that it has repeatedly become a target of criticism for inciting hatred against the Russians.

Finally, the author criticizes an opinion according to which the Georgian government is “pro-Russian”, saying that the two countries have cut diplomatic relations and they communicate with each other only at an informal level. According to the article, it is the Georgian side rather than Russia that is interested in regulating bilateral relations, because broad expansion of Georgian wine and citruses on European market has actually failed. Therefore, Georgia will mainly have to export its “drinks and fruits” to the Russian market. The author also adds that the Russian state will easily go without these “important” commodities.

Like Военное Обозрение, two other Russian websites – Мировое Обозрение and news.ru – also disseminated manipulative materials about the Tbilisi protests, dubbing them as NarcoMaidan.

Blogger Colonel Cassad of Russian Livejournal about the rally

Boris Rozhin, who runs the popular blog Colonel Cassad on Livejournal, wrote a blog about the recent developments in Georgia. Colonel Cassad’s Livejournal is ranked 4th among 10 most highly ranked journals.

The blog headlined NarcoMaidan in Tbilisi and released on May 14 also provides the photos depicting the Tbilisi rally and involving the author’s comments. Like other Russian websites, the blogger humiliates the protesters, saying that if the Georgians had been real Europeans, they would have legalized drugs, like Holland did it, but Georgia is a European country only by its name.

“If they [Georgians] had been real Europeans, they would have legalized drugs like Holland did it, but Georgia is a European country only by its name. No matter what they [Georgians] might do, they still receive Mordor.”

If Georgia legalizes drugs, the author offers the readers to dub it as “Amphetamine Revolution.” The blogger claims that Georgia will not succeed in its movement towards Europe without drug legalization.

“Movement towards Europe will not be completed without drug legalization. Noteworthy that Georgia was a once-flourishing Soviet republic…” Protest rally in Tbilisi. On May 12, the Georgian Interior Ministry carried out a double operation in Tbilisi’s Bassiani and Cafe Gallery clubs. Three hours later the Interior Ministry released a statement, saying that eight persons were detained on drug-related charges. Public Defender Nino Lomjaria said later that the drug trade suspects were detained by the police outside the club premises.

Hundreds of young people gathered in Tbilisi on May 13-14 to protest against police operations. The White Noise Movement demanded the resignation of the Prime Minister and the Interior Minister, as well as punishment of all those persons, who were responsible for the May 12 police operation. Several thousands of people gathered on the Rustaveli Avenue on May 13. The speeches by the leaders were later replaced by club music that had to be played by various Tbilisi-based clubs, part of which was closed because of police operation and another part – in solidarity. After the protesters who gathered outside the Parliament announced about their plans to mark the International Day Against Homophobia and Transphobia on May 17, Neo-Nazi groups also said that they would hold a counterdemonstration in an attempt to restrict freedom of expression by those persons who gathered outside the Parliament. On May 14, the Neo-Nazi groups managed to approach the protesters near the Parliament building but failed to break through police cordon.

Following the Georgian Prime Minister’s news briefing on May 14, additional reinforcements, including water cannons and riot police, joined the police cordons. Georgian Interior Minister, Giorgi Gakharia went to the rally and met with the leaders. After the meeting, the latter addressed the protesters saying that the Interior Minister promised that the work on liberal drug policy would continue and all those police officers, who used excessive force, would be punished. Minister Gakharia personally addressed the protesters and apologized for police handling of the operation. Soon, the protesters cleared the Rustaveli Avenue; they were escorted out of the area by municipal buses.