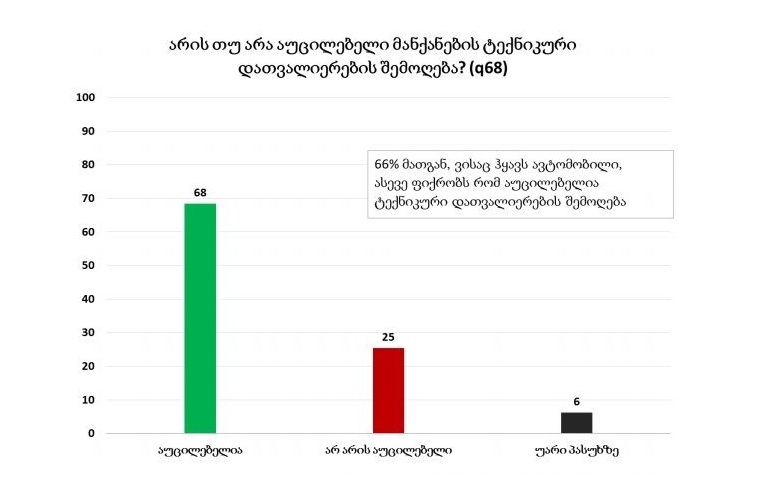 Part II: Necessity of compulsory periodic tests of the cars’ readiness for exploitation

Article VI of the Georgia-EU Association Agreement envisions deepening of cooperation in the transport sphere. In this regard, the Government of Georgia has to harmonize Georgian laws with the European ones.

European Directive 2009/40/EC of the Association Agreement establishes requirements towards vehicles’ technical parameters and their testing methods (instrumental and organoleptic). These parameters are: vehicles’ identification, brake system, steering system, visibility, electric gear, cabin, tires, exhaust, noise and others. Association Agreement does not demand immediate fulfillment of these requirements and the process is to be stage by stage.According to this directive, the timeframe for fulfilling these obligations for buses and trucks is 2 years, while for vehicles of other categories is 4 years.

The most popular myth concerns the notion that if compulsory periodic testing of vehicles of all kinds, including private cars, for their readiness for exploitation is introduced in Georgia, many of the Georgian car owners will have to stop driving their cars and corruption will reappear in the cars’ technical testing sphere.

Cars older than 15 years are used in Europe and other developed countries of the world, and they do pass technical testing. It is actually about basic safety norms, such as brakes, light, etc. As to the taxis, they are engaged in commercial activity, and, as they cover hundreds of kilometers a day, it is in their own interest to provide for the passengers’ and their own safety. In every country the cars that are used for commercial purposes are periodically checked for their readiness for exploitation.If the process of restoring technical testing for vehicles is done in Georgia transparently and payment for it is low, we shall have better safety on our roads, as well as better air.Besides, cars produced in 1990 will not be tested by the 2005 standard.

In Georgia, where corruption has been defeated in the patrol police and Ministry of Justice, and where transparent system of tenders exists, it will be easy to defeat corruption in this sphere as well.

The purpose of technical tests for vehicles is simple: to prevent people dying because of faulty cars or, for instance, tumors. The most popular counter-argument that testing will cause unemployment is dubious, since drivers of untested cars work under risk and endanger passengers, pedestrians and everyone else.

Examples of Belarus and Kazakhstan show that as a result of introduction of technical testing, taxi service in these countries has improved, while the prices have remained on their previous level. The threat of corruption exists in all services, but in the sphere of technical testing it is minimized through transparent and simple regulations and technology.

Article 45 prima of the law on the road safety was changes a number of times.The first paragraph of this article envisioned compulsory periodic testing only for specific types of vehicles from 13 September 2004 to 1 January 2013.

On 3 December Prime Minister Irakli Garibashvili stated at the government meeting that technical testing of vehicles will become compulsory, but public opinion must be studied prior to that. “I suggest that we conduct a study and find out what the people think on this issue.I think, this issue concerns everyone. One of the causes of tumors and other illnesses is the exhaust”, – said Garibashvili.He added that main causes of road accidents were right-wheeled and faulty vehicles.

Despite the widely spread notion that public is against these changes, NDI poll from August 2015 showed different picture. 68% answered ‘yes’ to the question ‘Is it necessary to introduce technical testing of vehicles?’.This poll was the first to demonstrate that for many respondents solution to the most problematic issues in their cities – pollution, roads, traffic and parking – is directly connected to creation of the safe, clean and affordable transport system.

On the basis of the present legislation testing is conducted for international traffic and internal regular traffic, also for transportation of hazardous cargo, as well as all vehicles capable of transporting 3 tons or more of cargo.

Many accidents in Georgia are caused by faulty private and public vehicles, but no statistics is so far collected in this regard, which is another problem.Georgia needs, first of all, to register more than a million vehicles existing in the country and their technical condition, since there is probably no country in the world without periodic compulsory technical testing, though in some places it is not very effective because of corruption .

Technical testing is necessary due to two simple reasons:

It is clear that it is necessary to regulate and put in order the work of taxis in Georgia, both inside and between cities. As a result, taxi drivers will be employed in orderly taxi companies, which will help this business and competition, since rules of investment will be clear for everyone and due to the competition prices will remain low. Technical testing can stimulate decrease of average age of vehicles and help this sector of business.

Legislation on the testing of vehicles and their trailers is already prepared in the ground transport administration. The public is ready for launch of this process, now the government, political parties and business need to work out policy that will be easily understandable for everyone and to conduct this process transparently. They understand very well in Europe that renewal of vehicles and restoration of technical testing in Georgia cannot happen in a single day, but they think that concrete steps in this direction need to be taken today. Otherwise, in 5 years Georgia will have 1,5 million faulty cars, causing problems not only in Georgia, but abroad as well.