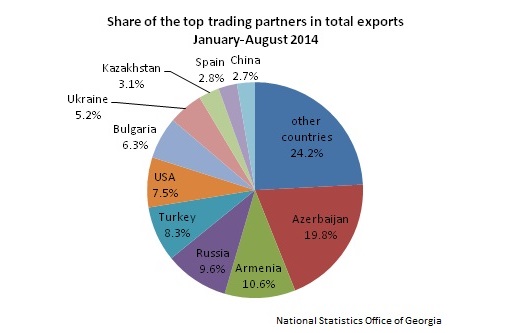 After the Russian Federation partially lifted the economic embargo in 2013, the volume of Georgian wine exports to foreign countries significantly increased. In particular, the value of exported Georgian wine amounted to 128 million USD which is almost a 100 percent increase on the corresponding indicator in 2012. By preliminary data, some 113 million USD worth Georgian wine was exported to foreign countries over the period from January to August 2014. A large portion of this increase accounted for the export to the Russian market (65 percent), however, a positive trend has also been observed in the export to other countries. Compared to 2012, in 2013 the natural wine export to EU countries doubled with even a larger increase seen in exports to separate EU countries; for example, Georgian wine export to the Netherlands increased by 250 percent in 2013.

Despite a significant increase seen in wine export, the share of this commodity in the total Georgian export comprises a mere 5.7 percent. Moreover, as compared to other main trade partners of Georgia, the share of the Russian Federation in the total Georgian exports is also small. Even though Russia apart from wine also allowed other Georgian agricultural products to its market since 2013, some 184 million USD products were exported to the Russian Federation over the period from January to August 2014, which makes up only 9.6 percent of the total Georgian exports. Over the same period Georgia exported 405 million USD worth products to the European Union, i.e. 21 percent of the total exports. In 2014, compared to Russia, higher volumes of Georgian products were exported to Azerbaijan (19.8 percent) and Armenia (10.6 percent). Export markets for Georgian products in 2014 also include Turkey (8.3 percent), the USA (7.5 percent), Ukraine (5.2 percent), Kazakhstan (3.1 percent) and China (2.7 percent), thus indicating about the diversification of Georgia’s export opportunities.

In July 2014, the Economy Ministry of the Russian Federation drafted a decree on suspending the Russian-Georgian Free-Trade Agreement signed in February 1994. As a result of that goods produced in Georgia will soon be subject to customs duty, thereby increasing costs of Georgian exporters and adversely affecting the competitiveness of Georgian products on the Russian market. At the same time, 1 September 2014 saw the enactment of that part of the Association Agreement signed between Georgia and the European Union, which envisages the creation of deep and comprehensive free trade area (DCFTA). The DCFTA will ensure duty free entry of Georgian products to the EU market, thus hugely contributing to the increase of Georgian exports to the world’s largest market.