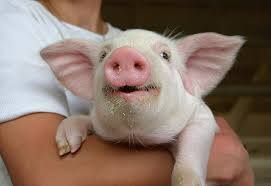 EU official structures have never required from Georgia to prohibit slaughtering of less than 1 year old domestic pigs. Such prohibition does not apply in any of the EU member countries. However, EU legislation provides for some standards of treatment of animals which is mandatory to observe.

The Order No. 2-101 (dated 4 July 2011) of the Minister of Agriculture regarding adoption of the rules on veterinary-sanitary safety, as well as the Decree No. 444 of the Government of Georgia provides for minimum age of animals subject to slaughtering to be 14 days. This is the only limitation which is provided under Georgian laws and is fully in line with EU standards.

In EU animal welfare standards are based on so called “five freedoms” principle, which serves the purposes to prevent animal cruelty:

The Five Freedoms principle was developed as a result of research made by UK in 1965 and soon was recognized, including by the world animal health organization. Later animal slaughtering standards as a indispensable part of animal welfare were added to this principle. These standards include such methods of treatment of animals before slaughtering, which ensure decrease of stress; carrying out of slaughtering process by competent personnel and with appropriate equipment.

According to EU contemporary approach to food safety, the animal meat taste much better when the animal is free of stress. Under the EU approach to receive safe food it is necessary for the animal not to experience pain and suffering before slaughter.

Within the harmonization process with EU regulations, Georgia has already adopted Food/Animal Food Safety, Veterinary and Plant Protection Code and other normative acts.

In Europe, the very first law on animal protection was adopted in UK in 1822. After two years, in 1824 a Royal Society for Prevention of Animal Cruelty (RSPCA) was established. During this time, the main focus of the law was on prevention of animal cruelty and for protection of which special inspector was appointed. From 1933 reflecting the animal welfare standards in laws was already an irrevocable process. In 1965 UK created committee to work on animal welfare issues under Professor Roger Brambel which introduced the Five Freedoms principle.