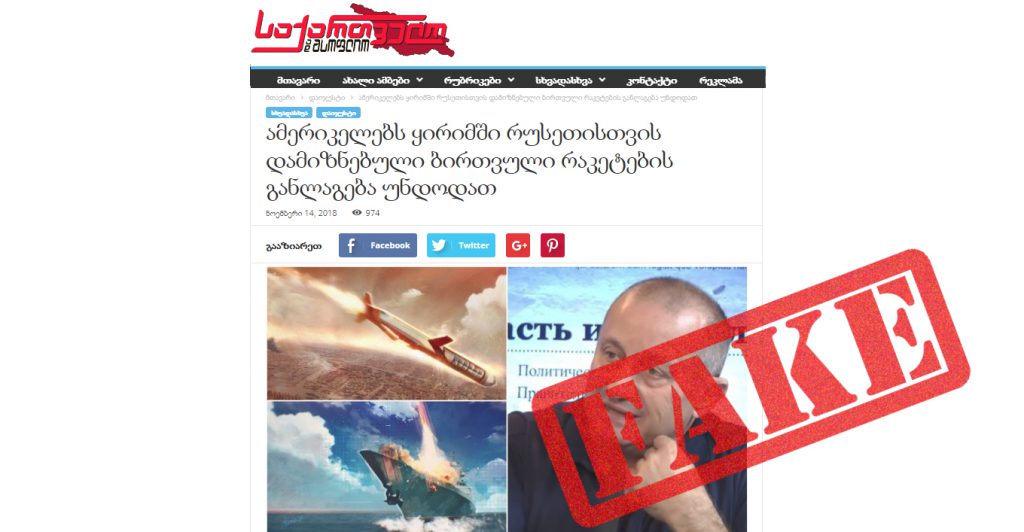 On November 14, a web portal Georgia and the World (Geworld) published an article titled: “Americans Wanted to Place Nuclear Missiles, Targeted at Russia, in Crimea.” The article includes an interview of a Russian internet-TV ITON TV with Jacob Kedmi, the former Head of the Relations with the Soviet Union’s Jewish Diaspora – Натив, who states that the United States wanted to place a military base in Sevastopol, Crimea, from where it could shell the territory of Russia using the Tomahawk cruise missiles. As Jacob Kedmi claimed, Russia disrupted the United States’ plan on the placement of the military base by annexing Crimea. In the same interview, Kedmi labels the 2013-2014 Maidan events as a gamble by the United States and a coup d’etat, provoked by the latter.

The claim that the United States wanted to place nuclear missiles in Crimea is an attempt to justify the annexation of Crimea. The 1936 Montreux Convention Regarding the Regime of the Galli Straits restricts those military ships from entering Black Sea that do not belong to any of the Black Sea nations. Therefore, the scenario, according to which the United States planned to place a military base in Sevastopol is, from the legal point of view, impossible. The sole nation that had already placed bases in Sevastopol Port, was Russia, whereas the aggression, undertaken by Russia in 2014, was offensive, in its nature.

The placement of the United States military base in Sevastopol Port could not have been a real threat, as Russian navy and its bases were already located in Sevastopol prior to the annexation. Russia retained its right to have its militaries and navy in Sevastopol Port until 2042, based on a Treaty signed with Ukraine in 2010. Moreover, the maximal timespan for a ship, sailing under the United States’ flag, to stay in Black Sea is 21 days, which does not provide for the opportunity to create a permanent military base. The Montreux Convention, signed in 1936, restricts placement of those military ships in Black Sea that do not belong to any Black Sea nation.

The annexation of Crimea by Russia did not serve the purpose of defending against some hypothetical attack, but rather was a part of Russia’s aggressive foreign policy objectives.

According to 2015 Maritime Doctrine of the Russian Federation, it is a declared goal of Russia to become both global and regional maritime power. As Russia’s New State

Russian Armed Forces occupied the Autonomous Republic of Crimea in February 2014. In March 2015, Russia annexed Crimea and made it a part of Russia based on an illegitimate referendum. The annexation of Crimea is a violation of principles of international law and it became a reason for the United States and the EU to impose sanctions on Russia. The annexation of Crimea by Russia was followed by protests against the pro-Russian President of Ukraine, Viktor Yanukovich, and, subsequently, the Maidan Revolution.

Similar to the Georgia and the World, Russian Troll Factory has disseminated Jacob Kedmi’s claim that Russia annexed Crimea for defense purposes.

On February 28, 2018, a Troll Factory project, ФАН, published a quote identical to Jacob Kedmi’s. Georgia and the World attached the photo, published by ФАН, to its article. 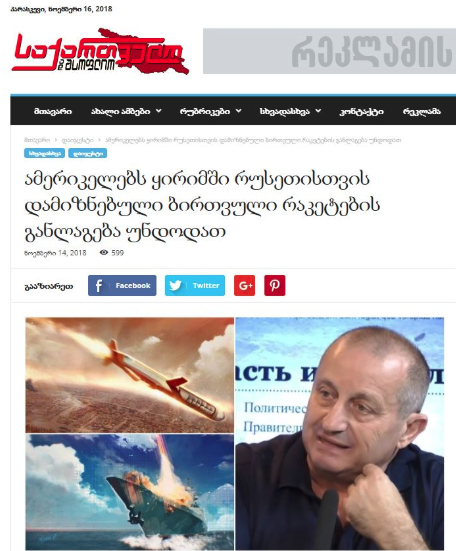 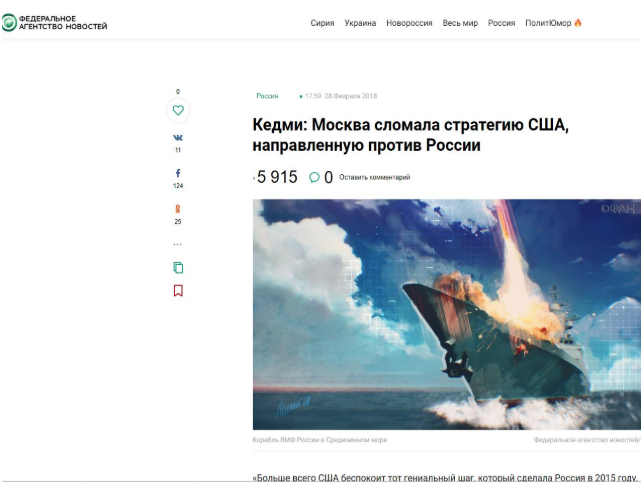 ФАН is a project by the Russian Troll Factory. In April 2017, a Russian edition РБК published the results of a journalistic investigation that showed that the activities of the Russian Troll Factory encompassed 16 pro-Kremlin media outlets. The media outlets are parts of the media holding Федеральное Агентство Новостей (ФАН) and disseminate each other’s materials systematically.