“Modified” and New Facebook Accounts in Support of Gakharia, Old Pages Against Him 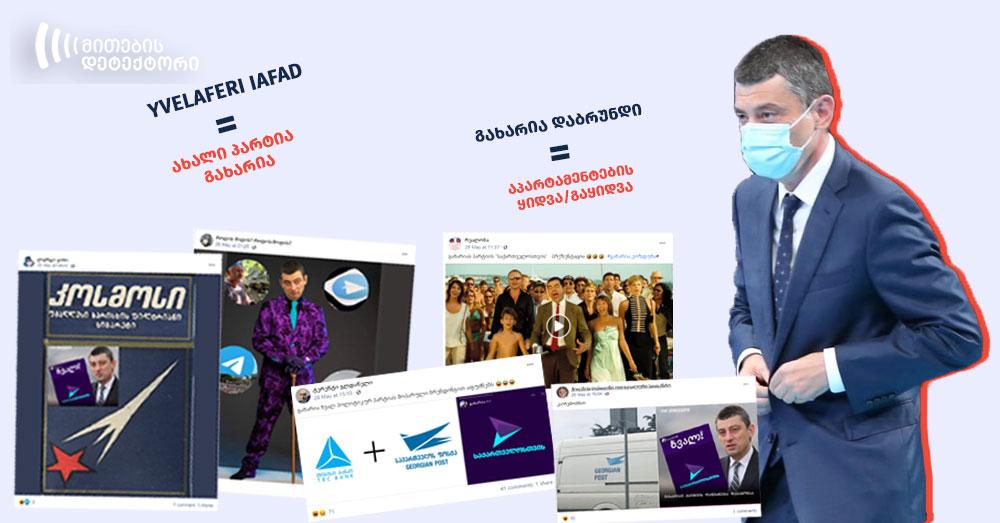 On May 29, former Georgian Prime Minister Giorgi Gakharia inaugurated a new political party “For Georgia.” Gakharia was elected as the chairman of the party at the inaugural congress. The inauguration of the new political party triggered mixed reactions on social media. Part of Facebook pages supporting the government and discrediting the opposition, as well as Facebook pages supporting the opposition tried to mock at Gakharia’s party with humorous posts. Others published a sponsored post, recalling Gakharia’s earlier statement, when then Prime Minister threatened with ending the opposition United National Movement party. The new party was also criticized by ultranationalist movements, who suggested that “For Georgia” was a “liberast version” of the ruling Georgian Dream party, while pro-government experts claimed that Giorgi Gakharia and opposition parties or pro-opposition TV channels had common interests – to seize Georgian Dream’s votes, thus weakening the ruling party.

It is noteworthy that one of the Facebook pages  მოღალატე გახარია (Treacherous Gakharia) was created on May 26, two days before the inauguration of Gakharia’s party.

A number of pages and groups emerged on Facebook following Giorgi Gakharia’s resignation on February 18. Nine Facebook groups were created in a period between February 18 and February 28 in support of the former Prime Minister. One of these groups “გახარია დაბრუნდი” (Gakharia Return) changed its name on April 26 to აპარტამენტების ყიდვა/გაყიდვა (Apartments for Sale/Purchase).

Six new groups were created in March and April 2021 in support of Giorgi Gakharia:

Two groups were identified that had changed their initial profiles. For example, the group “Gakharia Return” created in February 2021 changed its name on April 26 to აპარტამენტების ყიდვა/გაყიდვა (Apartments for Sale/Purchase).

Six more groups supporting Gakharia emerged on Facebook in May, shortly after the new party “For Georgia” was inaugurated.

A Facebook page მოღალატე გახარია (Treacherous Gakharia) was created on May 26, 2021, several days before the inauguration of Gakharia’s party. As of June 1, the page has published four posts targeting Gakharia.

Two video collages published on the page compare the statements made by Gakharia during his party inauguration and when he served as the Prime Minister, highlighting his changed positions about the National Movement and nepotism. 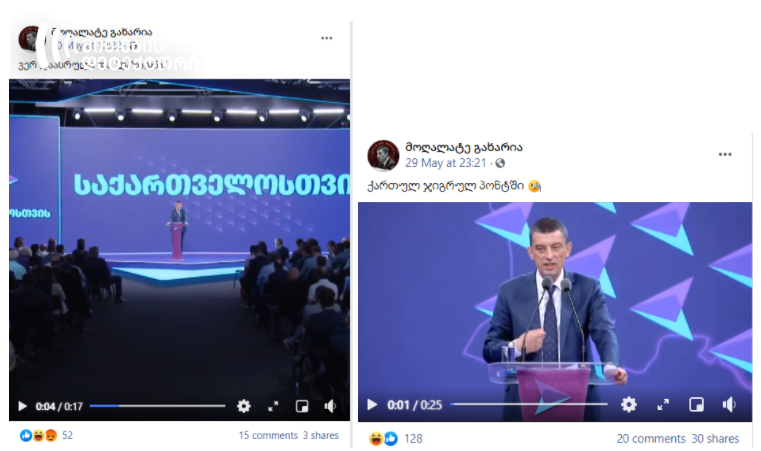 In a video uploaded on May 30, the same page reminds us, along with providing Gakharia’s nepotism-related statements, that the former Prime Minister’s wife bought an apartment in France in 2020. 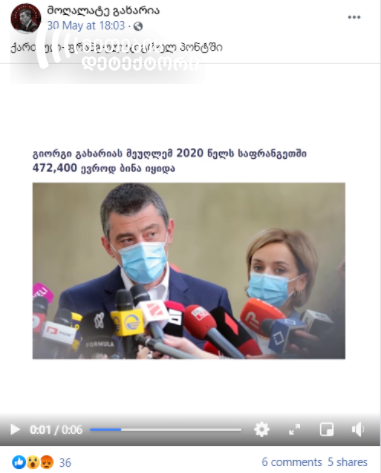 In its first post, the newly created page compares Gakharia’s new party logo to the logos of Georgian Post and TBC Bank. 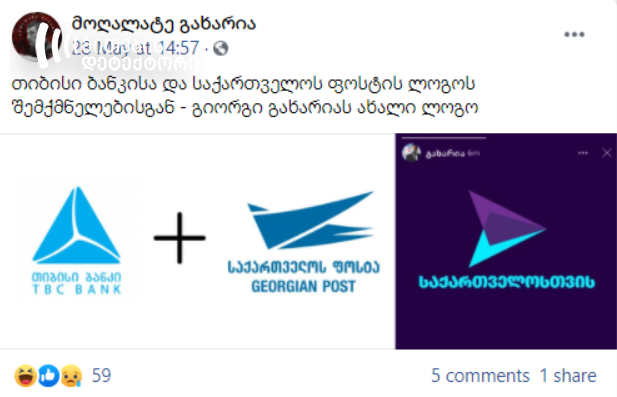 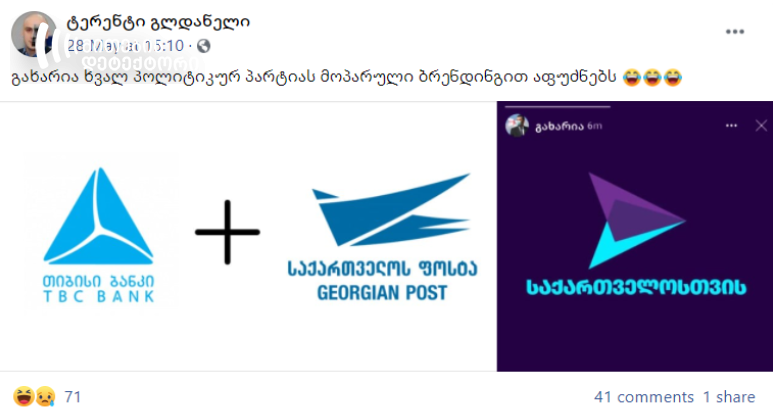 On May 29, არქივი • Archive, an anti-opposition page, spread Giorgi Gakharia’s video, where then Prime Minister dubs the National Movement as street opposition and threatens to end it. It is noteworthy that the post published on the page is sponsored: 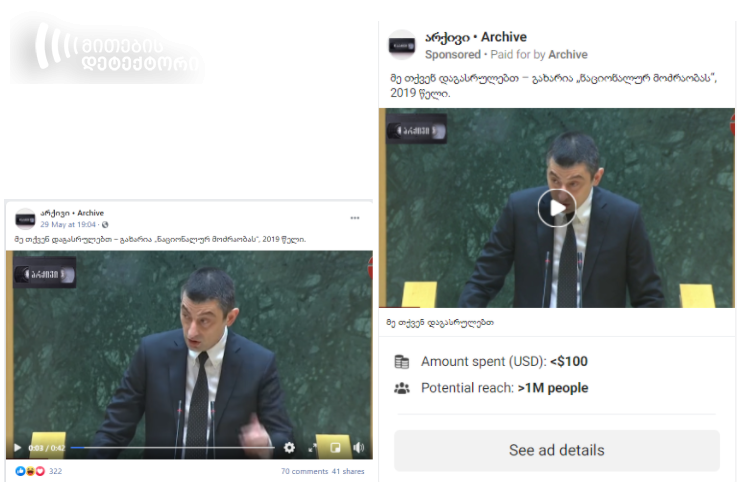 ტერენტი გლდანელი (Terenti Gldaneli), an anti-opposition page, also uploaded a video collage showing Gakharia’s changed rhetoric towards opponents. The video collage unites the statements made by Gakharia at a meeting with journalists and earlier, when he served as the Prime Minister: 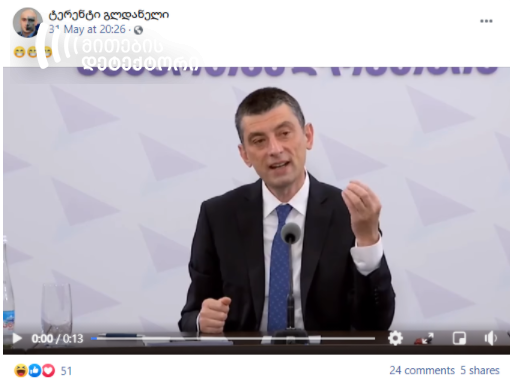 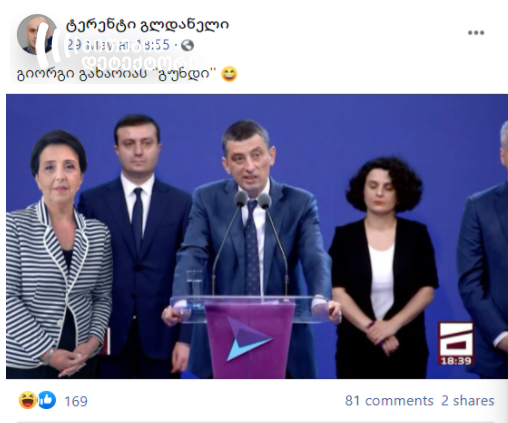 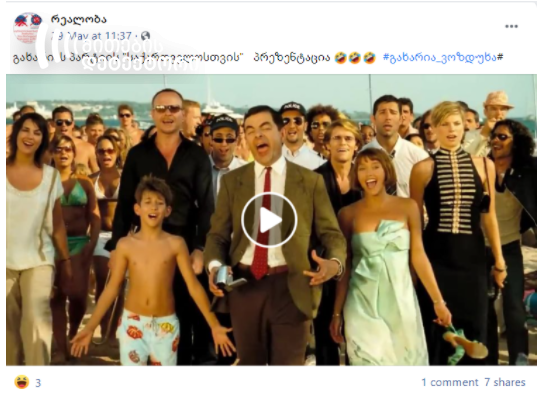 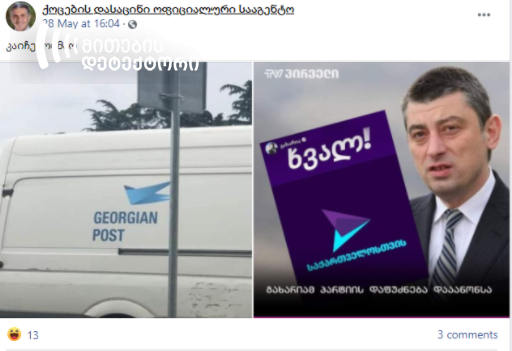 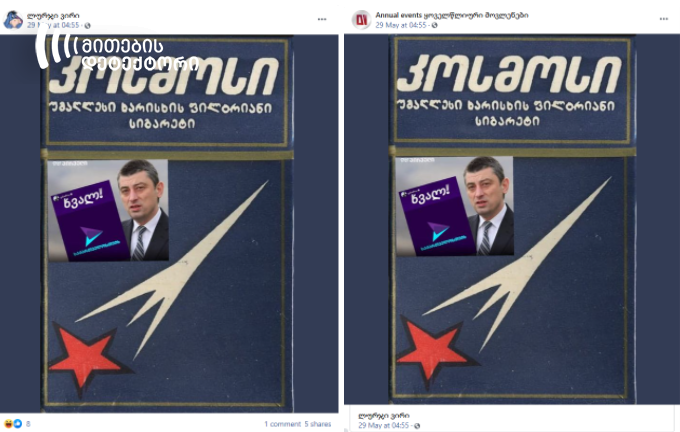 Two Facebook pages როდის მიდის? როდის მოდის? and ლურჯი ვირი spread a photo, in which Gakharia, who is wearing a Joker costume, creates the logo of his new party, also involving the logos of Georgian Post and TBC Bank. 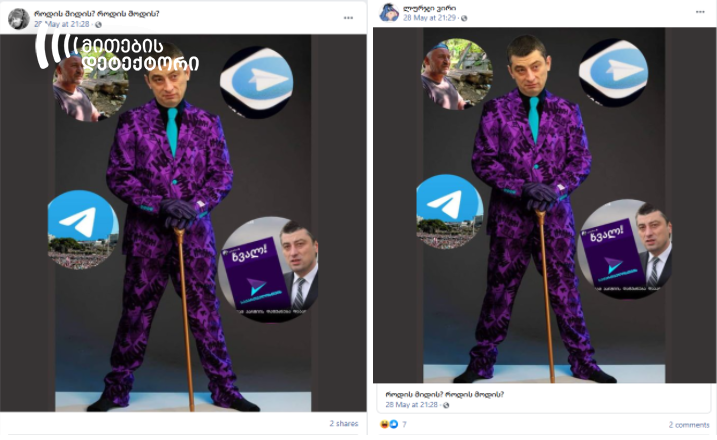 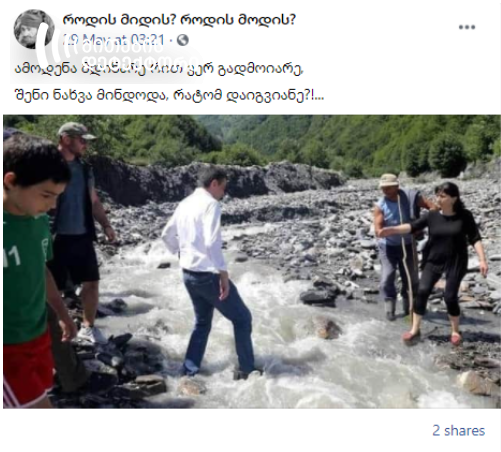 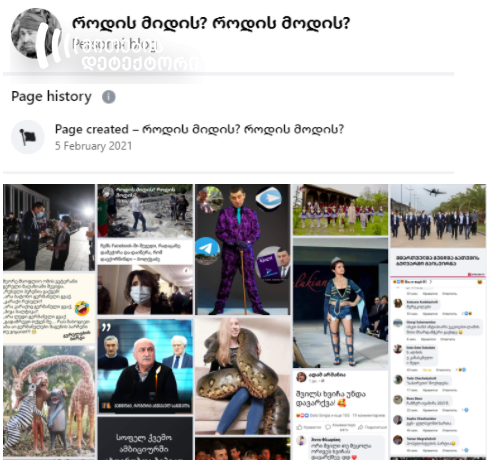 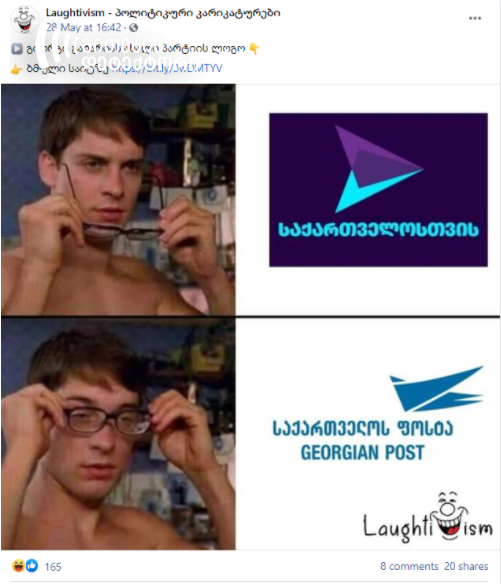 According to the website description, Laughtivism is the first-ever web platform of caricatures in Georgia, where social and political issues are subject to satirical criticism.

The post published by Khatuna Saginashvili, editor of Kvakutkhedi (Cornerstone) magazine, about Gakharia’s wife allegedly having purchased an apartment worth half a million Euro in France was shared by religious Facebook page Qvakutxedi ქვაკუთხედი. 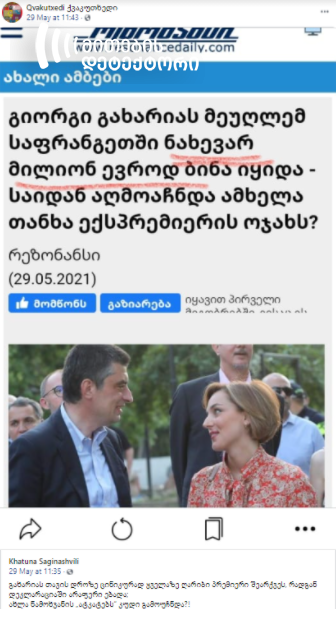 Later the same day, an identical screenshot was published on the Facebook page of Irakli Jankarashvili, writer for pro-Russian online media outlet, tvalsazrisi.ge. 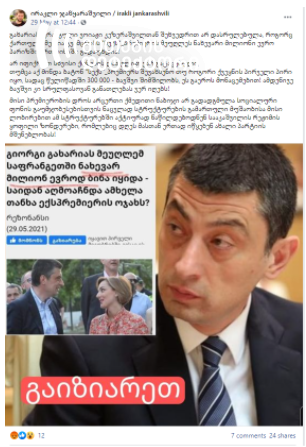 Pro-government experts have voiced identical messages about Gakharia’s new party. In their opinion, the new party, together with the National Movement and other parties, will try “to seize” Georgian Dream’s votes and prevent the ruling party from garnering 43% of votes in local elections that will ultimately decide the fate of the early parliamentary polls. Like Irakli Kobakhidze, chairman of Georgian Dream, who accused TV Pirveli and Formula TV of promoting Gakharia and noted that it arouses doubts about him, pro-government experts also stressed the interest of government-critical media towards the former Prime Minister.

Natia Mezvrishvili – a target of antiliberal and pro-Kremlin groups

Gakharia’s teammate, Natia Mezvrishvili also became a target of criticism. On May 29, Beka Vardosanidze, a supporter of Georgian businessman Levan Vasadze’s party, spoke about her during a live stream. He claimed that Mezvrishvili is an LGBT activist, who signed the Istanbul Convention:

Beka Vardosanidze, supporter of Levan Vasadze’s political party “Unity, Essence, Hope”: “For years, I had been insistently calling on Georgian Dream and its supporters to choose a correct path, showing them an example of how to act, whom to partner with and which ideology to choose. I was pushing him [Gakharia] towards Trump and he failed to go beyond Mike Pompeo and Natia Mezvrishvili. We will definitely talk about Mezvrishvili as well, we will talk about what the Istanbul Convention means that was proudly signed and then covertly ratified by her… and now this LGBT activist, Natia Mezvrishvili, a friend of Babutsa Pataraia, is proud of doing that.”

Natia Mezvrishvili’s personality was also discussed on Alt-Info. One of its hosts, Zurab Makharadze said that the values of this party are quite clear especially after seeing Natia Mezvrishvili among Gakharia’s teammates:

Zurab Makharadze, host: “What does this woman actually represent, in essence… Shortly, she is a friend of Baia Pataraia and she is one of Gakharia’s teammates. Thus, it is quite clear what platform Gakharia will choose, whether it will contain conservative elements, whether the party will confront the National Movement and let’s not argue about it… It will be a more liberast version of Georgian Dream.”

Giorgi Gigauri, a journalist of Georgian tabloid Asaval-Dasavali, also spoke about Natia Mezvrishvili, calling her “zonder-gender” and accusing her of jailing hundreds of men on charges of domestic violence.

Giorgi Gigauri, journalist: “Any normal person knows that Gakharia signed the November 11, 2019 document on selling the Rioni Gorge when serving as the Prime Minister! It is also known that among Gakharia’s teammates is his old associate and Baia Pataraia’s friend – zonder-gender Natia Mezvrishvili who served as Deputy Interior Minister, when Gakharia was the Interior Minister, and who jailed hundreds of men on charges of domestic violence through enacting zonder-gender laws.”