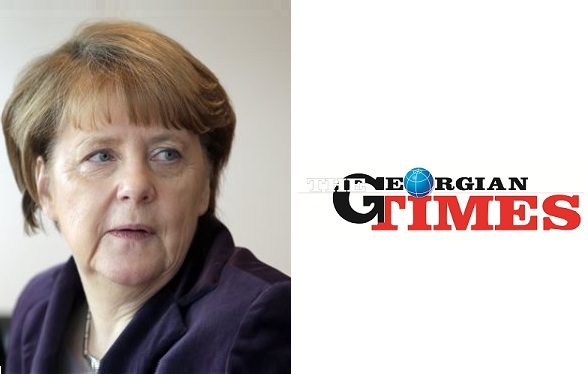 On June 6, the online edition of the newspaper Georgian Times published the news entitled “Angela Merkel supported to create the EU’s common trade zone with Russia”.

According to Georgian Times, at the meeting of Christian Democratic Union held in Mecklenburg, the Chancellor of Germany said that she supports to create common trade zone of the EU and Russia. The news indicated Merkel’s quote and the initial source – German newspaper Frankfurter Allgemeine Zeitung.

According to the article by Frankfurter Allgemeine Zeitung published on June 3, at the Mecklenburg Angela Merkel said that only after Russia fulfills its commitments within the framework of the Minsk Agreement, it is possible to talk lifting sanctions on Russia imposed by the EU. The precondition, that economic cooperation is only possible if Russia fulfills Minsk peace agreement was also highlighted in the title of Reuter’s article published on June 10.

According to Frankfurter Allgemeine Zeitung, the Chancellor noted that throwing principles to the wind in the face of Russian action in Ukraine is not right. In eastern Ukraine, a civil war is being waged with Russian support and the sanctions were introduced.

Only at the end of the article, Georgian Times mentioned that the precondition of deepening economic relations with Russia is to fulfill the requirements of Minsk Agreement. The title did not include such essential detail, which is misleading.

The history of EU-Russia trade relations

The basis of the cooperation between EU and Russia was 1994 Partnership and Cooperation Agreement (PCA). Hereafter, it was followed by new agreement which deepened mutual relations included economic cooperation, trade, investment, energy sector. This covered the cooperation in 4 policy areas: economy & the environment; freedom, security & justice; external security; research and education.

In 2014, as a result of illegal annexation of the Crimea by Russia most EU-Russia cooperation programmes, including trade, economy and energy areas have been suspended.

The European Investment Bank (EIB) and the European Bank for Reconstruction and Development (EBRD) have suspended the signing of new financing operations in Russia.