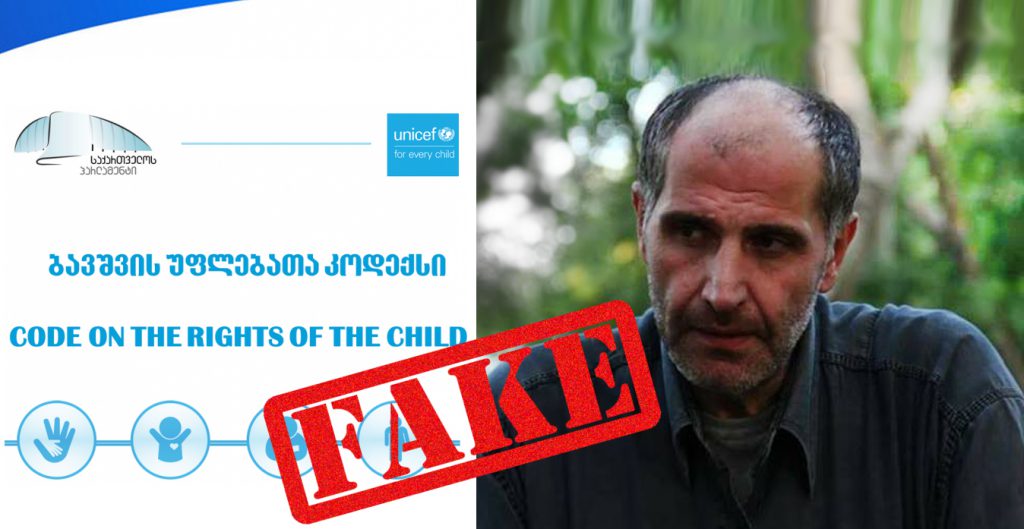 On March 21st, 2019, the online edition Georgia and the World published an interview with a director Guram Kartvelishvili, under the headline: “Guram Kartvelishvili: The government with which all the foreign agents work, except the Georgians, should not be called a government; accordingly, such country is a failed state”. Kartvelishvili notes in the interview that the goal of the Code on the Rights of the Child is to destroy families. According to him, the draft of the Code states that Georgian fathers are not tolerant and forgiving towards their daughters.

Guram Kartvelishvili’s statement that the Code on the Rights of the Child includes a paragraph which refers to the Georgian fathers as intolerant, is a lie. The features of “a Georgian father” are not mentioned in the Code.  This opinion was instead voiced in the UNICEF-2018 study, which explored how parents/caregivers of young people view the parenthood. The survey was based entirely on interviews and focus groups.

1. The Code does not mention that “Georgian fathers are intolerant”.

There is no definition of characteristics of either Georgian fathers or fathers of any other nationality in the Code on the Rights of the Child. The Code does not say that Georgian fathers are not tolerant and forgiving.

2. The opinion that Georgian fathers are not tolerant is an idea developed in the UNICEF survey from 2018, which is based solely on interviews and focus groups and this document does not have any connection with the Code.

The relationship between fathers and daughters in Georgia is mentioned in the 2018 survey by the UN Children’s Fund (UNICEF), which explores the issues of parenthood and the situation regarding this issue in Georgia. Research methodology includes in-depth interviews and focus groups, therefore, research results are based entirely on opinions of specific individuals.

Discussions in focus groups show that “the fathers do not show the tolerance towards their daughters, unlike their sons, when it comes to pre-marital sexual or intimate relationships”. The study noted that fathers of adolescent daughters perceive talks about sexuality as a threat because they believe that talking about such topics will cause and accelerate their children’s interest and desire towards sex, which eventually will create problems for the family.”

3. One of the objectives of the Code is to protect and support the family as a crucial environment for Children’s upbringing and well-being.

One of the aims of the first chapter of the Code is:

“Protecting and supporting the family as a core of society as a whole, and particularly as an environment for the upbringing and welfare of children.”

In addition, according to the Code, the family is defined as “the fundamental group of society and the natural environment of upbringing, well-being and protection of a child…”

Article 28 of the Code provides support programs for families, and in case of necessity, the State considers the material and non-material assistance of the family and granting access to social services for the family.

Ultra-nationalist groups, political forces and the pro-Kremlin media are reporting a variety of disinformation about the Code.

Please, see below the previous works on disinformation regarding the Code on the Rights of the Child prepared by Myth Detector:

5 Myths about the Code on Rights of the Child