Misinformation: George Soros has been designated as persona non grata in Austria 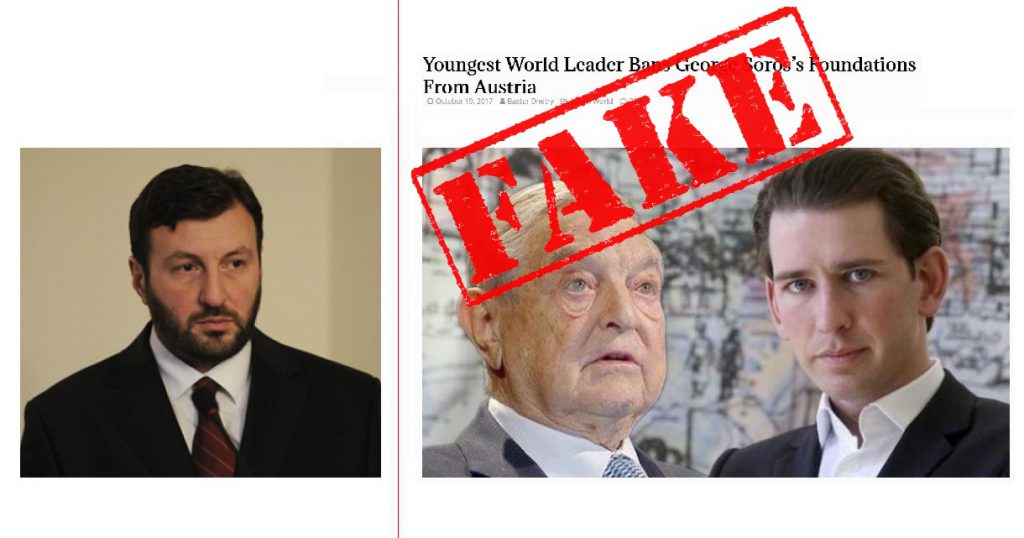 On November 25, 2017, in an interview for the television program “Ganskhvavebuli Aqtsentebi” (The Other Accents) on Rustavi 2, Giorgi Andriadze, chairman of the supervisory board for the St. Andrew the First-Called Georgian University of the Patriarchate of Georgia, stated that George Soros has been declared persona non grata in Austria.

The aforementioned statement is disinformation and does not correspond to reality. The first-hand source of fictional news as if George Soros has been denied working environment in Austria is yournewswire.com

According to Yournewswire.com, Sebastian Kurz gave the Foundation a 28-day deadline to cease operations in Austria, after the expiration of which, a legal case would be initiated for “attempts to weaken the democracy of the nation” against the foundation. The article also highlights that Sebastian Kurz called George Soros the greatest challenge facing mankind.

The article is totally fabricated and has no basis whatsoever in correlation with the truth. Fact#1: The current Federal Chancellor of Austria is Christian Kern. The formation of new government is still in process, therefore Sebastian Kurz is not able to issue an order to ban any organization.

Fact#2: Open Society Foundations has no representatives in Austria, hence Sebastian Kurz could not ban the operation of the non-existent office.

Fact#3: According to the American Politifact.com, there is not any searchable record of Sebastian Kurz making such statements or comments about George Soros and Open Society Foundations.

Russian media outlets also disseminated identical information to the one propagated by yournewswire.com.

Yournewswire.com mainly produces fake and fabricated news stories, along with conspiracy theories. The slogan of the website is “the news you want and the news other people won’t report”.

George Soros is often the subject of conspiracy theories. Follow the link to see the material prepared by “Myth Detector” on various fabrications around the persona of George Soros.