Merlino’s allegations from the U.S. The Buffalo Chronicle to “Georgia and the World” 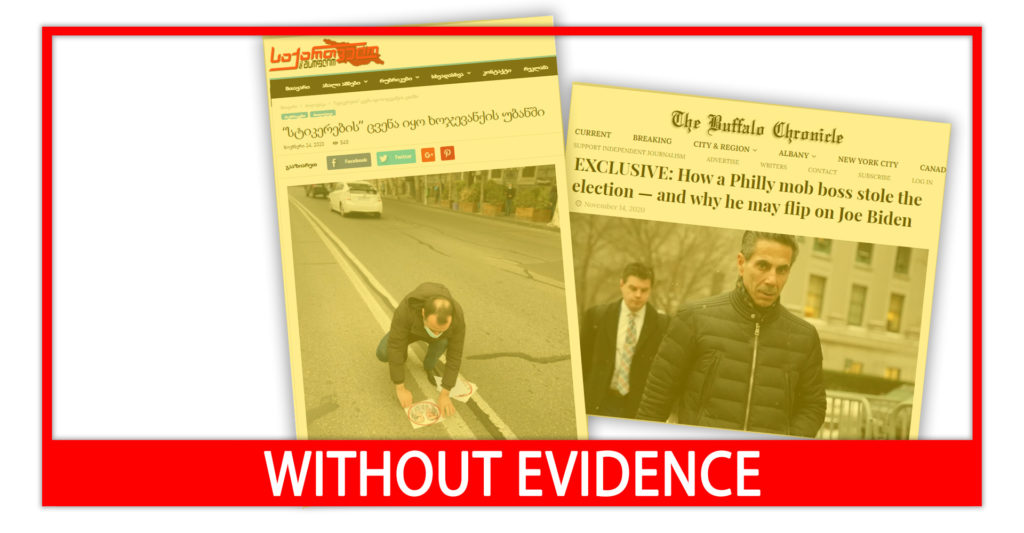 On November 24, the online media outlet “Georgia and the World” published an article  “There were Heaps of  Stickers in Khojivank District” by the Journalist Armaz Saneblidze. In the article, the author assesses the visit of U.S Secretary of State Mike Pompeo and the simultaneous protest rally of the opposition. Saneblidze mentions U.S. presidential election and writes that an “astounding scale” of election falsification was discovered.

The author of the article names an example of “head of the Philadelphia Mob” Joey Merlino producing 300 000 fake voting ballots in favor of Joe Biden and also mentions that Merlino admitted his part in a rigged election.

Georgia and the World: Head of the Philadelphia Mob admitted that he rented two houses in the suburbs of megapolis, where his subordinates produced 300 000 fake voting ballots in favor of Joe Biden and put it in the system.

Claim as if 300 000 fake voting ballots were produced in Philadephia lacks evidence. As for Joey Merlino’s “confession”, this information is disinformation because Merlino and his attorney deny the allegation of taking part in the scheme of fabricating the election.

Information about Joey Merlino fabricating the voting ballots in favor of Joe Biden was first published on ultraright conspirative outlet The Buffalo Chronicle’s webpage on November 14.

The Buffalo Chronicle published the article about Merlin with the following headline: “Exclusive: How a Philly Mob Boss stole the election – and why he may flip on Biden”. The article cites anonymous sources that claim that Joe Biden paid Merlino 3 million to fabricate 300 000 voting ballots. According to The Buffalo Chronicle, Merlino’s team was producing 6000 fake voting ballots an hour.

The article also states that Merlino may flip on Biden if Donald Trump is willing to issue a full expungement of his decades-long criminal record.

A statement as if Biden hired Joey Merlino and the mob to fabricate voting ballots lacks evidence. November 12 statement of U.S. Cybersecurity and Infrastructure Security Agency emphasizes the fact that the 2020 presidential election was the most secure nationwide election in American history. The statement also notes that there’s no evidence that votes were deleted, lost, changed, or compromised in any way.

On November 16, a member of Trump’s legal team, attorney Jordan Sekulow published the Buffalo Chronicle’s article on his Twitter account. 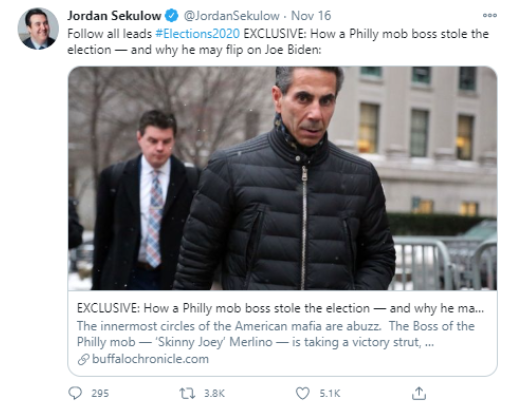 On November 17, Donald Trump supporter and hip-hop artist  Jeremy Herrell voiced the same allegation on Facebook live.  In his video, Herrel says that Joe Biden hired a mob to produce thousands of fake ballots. His Facebook post was marked as false information by PolitFact, Factcheck.org, and  Associated Press. 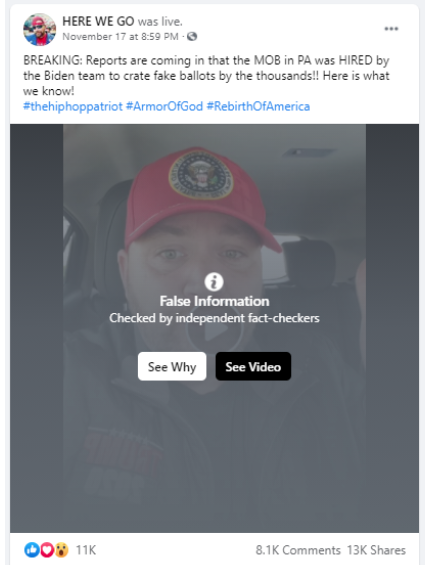 Compared to Americal sources, an article published on the “Geworld.ge” notes that Joey Merlino admitted that he fabricated 300 000 voting ballots in favor of Biden.  This claim is disinformation because Joey Merlino denied the allegations. His attorney John Meringolo spoke with New York Daily News and said that  Merlino categorically denies all the allegations

Claim as if Merlino admitted that he produced fake ballots can also be read in the November 18 article of Russian media outlet EurAsia Daily.

Joey Merlino, 58, has been on supervised release on a racketeering and conspiracy case in South Florida since 2018. During his last court hearing, Merlino stated that he “retired” from the mob.

Dissemination of the Geworld.ge article 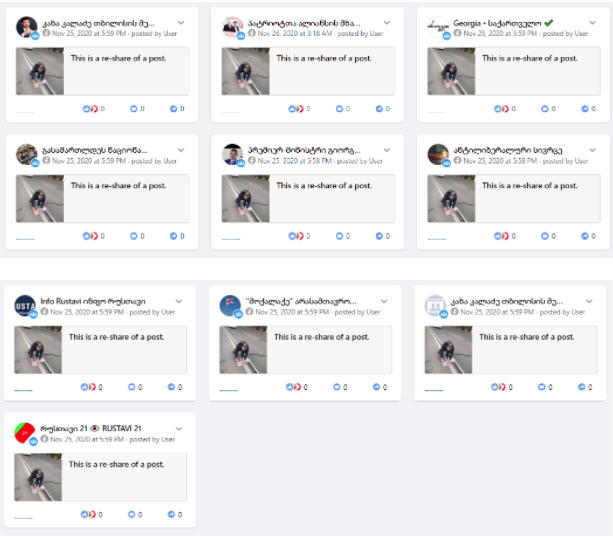