Masons or Communists? – What Threat did John Kennedy Speak About in 1961? 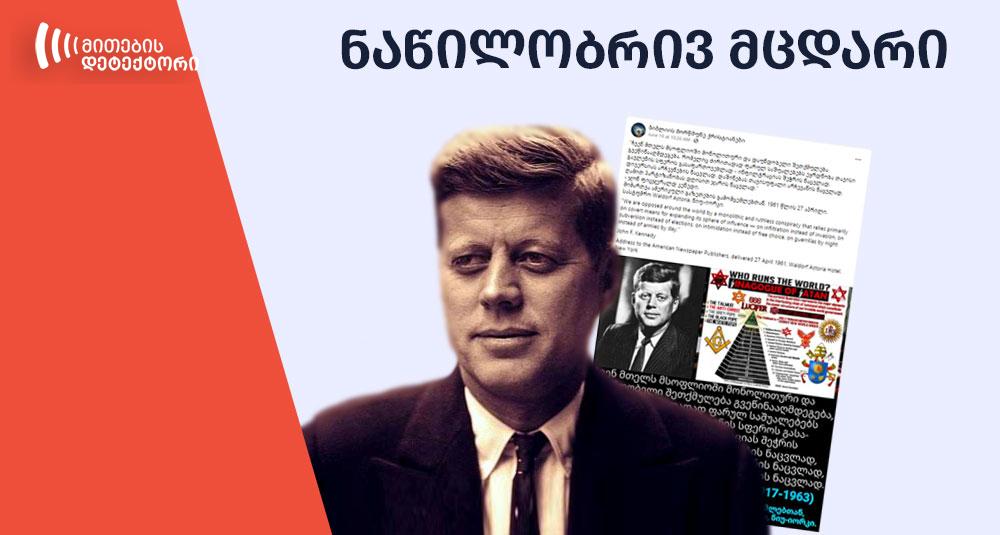 On June 19, 2021, the Facebook account “Bible Believing Christians” published a post with the photo of John Fitzgerald Kennedy, 35th president of the United States. The photo is given together with Kennedy’s following quote:

„For we are opposed around the world by a monolithic and ruthless conspiracy that relies primarily on covert means for expanding its sphere of influence–on infiltration instead of invasion, on subversion instead of elections, on intimidation instead of free choice, on guerrillas by night instead of armies by day.“

What’s more, the photo features a pyramid, which, per the author’s claim, depicts the structure of the “invisible government of the world” and includes well-known secret societies such as freemasonry and Illuminati, leaving an impression as if Kenney’s quote was about such type of organizations. 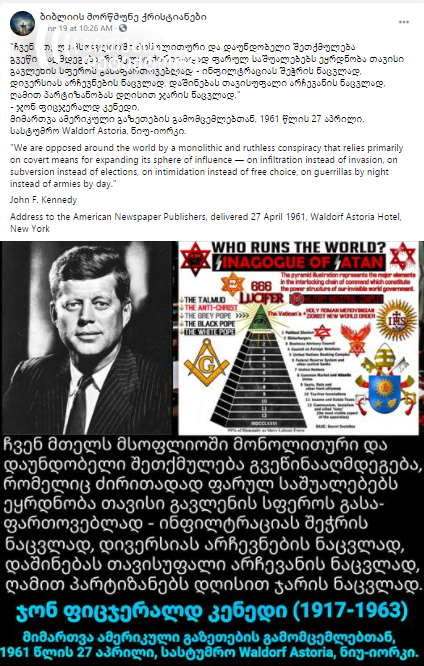 Post of the “Bible Believing Christians” is partly false. The aforesaid quote does belong to John Fitzgerald Kennedy, however, it’s taken out of context. Instead of “invisible government of the world” and secret societies, the U.S president spoke about the United State’s main adversary in Cold War – communists and the Soviet Union.

John Kennedy’s speech that includes the disseminated quote is called “The president and the press” and the full transcript is available at the official webpage of the John Kennedy Presidential Library and Museum.

On April 27, 1961, Kennedy met with “The American Newspaper Publishers Association” in New York and spoke about the freedom of the press and the protection of state secrecy. According to the president, many journalists are confused by the fact that no war has been declared to the U.S, and thus, they often disseminate such information that wouldn’t have been published in case of an armed conflict. President notes that in reality, America is in a state of war and allied countries face a great threat.

The fragment of the speech, disseminated by the Facebook account “Bible Believing Christians”, is about the U.S adversary Soviet Union’s use of unconventional warfare in the Cold War. At first glance, the fact that Kennedy does not openly mention the Soviet Union might be confusing, however, the next part of his speech clearly shows that the President is not talking about any secret organization, but the Kremlin:

“Its preparations are concealed, not published. Its mistakes are buried, not headlined. Its dissenters are silenced, not praised. No expenditure is questioned, no rumor is printed, no secret is revealed. It conducts the Cold War, in short, with a war-time discipline no democracy would ever hope or wish to match.”

Hence, Kennedy believes that one of the tactics that the Soviet Union used in the Cold War was to conceal information through totalitarianism and state censorship, making it difficult for adversaries to identify their intentions. He notes that freedom of the press is the core value of democratic society and since the U.S cannot impose such control over the media, he calls for publications to analyze their responsibilities and not print any future information that will provide important information to the enemies of the U.S.

Historical context should be taken into an account. Approximately a week before the meeting, the CIA’s planned “Bay of Pigs Invasion” was met with a complete failure. Landing operation aimed to overthrow the communist government of Fidel Castro in Cuba. Kennedy believed that the failure was partly caused by leaked information.

Conspiracy theorists often use fragments of this speech to prove as if Kennedy confronted secret organizations. The aforesaid quote can be found in an English book “The Big Lie, Exposed!” published in 2007, whose author provides an alternative analysis of the bible and the world history and believes that Kennedy confronted the Rothschild family and that’s why the president was killed by one of the secret societies two years later. Kennedy’s speech is a common topic of discussion in the Russian online space, where it’s also believed that the statement cost the president his life. In 2018, fragments of Kennedy’s speech was published on the Georgian Facebook page „შეხედე სამყაროს რეალურად“ (Look at the World Realistically), however, back then the author of the post claimed that the president made the statement, not in 1961, but 1963, 10 days before his murder. 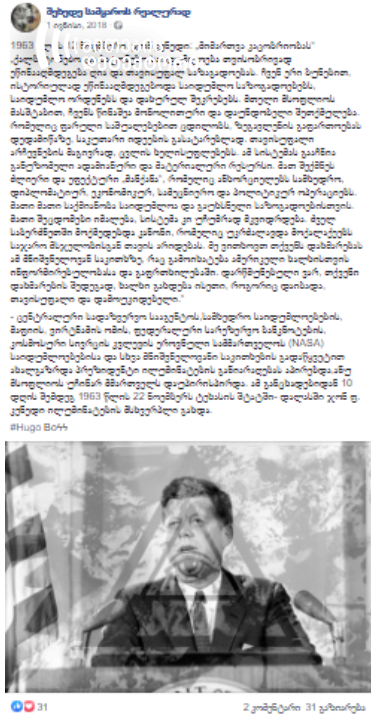 The Facebook account “Bible Believing Christians” also spread the disinformation on John Kennedy’s confrontation with secret society on March 29, 2021. Read more on this topic in the article prepared by “Myth Detector”: