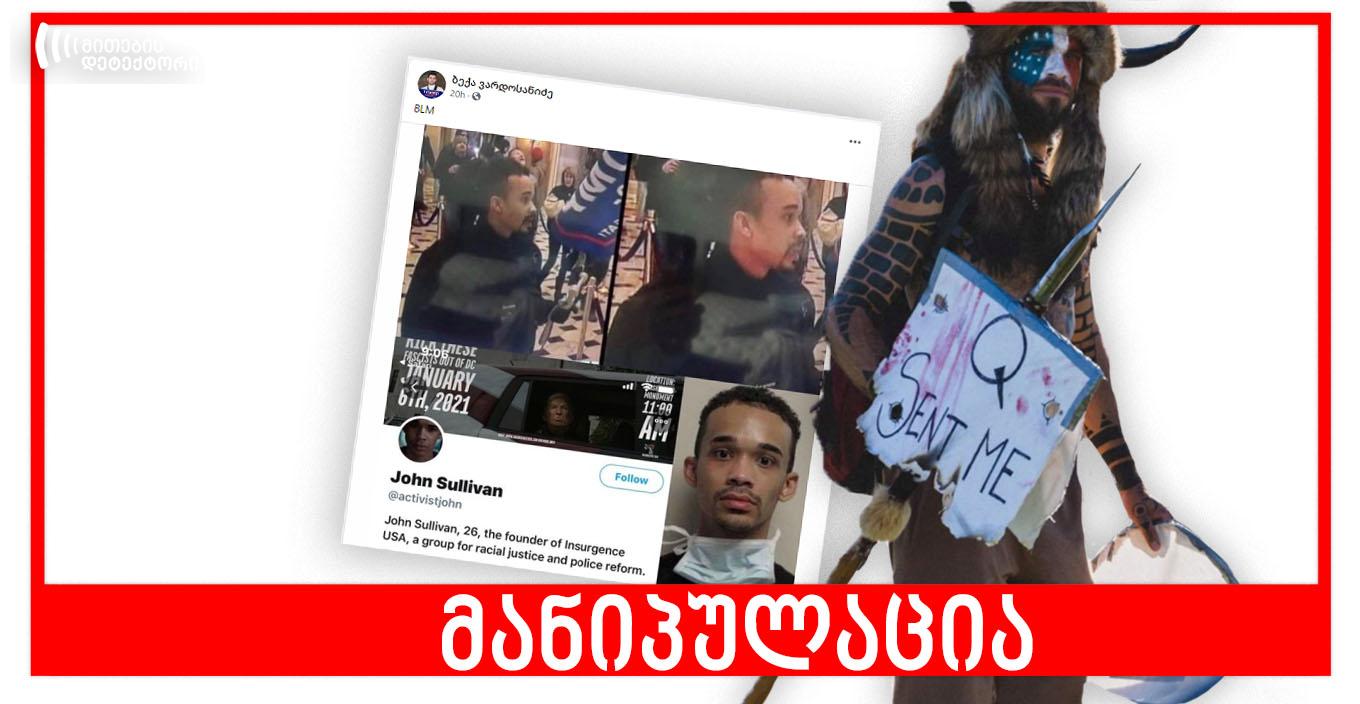 On 7 January 2021, a Facebook user, Beka Vardosanidze, shared a picture captioned “BLM,” showing several photos, including a Twitter page of John Sullivan, one of the protesters who stormed the Capitol building on 6 January. According to the Facebook post, Sullivan is linked to the movement Black Lives Matters (BLM) and consequently, is not a supporter of President Trump. On the same day, another Facebook user, Kakha Sikharulidze, posted a photo of people breaking into the Capitol and a message saying: “These fags are members of antifa and BLM.” 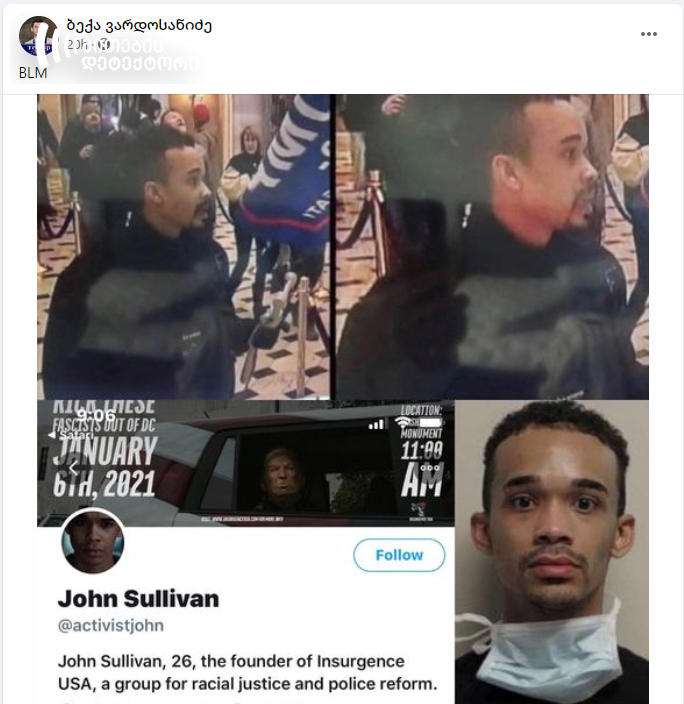 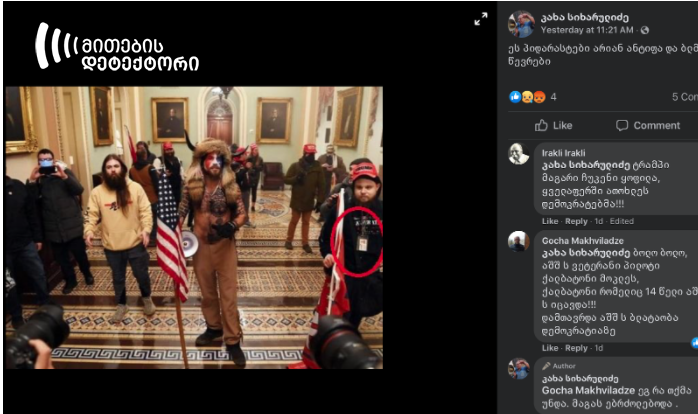 Beka Vardosanidze’s post is manipulative. John Sullivan is indeed a BLM movement advocate, not a Donald Trump supporter, but the post does not explain that Sullivan did not join the rioters but arrived at the scene to document ongoing events. In case of the photo published by Kakha Sikharulidze, people depicted in the picture are supporters of Donald Trump and are not linked to BLM and Antifa.

John Sullivan is the founder of Insurgence USA, the organization set up after the killing of Gorge Floyd to eradicate racial problems and end police brutality. Utah activist John Sullivan was indeed at the rally, but according to his comments, he was there to witness the events and collect facts and that he was sure that the rally would turn violent.

John Sullivan: “For me, it’s important from the group and the people around me to see that side of things, to see the truth.”

Sullivan said he knew from underground chats that the activists would storm into the Capitol and that was not a secret to anyone; hence, Sullivan went there to cover the events on behalf of his organization. A video showing how a female activist lost her life in the clash belongs to Sullivan. Sullivan claimed that he was the only person from BLM movement there whereas the rest were Donald Trump supporters from various groups.

Manipulations of this event circulated in Western media too. A number of posts on social media claimed that a person in a special costume (sporting horns, special costume and face paint) was a member of BLM and anti-fascist movement Antifa and participated in violent rallies held in the wake of George Floyd’s killing. A text accompanying the photo published by Kakha Sikharulidze contains a similar message. 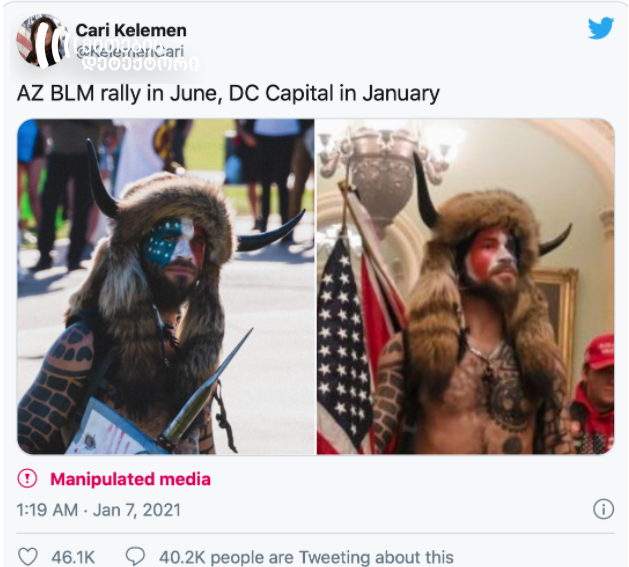 A badge of an individual marked with a red paint in the photo does not read either BLM or Antifa. It belongs to the organization Navistan Direct Marketing, where the protester worked. His accessories, a cap with an inscription Trump, a flag of Trump’s supporter (“Trump is my president”), and attire all speak for the support to Trump. It is worth noting that the organization dismissed this person from the job for dangerous conduct and issued a special statement to this effect. 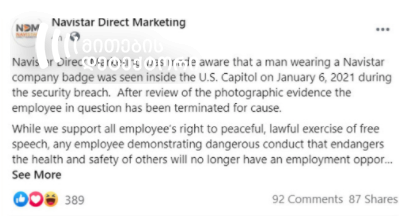 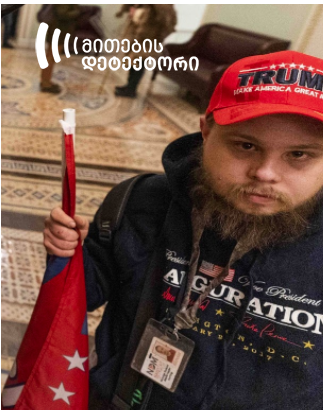 A photo clearly shows the badge of the participant in the rally (organization NDM)
Photo by: Manuel Balce Cenata/AP

The same photo depicting a person wearing a special costume is Jake Angeli, a participant in mass rallies after the death of George Floyd, however, the sign he carried reads: “Q sent me.” Q stands for QAnon, a far-right conspiracy theory group that supports President Donald Trump.

It is worth to note that posts shared on social network featured a cropped photo of Jake Angeli, where his sign that read “Q sent me” was cut out. Seeing this cropped image viewers got an impression that he was a BLM member who joined their protest rallies. 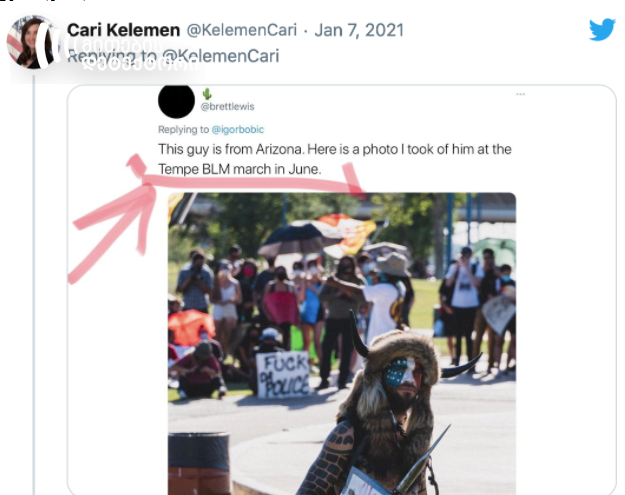 A cropped photo shared by a Trump supporter, where the text on the sign is cut out. 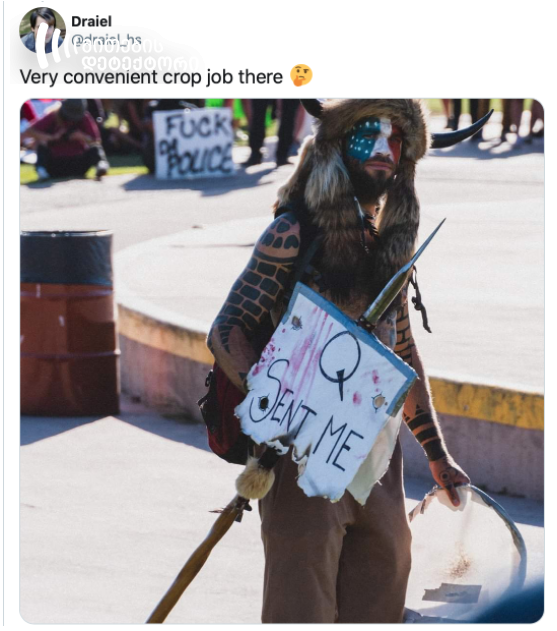 The uncropped version of the same photo.