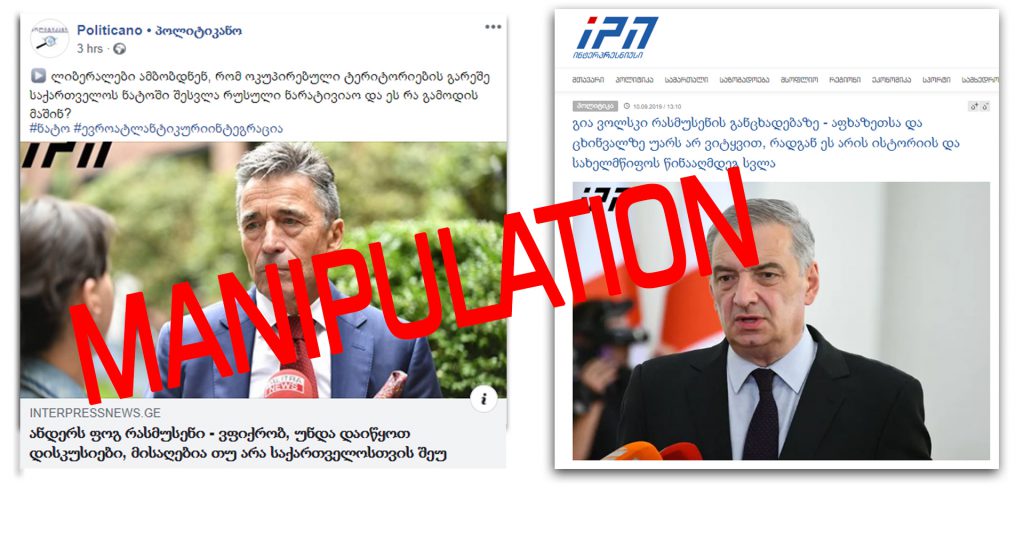 On September 10, an online news agency Interpressnews released an article headlined “Anders Fogh Rasmussen: Georgia should start discussion of whether it would be acceptable to join NATO without Abkhazia and “South Ossetia.”” The article contains extracts from Rasmussen’s interview, where he speaks about NATO-Georgia relations and future membership.

Later, Interpressnews amended the headline, as it was misleading and contradicted the content and context of the article. The article released by Interpressnews was reposted by Facebook page Politicano • პოლიტიკანო, which misinterpreted the issue and linked it to liberals. Rasmussen’s remarks were followed by manipulative assessments from Georgian Dream MP, Gia Volski. 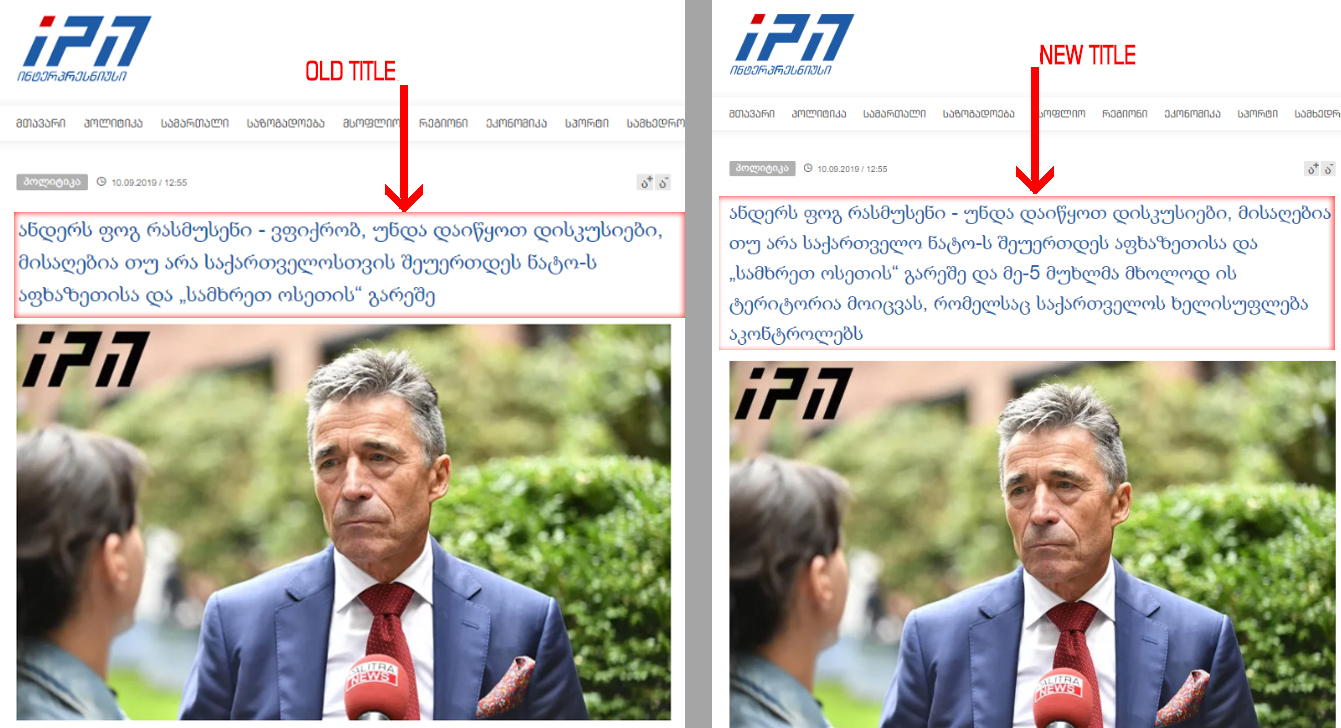 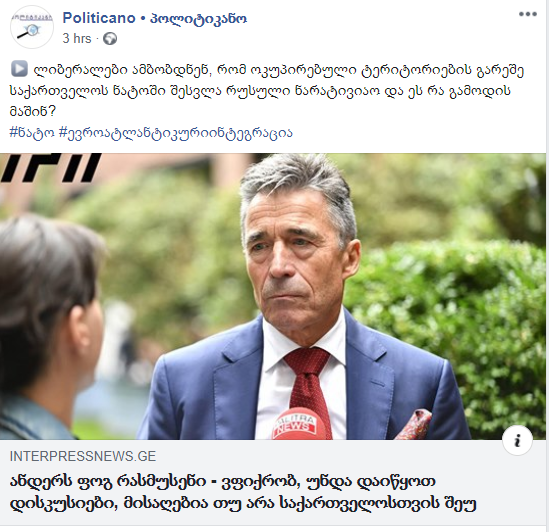 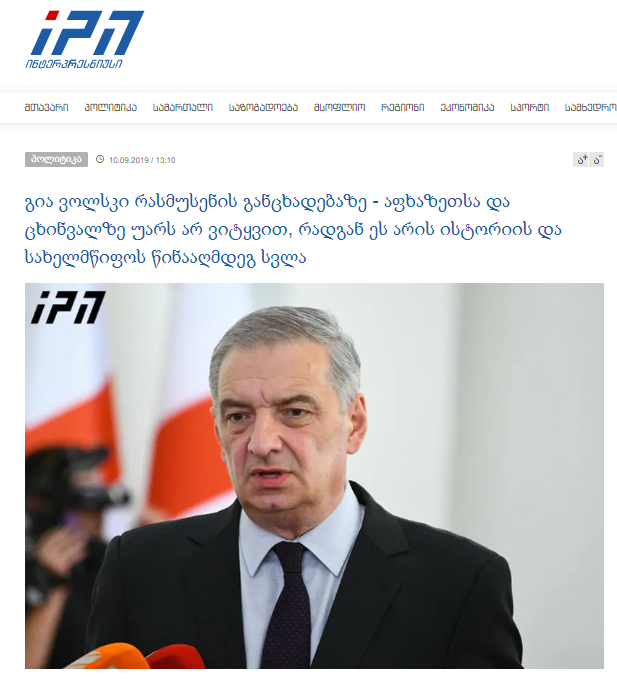 Manipulative interpretation of the issue forms an impression as if Georgia should give up its occupied regions in exchange for joining NATO. In fact, the former NATO Secretary General said that in case of Georgia’s accession to the alliance, it should be discussed internally whether Article 5 covers only the territory that is actually controlled by the Georgian government and applies to the occupied territories only after Georgia restores its jurisdiction there. As an illustration, Rasmussen brought an example of Germany, saying that West Germany joined NATO in 1955, while East Germany became a member of the alliance only in 1990, following German reunification.

Speaking at the 5th Tbilisi International Conference co-organized by McCain Institute and Economic Police Research Center, former NATO Secretary General, Anders Fogh Rasmussen said that Georgia has achieved an important progress in military sector, adding that the country needs to broaden the reform scope in terms of strengthening the fight against corruption and guaranteeing the rule of law.

“If one day we consider Georgia ready to join the alliance, we also have to make sure that Article 5 is still credible, which would require NATO to actually help Georgia, if Georgia is attacked. But obviously, it is the problem to have unresolved border disputes with Russia in Abkhazia and South Ossetia. So, the question is how could that be resolved. I think you have to discuss internally in Georgia would you in that case be willing to accept, that Article 5 will only cover the territory that is actually controlled by the Georgian government. And the NATO will also have to reflect on exactly the same question,” Rasmussen said.

The former NATO Secretary General also spoke about Germany’s precedent, saying that West Germany entered NATO in 1995, but the NATO rules did not apply to East Germany. “But when Germany was reunified in 1991, NATO rules then also covered East Germany,” he said. Rasmussen noted that the same arrangement could be elaborated for Georgia, but this issue should be discussed by both Georgia and NATO.

Commenting on Rasmussen’s remarks, Georgian Dream lawmaker, Gia Volski slammed the former NATO Secretary General’s opinion as disputable. He linked the issue of excluding the Russian-occupied Tskhinvali Region and Abkhazia from the Article 5 protection to the problem of territorial integrity.

Volski explained that “Georgia should join any international organization with its internationally recognized territories and borders.” He also noted that “neither we, nor any political force can or will give up these territories, because it will be a step against our history and the state that will never work.”

What does Article 5 imply?

According to Article 5 of the North Atlantic Treaty, the Parties agree that an armed attack against one or more of them in Europe or North America shall be considered an attack against them all and consequently they agree that, if such an armed attack occurs, each of them, in exercise of the right of individual or collective self-defence. Article 5 does not determine territorial borders of member states.

Speculations about the West allegedly offering Georgia to give up its territories in exchange for NATO membership emerged after Luke Coffey, political analyst at the Heritage Foundation released a report “NATO Membership for Georgia: In U.S. and European Interest.” His opinions about Georgia’s accelerated accession to NATO were misinterpreted by pro-Kremlin media outlets and pro-Russian actors. In particular, Luke Coffey, the author of the report, explained that his proposal offers to temporarily exclude the Russian-occupied Tskhinvali region and Abkhazia from the Article 5 protection, until Georgia restores its territorial integrity within its internationally recognized borders.

Other publications released by the Myth Detector on the same topic are provided below: