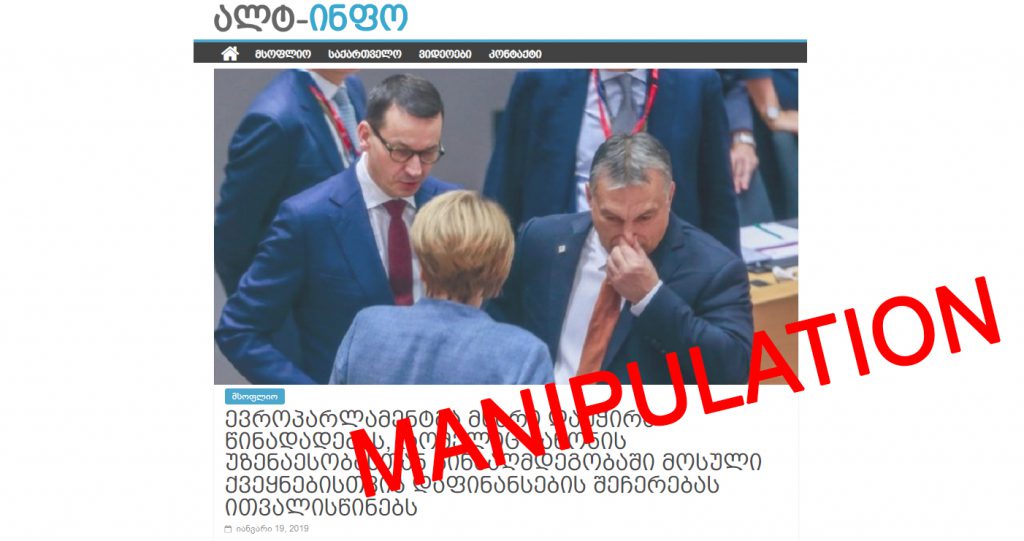 On January 19, 2019 Alt-Info published an article titled “The European Parliament has Supported a Proposal that Envisages Suspension of Funding for the Countries that Contradict the Rule of Law.” According to Alt-Info, the list of the countries includes Hungary and Poland, as they oppose the liberal immigration policy of the EU. The article by Alt-info has been published based on an online edition Politico.eu.

This attempt by Alt-info to link the initiative supported by the European Parliament with an immigration policy is manipulative, since the document envisages the termination of financing for those EU member countries which do not obey the rule of law. Disobeying the rule of law, along with other issues, includes the absence of an independent court and failure to investigate corruption crimes. Politico.eu, which Alt-Info uses as their source for these claims, links the European Parliament’s initiative with Poland and Hungary, as the rule of law in these countries is weakened.

On January 18, 2019 the European Parliament supported the creation of a new regulation, which is directed against the weakening of the rule of law in the EU member states.

According to the document, state financing may be suspended if one of these is undermined:

Politico.eu, used as the source by Alt-Info, linked the EU financing initiative to Poland, Hungary and other post-Soviet states as well, however in its May 1, 2018 article, Politico.eu cited the weakened judicial system in Poland and the actions taken against non-governmental organizations and media in Hungary as the main reasons

Politico.eu: ”Although Commission President Jean-Claude Juncker insisted the plan does not target any particular country, it was clearly designed to send a strong signal to Poland — which has clashed with Brussels over moves that gave the government more control over the judiciary — and Hungary, where Prime Minister Viktor Orbán stands accused of cracking down on independent institutions such as NGOs and the media.”