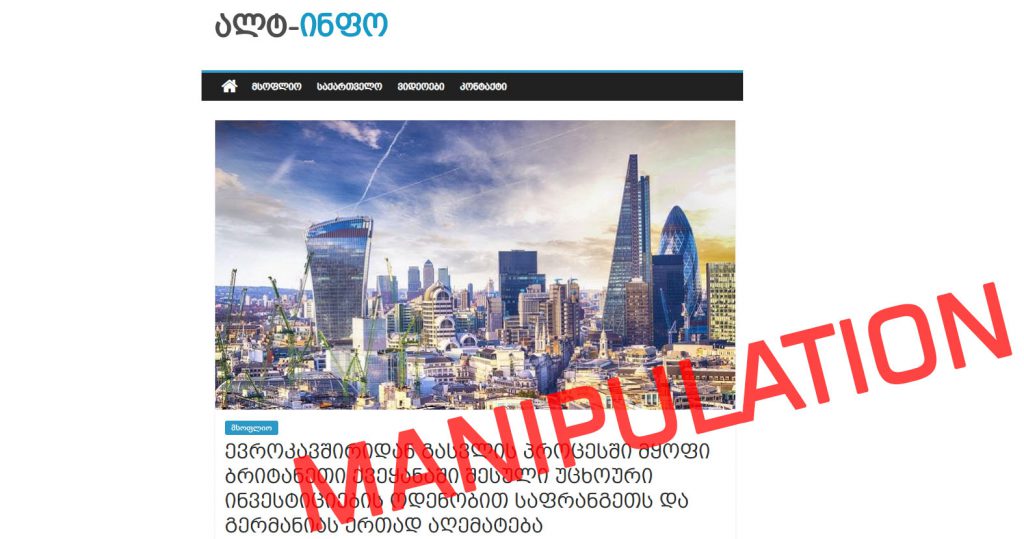 On February 11, 2019, an ultra-nationalist online edition “Alt-info” published information concerning the amount of foreign direct investments in Great Britain after Brexit. According to “Alt-info”, more foreign direct investment went to Britain in 2015-2018 than in Germany and France combined, which the publication links to the Brexit process. “Alt-info”, on the other hand, mentions as a source English publication “Westmonster”. “Westmonster”, for its part, bases on the report of world auditing and consulting company Deloitte, which reviews investments in Britain and the influence of Brexit on them. Information published by “Alt-info” has been shared in social networks by pages, such as “Anti-liberal club”, “Anti-liberal page”, “Georgia for Georgians”, etc.

The article published by “Alt-info” is a manipulation, as it provides a reader with information selectively, based on its interests. The report, which “Alt-info” and its primary source base on, claims the opposite: that Brexit slightly, but still reduced the amount foreign direct investments in Britain. In addition, London for years (2009-2018) remains its status of leader city in the world in terms of foreign direct investment and this process is not linked to Brexit.

What is written in a report, which Alt-info and its source Westmonster rely on?

The report of the World auditing company “ Deloitte ” reviews statistics of the investments undertaken in Great Britain over the past ten years and the role of Brexit.

a. In terms of foreign direct investments, London was a leading city even before Brexit

The report shows that London ranked first in the world in terms of the amount of foreign direct investments from January 2009 through August 2018. The referendum on leaving the EU was held in Britain in 2016. It means that a large number of foreign investment in Britain is not linked to the Brexit process. 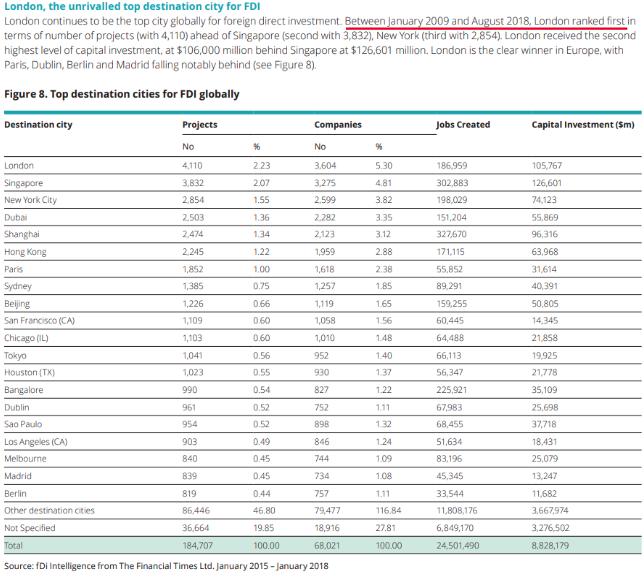 In Deloitte’s report, it is also noted that Brexit process damaged certain companies, especially those foreign companies, whose business complied with the EU Single Market regulations. One of the examples is automobile production. If investment in that sector was 2.5 billion pounds in 2015, this number was cut in half in 2017.

As also noted in the report, until a clear picture of Brexit process has emerged, investors will refrain from making a long-term investment decisions. “Deloitte” does not consider the indicator of investment reduction after Brexit alarming, noting, however, that 1,374 projects of foreign investments in Britain was announced in 2015, whereas there were 1,170 projects in 2017, which corresponds to 16% decrease. In addition, as a result of foreign investments, 95,992 jobs were created in Britain in 2015, while in 2017 – 79,704.

Research of the “Centre for Economic Performance” of London School of Economics also analyses the Brexit and investments, noting that EU investments in Great Britain after Brexit reduced by 11%, which is about 3.5 billion pounds.

“Westmonster”, which “Alt-info” uses as a source, was founded by the main donor of Brexit Arron Banks in 2017. According to Guardian, “Westmonster” is a famous ultra-nationalist edition in the style of Breitbart and is created on the base of “Leave.EU”, the group founded by Banks. “Leave.EU” Facebook page has 800.000 likes, while its Twitter page has 115,000 subscribers. Co-owner and editor of “Westmonster” is former press officer to Nigel Farage (The former leader of “UK Independence party”) Michael Heaver.