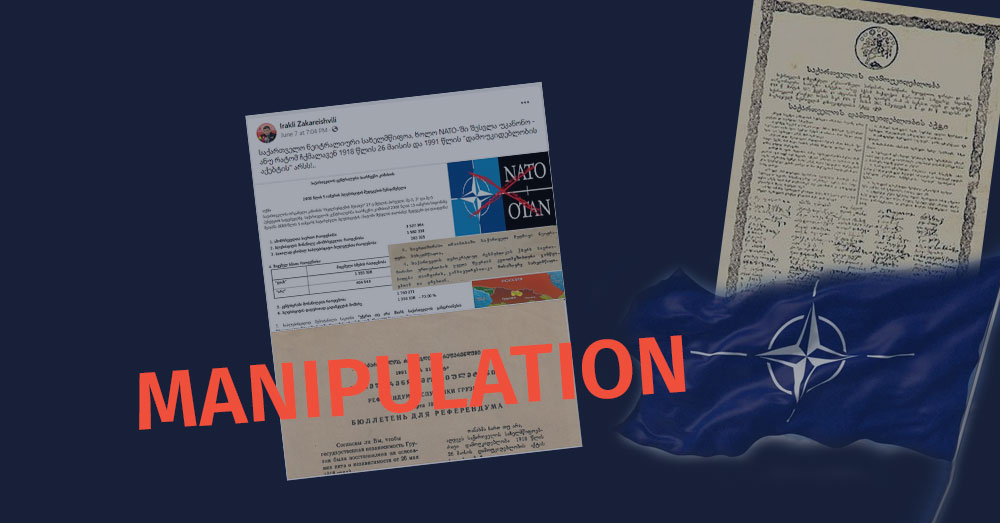 On June 7th, lawyer Irakli Zakareishvili published a post on his Facebook page, stating that the restoration of the Georgian independence in 1991 was carried out on the basis of the Independence Act of May 26th, 1918, the sixth paragraph of which states that Georgia is a neutral state, hence, integration into international military blocs, specifically NATO country is illegal. 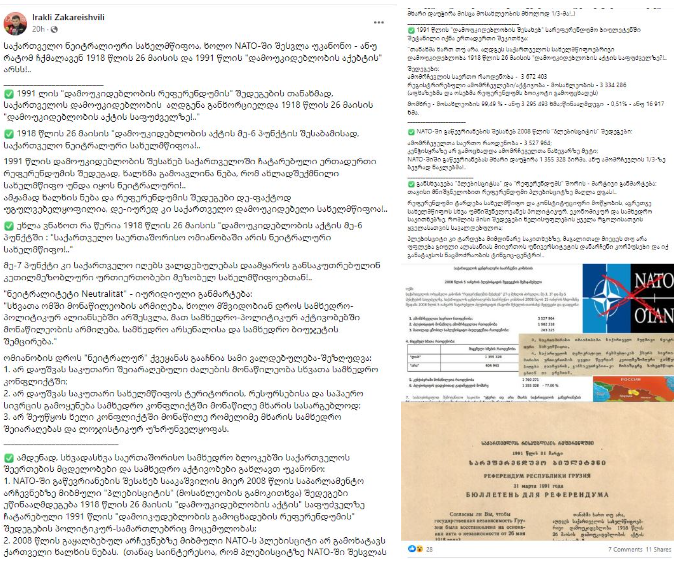 The claim that Georgia’s membership in NATO is illegal due to the record of neutrality in the 1918 Act of Independence is manipulative. The Act of Independence entailed the refusal to engage in military actions during conflicts. The record on neutrality cannot be found in either the 1921 or 1995 constitutions. Notably, the agreement on neutrality signed between Georgia and Russia in 1920 was violated by Soviet Russia during the occupation of Georgia. It should also be noted that in 1993, before the start of the NATO integration process, Georgia was a member of the CSTO, and until 2007, Russian military bases were located on its territory.

The third paragraph of the Act of Independence, adopted on May 26th, 1918, reads as follows:

“Georgia is a permanently neutral state in international warfare.”

The third paragraph of the first amendment of the act reads:

“Georgia is neutral during international conflicts.”

Noteworthy that the Constitution adopted by the Cons Assembly on February 21st, 1921, no longer mentions neutrality. At the time of the adoption of the Constitution, conflict was taking place between the Georgian Armed Forces and the Russian Army on the outskirts of Tbilisi.

Before invading Georgia, Soviet Russia recognized Georgia’s independence. On May 7th, 1920, Grigol Uratadze, a member of the Constituent Assembly, signed a peace treaty between Russia and Georgia, in which the parties pledged to “maintain strict neutrality”, although this did not prevent the Soviet government from occupying the country.

a) provide for Georgia’s accession to an international organisation or interstate union;

b) are of a military nature;

Notably, Georgia made an official application for membership in the North Atlantic Alliance in 2002. Prior to that, in 1993, Georgia became a member of the Collective Security Treaty Organization (CSTO), an intergovernmental military alliance. Georgia left the organization in 1999 after a five-year contract expired and refused to renew it.

In the next part of the Facebook post, Irakli Zakareishvili manipulates the fact that 77% of the voters, 1,2005,328 people, supported NATO membership in the 2008 plebiscite. Out of 3,527,964 registered voters, 1,982,318 took part in the plebiscite, although 203,325 ballot papers were declared invalid. Based on this, Zakareishvili asserts that less than one-third of the population supports NATO membership. It is important to note that Georgia conducts annual opinion polls on the position of the population on NATO and EU membership. A similar poll was conducted in March 2022 by the International Republican Institute (IRI) and the National Democratic Institute (NDI). 60% of respondents by IRI and 71% of respondents by NDI support Georgia’s NATO membership.

The NDI survey is based on a representative telephone survey with a margin of error of +/- 1.8%, an IRI survey conducted through face-to-face interviews and the margin of error, in this case, is +/- 2.5%.

In parallel, the pro-Russian ‘Alliance of Patriots’ and its affiliated TV station Obieqtivi have been consistently claiming that the majority of the Georgian population is in favour of neutrality, which was supported by a public opinion poll broadcast by Obieqtivi, in which only pro-neutrality parties were represented. For more on this topic, see the “Myth Detector” material: