Manipulation and an Attempt to Incite Hatred, as if a Church under Conturction was Demolished in Pankisi 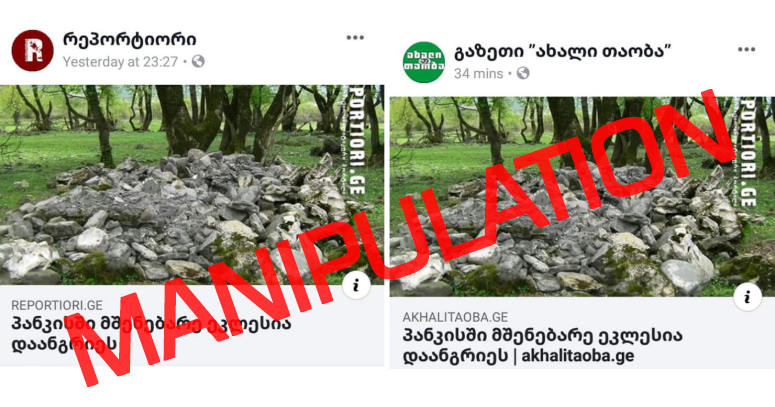 On 21 April, after a clash between the Special Task Force and local residents in Pankisi Gorge, trolls and newly created pages became active in social networks by attempting to discredit the Kists and to incite hatred on ethnic and religious grounds. Simultaneously, on April 22, news agencies “Reportiori” and “Akhali Taoba” published identical news on their Facebook pages titled “ A Church under Construction was Demolished in Pankisi”. The information was shared by other Facebook users with aggressive assesements. As of now, the posts shared by “Reportiori” and “Akhali Taoba” are no longer available.

Information about the demolition of a church under construction in Pankisi Gorge was disseminated in April 2017. Reviving a story from 2 years ago in the context of today’s Pankisi events of April 21, 2019, is aimed at inciting religious intolerance and hatred.

The story is about a temple in Jokolo village, which a local villager had started to repair at his own initiative.The news about the demolition of repair works was covered by Pankisi Community Radio on April 22, 2017. The demolition of the temple was followed by a protest rally in Akhmeta.

The incident was addressed in official statements issued by “Pankisi Council of Elders” and the Imam of the Salafi community  Bekkhan Phareulidze. Both statements underlined that the incident had been generalized to the whole Gorge. The statement of “Pankisi Council of Elders” indicated that the aim of this generalization was to declare the Kists  “enemies to the Georgian people”.

Bekkhan Phareulidze: “All provocators should quit insulting the whole population, let’s wait for the investigation, don’t blame us for something we would not commit under any circumstances.”

“Pankisi Council of Elders”: “[the incident]” was followed by the excitement, that spread all over the social network, caused a huge disinformation, negatively affected people’s emotions, that resulted in numerous phone calls demanding the truth. We, the elders of Pankisi gathered due to this fact and expressed our position, that any religious or cult building is inviolable and it has remained this way for centuries. We the residents of Jokolo and Pankisi are the ones who are concerned with what happened in the first place, because we celebrated holly days at this place. At the same time we understand that there are people who want to inflate the story hugely and want to tarr all the Kists of the Gorge with one brush, to declare us enemies of Georgia and the Georgian People”.