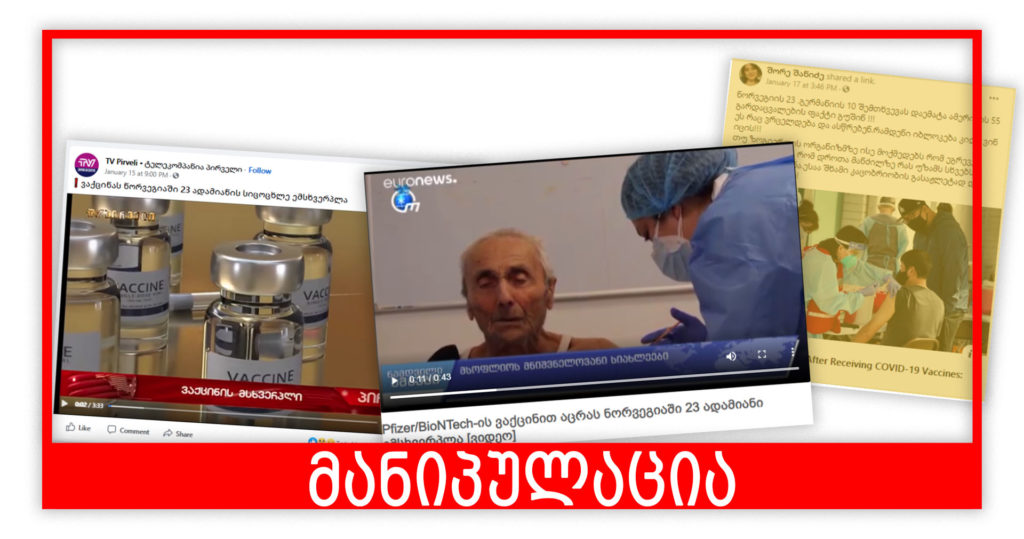 On January 17, Facebook user Shore Shanidze published a post in a public group “Anti-COVID-Fascism Movement,” where she talks about COVID-19 vaccine deaths in Germany, the United States and Norway. According to the post, 23 and 55 deaths were reported in Norway and the United States, respectively. Shore Shanidze claims that COVID-19 vaccine is a poison that is used to annihilate and enslave the humankind.

Several media outlets directly linked the reception of Pfizer’s COVID-19 vaccine to the deaths. On January 15, TV Pirveli • ტელეკომპანია პირველი published a video on its Facebook page with a caption: “The COVID-19 vaccine left 23 people dead in Norway.” The news with the same headline was published on Obieqtivi TV’s website a day later, on January 16. A logo of Euronews is also seen in Obieqtivi TV’s story; however, no such story can be searched on Euronews itself.

The video aired by TV Pirveli initially says that the vaccine left 23 people dead, but then it notes that experts are still clarifying the causes of death. The story provides comments by Amiran Gamkrelidze, Head of the National Center for Disease Control and Public Health, who says that the fact has yet to be studied and nobody has said that those people died after being vaccinated. As for Obieqtivi TV, it also noted at the beginning of its story that 23 people died after getting the COVID-19 vaccine. Then, the TV channel notes that the death was caused by underlying medical conditions that increased the risk for adverse reaction.

Online media outlets info9.ge and newposts.ge also link the deaths of 23 people in Norway to the coronavirus vaccine. According to them, the Norwegian Medicines Agency attributed deaths of 13 people to side effects caused by the COVID-19 vaccine. By the moment of publishing these materials, medical examination to clarify the cause of deaths had yet to be completed and only assumptions were made in this respect. 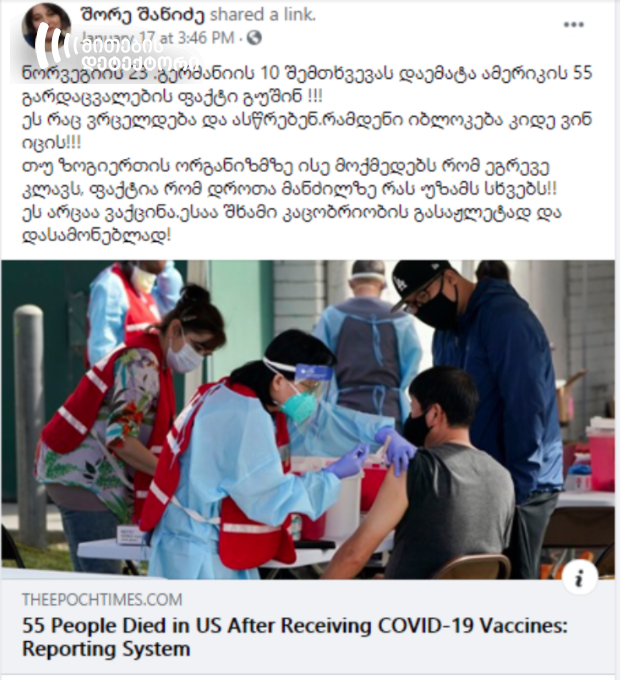 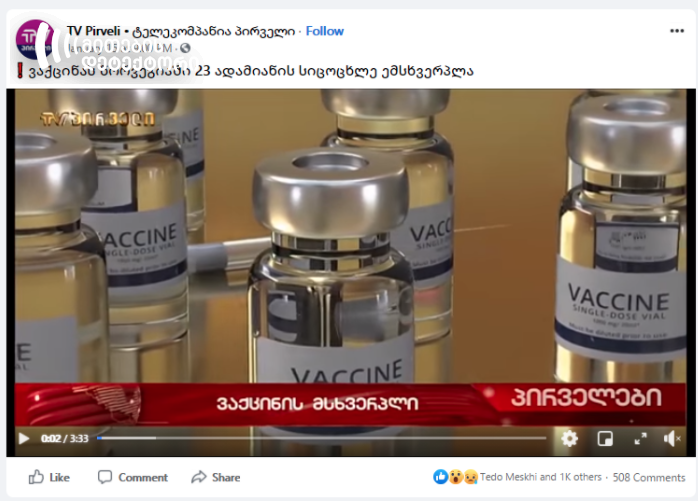 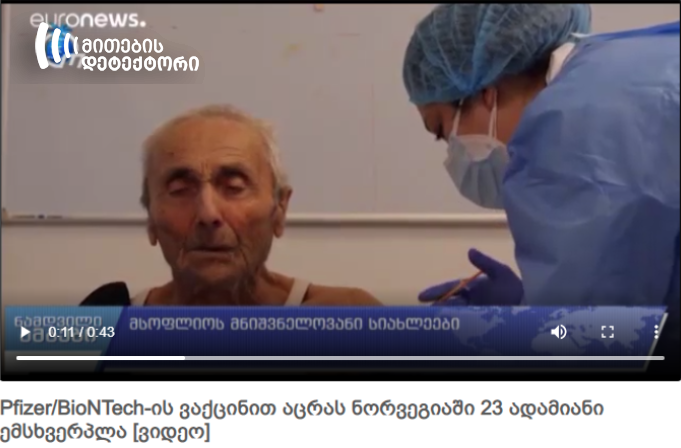 The information about the deaths caused by vaccination in Norway is manipulative, because according to the statements made by the Norwegian Medicines Agency and healthcare professionals, there is no clear evidence to prove the link between the deaths of vaccinated elderly people and the vaccination. Another allegation voiced by Shore Shanidze about 55 deaths in the U.S. is also manipulative because it refers to Vaccine Adverse Event Reporting System (VAERS) that is a passive reporting system, meaning it relies on individuals to send in reports of their experiences that need further evaluation.

What do we know about deaths in Norway?

According to the Norwegian fact-checking organization faktisk.no, 23 people died in Norway (updated number – 33 deaths) because of the COVID-19 vaccine. Still 13 deaths have been assessed by the Norwegian Institute of Public Health (NIPH) and Norwegian Medicines Agency.

The Norwegian Medicines Agency notes that there is no causal connection between the vaccine and the 13 deaths.

The Norwegian Medicines Agency admits that common adverse reactions to vaccines, such as fever and nausea, may have contributed to a fatal outcome in some frail patients. It is noteworthy that mainly elderly people died with serious underlying conditions. Each week, an average of 300-400 people dies in Norwegian nursing homes. The 13 deaths occurred in nursing homes. All of them were above 80 years of age, and some of them were above 90. They had serious underlying conditions and “severe frailty.”

Clarifying the news about 23 deaths in Norway, Bloomberg reported on January 18 that health authorities in Norway sought to allay safety concerns raised by the death of some elderly patients after they were vaccinated against COVID-19. It also noted that according to the Norwegian Medicines Agency’s latest figures, all were already seriously ill.

Norway has already inoculated about 48,000 people. Mainly high-risk people, including elderly individuals were vaccinated. Steinar Madsen, the Norwegian agency’s medical director, said that almost all of Norway’s nursing home population has been vaccinated and the reported fatalities are “well under 1 out of 1,000 nursing-home patients.”

Madsen said he isn’t expecting a different outcome with another vaccine, from Moderna Inc., which uses messenger RNA technology that “teaches” the body’s cells to fight off infection.

Is any link between 55 deaths in the U.S. and the COVID-19 vaccine confirmed?

The material shared by Shore Shanidze also involves information about the death of 55 people in the U.S. after receiving COVID-19 vaccines. Vaccine Adverse Event Reporting System (VAERS) is referred to as the source of information, according to which deaths were caused by both Moderna and Pfizer-BioNTech vaccines. The same material notes that anyone can submit a report to VAERS, including healthcare providers, patients or family members.

VAERS is a national early warning system to detect possible safety problems in U.S.-licensed vaccines and anyone can report an adverse event to it. While VAERS serves as an early warning system for potential problems with vaccines, determining whether there is a causal link requires further investigation into these reports.

The term “adverse event” describes any health problem that occurs in a person after they received a vaccine, regardless of whether the event was caused by a vaccine. For example, deaths by road traffic accidents are also listed in VAERS as adverse events, but are obviously not caused by the vaccine. In fact, VAERS even accepts reports about someone who turns into the Hulk, a Marvel Comics character, after vaccination.

Citing VAERS reports as evidence that vaccines are harmful is a common feature of vaccine misinformation, writes Health Feedback that previously reviewed claims that were based on VAERS reports and found them to be inaccurate or unsupported.