Khomeriki: The Occupation of Georgia is Georgia’s Own Fault, Russia Will Protect Us from the Treaty of Kars 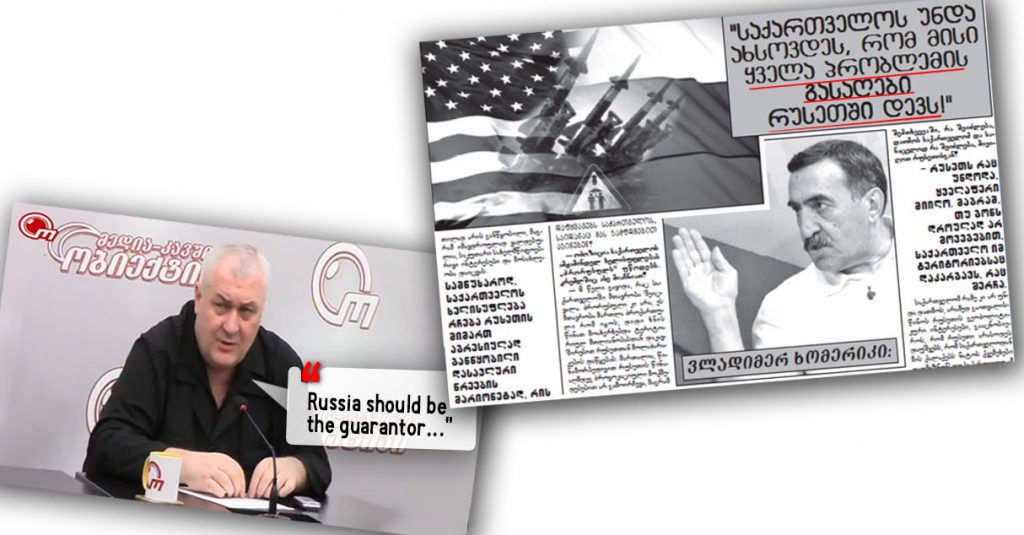 In a July 13-19 issue of Asaval-Dasavali, Vladimer Khomeriki, the Director of the Foundation for the Unity of Russian and Georgian People, stated that the Treaty of Kars expires in 2021 and that only Russia can protect Georgia from the Turkish aggression. He also added that the occupation of Georgian territories by Russia is Georgia’s own fault, as it has demonstrated “aggressive” attitude towards Russian and is a “puppet” of the West. According to Khomeriki, the Government of Russia has good intentions towards the Georgian people and is simply “forced” to occupy the Georgian territories due to its geopolitical interests.

In his interview with Asaval-Dasavali, Khomeriki disregards Russia’s responsibility in the occupation of the Georgian territories and shifts the spotlight from the threats coming from the Kremlin to those coming from Turkey. To this end, he reiterates the old conspiracy about the Treaty of Kars allegedly expiring in 2021, resulting in Russia not being the guarantor of Georgia’s territorial integrity and Turkey receiving Adjara back. The Treaty of Kars does not have a clause that would support this conspiracy about the expiration date of the Treaty.

Real facts: The Treaty of Kars is permanent and is not bound by a specific term.

The Treaty, the original version of which is available online, does not include any clauses that would create a legal ground for its expiration in 2021. Moreover, the Agreement on Friendship, Cooperation, and Good-Neighborly Relations between Georgia and Turkey from March 25, 1993 notes that the parties would “uphold the agreements signed between them since the Treaty of Kars from October 13, 1921”.

Who considers Russia to be the “guarantor of peace” in Georgia?

On July 10, Davit Tarkhan-Mouravi, one of the leaders of the Alliance of Patriots of Georgia, like Khomeriki, stated in a TV program by Obiektivi, that Russia should be the “guarantor of peace” in Georgia and that “we should do so that Russia also becomes the guarantor of the territorial integrity”.

Sources of the conspiracy around the Treaty of Kars

The disinformation about the Treaty of Kars has been disseminated for years by openly pro-Russian or the so-called nationalist groups, including the Alliance of Patriots of Georgia, which, by spreading the message – “if Russia is an occupant, then so is Turkey” – aims to shift the spotlight from the Russian threat to historical threats. Obiektivi, Asaval-Dasavali, and Saqinform spread the disinformation on the Treaty of Kars the most often. Jeffrey Silverman, one of the sources of the pro-Kremlin media when it comes to the Lugar Lab, has also disseminated the aforementioned conspiracy.

Vladimer Khomreiki is a businessman who has built up his capital in Russia. He is the President of the Foundation of the Unity of Russian and Georgian People.

Khomeriki believes that Russia has not occupied Abkhazia and the Tskhinvali region. He thinks that the actions of the Government of Georgia forced Russia to place the peacekeepers on the territory of Abkhazia and the Tskhinvali region, and that Russia is also occupied by Georgians, as more than 1 million Georgians live there. In a video, prepared by the occupational regime to smear the Lugar Lab, Khomeriki speaks as a “doctor of economic sciences”. Khomeriki appears twice in the video and develops conspiracy theories. 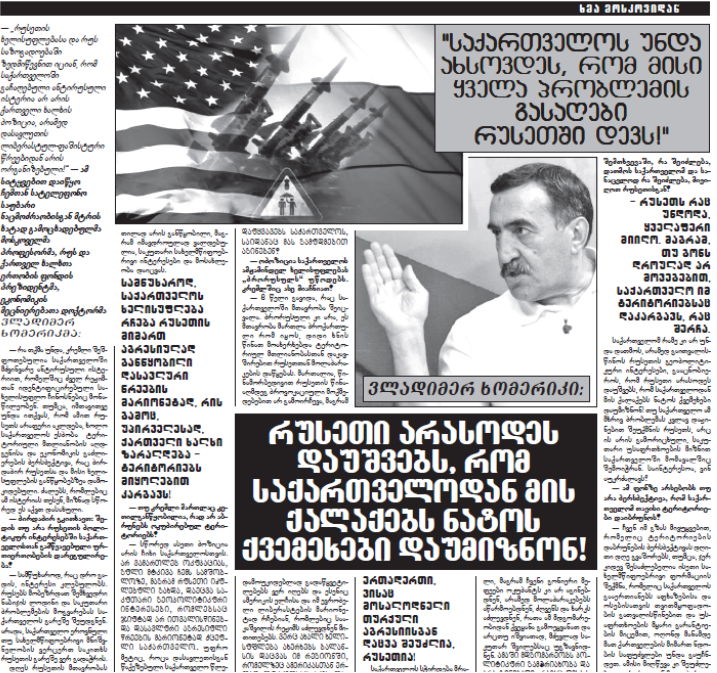