Julia Gaponyuk’s disinformation about luciferase, vaccination in Israel and chips 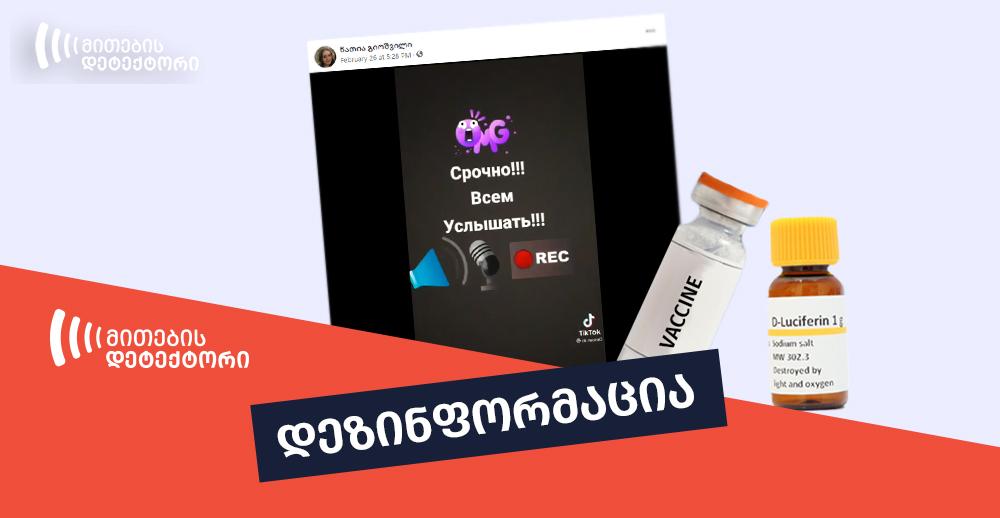 On February 26, 2021, Facebook user Natia Gioshvili published an audio recording with a Russian-language warning “Urgent! Everybody Listen!”. In the recording, a woman, who introduced herself as a general practitioner Julia Gaponyuk, is speaking about vaccination. According to Gaponyuk, in Israel 12 400 people got infected after receiving the first dose of “Pfizer” vaccine, while 69 people got infected after the second dose. According to the general practitioner, scientists note that “Pfizer” isn’t a vaccine and its first dose is immunodepressants and gen luciferase that weakens the human immune system and obstructs the right hemisphere. Whereas, the second dose, as Gaponyuk states, contains thin polymer and nanochips that aims to subjugate people by political elites. 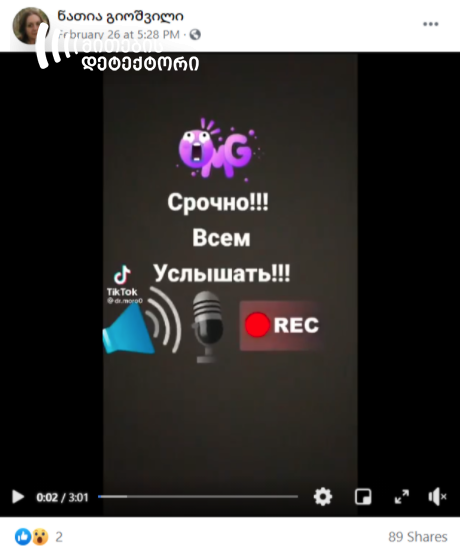 Statements about vaccination voiced by Julia Gaponyuk are false and manipulative, whereas some are a conspiracy. 1. Pfizer vaccine neither includes luciferase nor immunodepressants. Luciferase is an enzyme, a harmless substance. Whereas, the Pfizer vaccine stimulates immune response and produces antibodies 2. Given numbers for the assessment of Pfizer vaccine is manipulation because two doses and a certain time period are needed for the full efficacy of the vaccination. 3. General practitioner repeats the viral conspiracy theory alleging that vaccination aims to implant chips into people and subjugate them.

It’s worth mentioning that in the recording, the speaker introduces herself as the general practitioner. On Facebook, two profiles can be found with such profession and education. In both cases, the hometown indicated is Kaliningrad, whereas the place of residency – Nizhyn. One of the profiles isn’t active at the moment, whereas on the second profile, the last post dates back to December 11, 2020, the user disseminates disinformation and conspiracy theories about topics such as a vaccine.

1. Pfizer neither contains immunodepressants nor luciferase

In the recording, general practitioner Julia Gaponyuk notes that the first dose of Pfizer contains immunodepressant and gen luciferase, which aims to weaken the human immune system and obstruct the right hemisphere. Hence, according to her, an individual will not be able to pray. In reality, a Fact Sheet published by the U.S Food and Drug Administration indicates the ingredients of the Pfizer, and neither immunodepressant nor luciferase is included in the list. Moreover, both doses of the vaccine have the same ingredients. The vaccine doesn’t cause a weakened immune system, on the contrary, it triggers an immune response and produces antibodies that will protect people from infection.

Enzyme luciferase is used in studies, however, the COVID-19 vaccine doesn’t contain it. Read more about the topic in the article prepared by the “Myth Detector”:

Luciferin – a dark conspiracy or a bright biochemical reaction?

2. Manipulation of infection rate in the first-dose vaccinated people in Israel

General practitioner refers to the article by The Times of Israel, where Professor Nachman Ash notes that the first dose of Pfizer vaccine turned out to be less effective than expected and it’s unclear whether the vaccine can protect against mutated variants of the virus.

As of January 19, over 2 million Israelis have had their first Pfizer shot, whereas over 400,000 have had the second. According to the Ministry of Health, over 12,400 first-dose vaccinated people tested positive for coronavirus; while 69 people got infected following the second dose. However, Julia Gaponyuk uses this data in a manipulative manner.

It’s noteworthy that Israel Health Providers offer contrary data about the effectiveness of the first dose. According to the information by the Israeli Health Provider Clalit, the chance of a person being infected with the coronavirus 14 days after they were vaccinated dropped by 33%. Whereas, according to the Health Provider Maccabi, chances for infection dropped by 60% after taking the first shot of Pfizer vaccine. Both health organizations concluded it based on the data from around 400 thousand patients. According to the Israeli Health Ministry’s preliminary data based on the results of coronavirus tests among both those who’ve received the vaccine and those who haven’t, chances of infection dropped by 50% 14 days after the first shot of vaccine.

It’s important to note that on February 21, The Times of Israel published an article noting that Minnesota-based Mayo Clinic findings show vaccine’s efficacy reaches 75% 15 days after the 1st dose, then rises to 83% after 36 days, and reaches 89% after receiving two doses. Therefore, the ability of the vaccine to protect against infection increases with time.

The aforesaid claim by Nachman Ash was also discussed by BBC, according to which It’s not appropriate to compare Clalit’s research with Pfizer’s study. According to Clalit, the number of infected people dropped by 33% after the first dose of the vaccine, while Pfizer notes that the first dose of vaccine would prevent 52% from developing symptoms (efficacy is 52%) – both studies focus on different criteria. In addition, BBC states that data from Clalit isn’t available. Moreover, two weeks after the first dose isn’t enough to assess the immune reaction, which was done after three weeks in the Pfizer study. The human body needs time to recognize the genetic material of the virus, develop antibodies and T-cells because of immune response in order to prevent the virus from entering cells.

3. General practitioner’s claim alleging that the second dose of vaccine contains microchips and aims to subjugate people is a conspiracy theory

According to the general practitioner, the second dose of vaccine contains thin polymer and nanochips that aims to control people. Audio recording also notes that the world elite will subjugate people’s behavior with the respective electronic program: “Only middle-aged people and youth will remain – “functioning goods” who eat, drink and sleep. No reading books, watching theater play and movies, no creativity”.

Conspiracies about chips and electronic control program have been disseminated even earlier. According to the World Health Organization, it’s technically impossible for a vaccine to contain microchips. Vaccines are produced strictly according to the rules.

Read more on this topic:
Does Bill Gates promise us depopulation and chipping?