Is Vaccination Forced at the Kutaisi Airport? 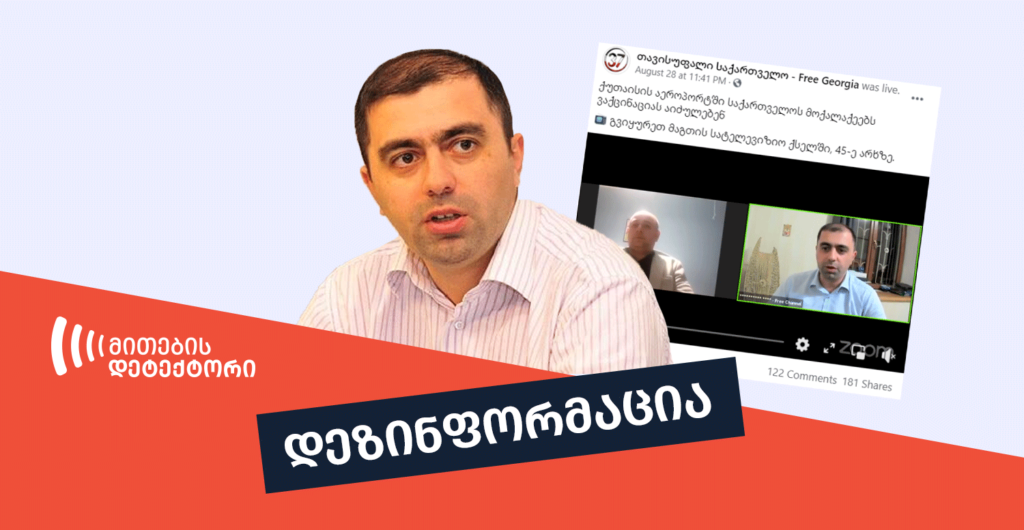 On August 28th, the Facebook page of the political party “Free Georgia” aired a live broadcast of a Zoom meeting, in which the party leader Kakha Kukava talks to Davit Dolidze. According to the video description,  Georgian citizens are forced to be vaccinated at the Kutaisi airport. The respondent claims that his children had to fly from Kutaisi airport to Budapest; despite having the negative PCR test results, they were contacted by the airport and notified that they could not be allowed on the plane without getting the vaccine. While talking about the safety of vaccines and free choice, Kakha Kukava remembers the death of a nurse in Akhaltsikhe. Davit Dolidze has also questioned the effectiveness of the coronavirus vaccines since some of them require multiple doses to build immunity, while others require only one shot. 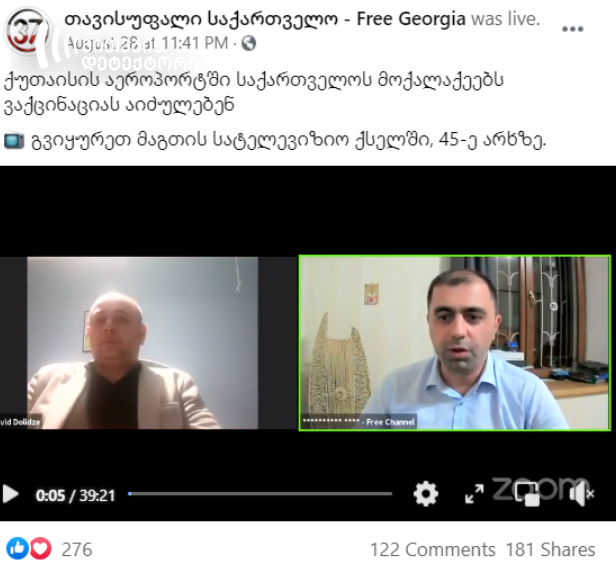 The allegation mentioned in the video description that Georgian citizens are being forced to get vaccinated at the Kutaisi Airport is false. The requirements that passengers must meet before departure vary by country. For instance, to enter Hungary, Georgian citizens must provide a vaccination certificate or proof that they have recovered from COVID-19  within the last 6 months. Otherwise, they would be requested to overgo 10 days of on-site isolation and PCR testing. In addition, the material contains other manipulative references to vaccination.

The video description, as if Georgian citizens are forced to get the COVID-19 vaccine at the Kutaisi airport, is false. There is no forced or voluntary vaccination on the territory of Kutaisi Airport, as vaccination is voluntary under Georgian law.

The entry requirements that the Georgian citizens must meet vary by destination country. These include the requirement to submit a vaccination certificate, a request for a certificate of a COVID infection during the last 6 months, or a negative result of a PCR test performed 72 hours before arrival in the country. In addition, restrictions on Georgian citizens travelling from Georgian airports, effective from January 6th, 2021, are posted on the website of the Embassy of Georgia in Hungary.

According to the regulations, Georgian citizens who have been fully vaccinated and have a vaccination certificate issued by the Ministry of Health of Georgia, or have not been vaccinated, but have recovered from a coronavirus infection in the last 6 months before entering Hungary and have an official proof, can enter Hungary without restrictions.

Citizens who do not comply with the above-mentioned criteria are subject to restrictions on entry into Hungary. In particular, they will only be able to enter the country with a Hungarian residence permit, category D visa or several other exceptions.

Exceptions apply to non-citizens who:

Non-citizens arriving in the territory of Hungary for transit must undergo a medical examination and be given 24 hours for transit if they do not show any suspicious symptoms.

In addition, the website of the Embassy of Georgia in Hungary also states that Hungary does not recognize PCR tests performed in Georgia and Georgian citizens who fall into the above categories will have to undergo a 10-day mandatory house quarantine or a 48-hour PCR test in Hungary at their own expense.

In the video, while talking about the safety of vaccines and the need for free choice, the party leader, Kakha Kukava, manipulatively refers to the death of Megi Bakradze, a nurse from Akhaltsikhe:

Kakha Kukava: “When they talk about murder, a beautiful young girl was killed in Akhaltsikhe, a healthy person was killed. It’s not included in the statistics that they are using now to claim that all the people who died were not vaccinated.”

Megi Bakradze, a nurse from Akhaltsikhe, died on March 19th, 2021. According to preliminary data, she allegedly developed anaphylactic shock after taking the jab. The case is being investigated under Article 116 of the Criminal Code, which stipulates negligent killing. The Georgian Prosecutor’s Office has charged 2 doctors and 1 nurse with false testimony. According to the prosecutor’s office, the accusation was false, as if Megi Bakradze, who was in the post-immunization delay room, underwent appropriate medical procedures after her health deteriorated. It turns out that the doctors did not give any medicine to Megi Bakradze after the complications. Defendants plead guilty. The case is still under investigation.

As for the death statistics mentioned by Kakha Kukava, in this case,  the discussion concerned the statistics of deaths due to coronavirus infection and, consequently, the case of Megi Bakradze could not be reflected in these statistics.

In the video, respondent Davit Dolidze questions coronavirus vaccines since some need two or more doses. He draws parallels with the vaccines made in his childhood that require a single dose, listing vaccines for tuberculosis, plague, dysentery and Down syndrome.

There are no vaccines for dysentery and Down Syndrome.

The most common cause of dysentery is a Shigella infection. According to the FDA, the process to develop a vaccine to prevent the disease is still ongoing.

Down syndrome is not caused by any virus or bacterium but by a chromosomal genetic change, and, therefore, there is no “vaccine for Down Syndrome”.

As for the necessity of a second dose of coronavirus vaccine, studies have shown that the immune response was relatively weak after the first dose and that the percentage of protection against the virus increased significantly after the second dose. Two doses are also needed for other diseases, such as the measles-mumps vaccine, as well as the hepatitis A and B vaccines.

Regarding the possible third dose of coronavirus vaccine, the emergence of mutational variants of COVID-19 has reduced the effectiveness of the. However, the existing vaccines are still effective in protecting against disease complications and death. Similar so-called Booster doses are also made for other vaccines; for example, it is recommended to do a tetanus vaccine booster after 10 years as the acquired protective effect can diminish over time

About Free Georgia and Free Channel

The party “Free Georgia” actively campaigns against mandatory vaccination and regularly disseminates manipulative information about the coronavirus vaccines. For example, on August 30th, a video was posted on Free Georgia’s Facebook page in which Public Defender Nino Lomjaria explained that employers have the right to request a vaccination certificate or a PCR test, and the practice is not discriminatory. Lomjaria also asserted that this practice should also consider exceptional cases. The video was published with a manipulative description as if the Public Defender said that those who do not get the vaccine would be fired.

The video used the “Free Channel” logo and was also posted on the channel’s Facebook page using the same manipulative description.

“Free Channel” is a media outlet affiliated with Kakha Kukava’s party, often spreading false and manipulative information about the coronavirus vaccines. The channel aired programs of the “Scientists’ Club” hosted by anti-vaxxer homoeopath Tina Topuria. Tina Topuria and other anti-vaxxers were also disseminating vaccine-related disinformation during live broadcasts aired on the channel.

The Facebook page of the “Free Channel” was created on December 22nd, 2019, and was initially called “Ilioni.” The page goes under the name “Free Channel” from July 5th, 2021. 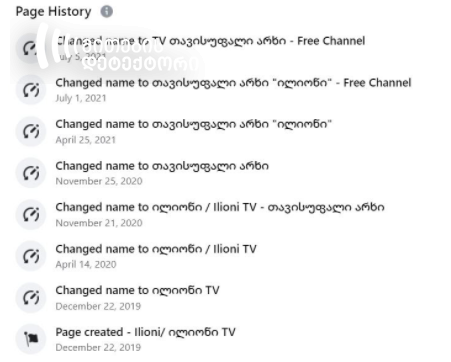 The disinformation voiced by the “Free Channel” were fact-checked by “Myth Detector” in the past: