Is there Discrimination in Georgia? – Prime Minister Denies, Policemen Investigate 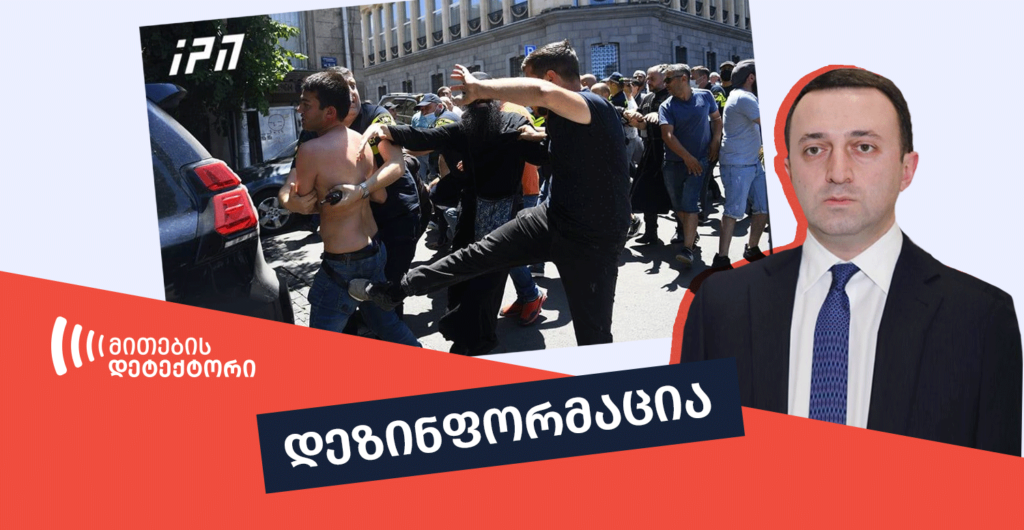 On July 7th, during the briefing held by the European Commissioner of Neighborhood and Enlargement Oliver Varhelyi, Giorgi Gharibashvili claimed that the anti-discrimination law introduced in 2014 aims to undermine any discrimination within the country, but, at the same time, due to the Georgian traditions, the concept of “family” was further specified in the constitution. Furthermore, the Prime Minister has also stated that discrimination based on different opinions and lifestyles does not occur in Georgia.

Irakli Gharibashvili, Prime Minister: “I am reminding you that during my time serving as Prime Minister in 2014, we have introduced the anti-discrimination law to end any form of discrimination within the country. At the same time, while considering our culture, traditions and the interests of our population, we have then managed to define ‘marriage’ in our constitution. This is another topic, but nowadays, in our country, there is no discrimination against the people of a different opinion and different lifestyle.”

The claim of Irakli Gharibashvili that there is no discrimination against people of different opinions and different lifestyles in Georgia is false. According to the latest data of the Ministry of Internal Affairs of Georgia, Prosecutor’s Office and the Supreme Court of Georgia, within the last three months of 2020, 246 criminal investigations have been initiated for discrimination-based intolerance, while 95 of which ended with a prosecution.

In 2020, the Ministry of Internal Affairs of Georgia, the Prosecutor’s Office and the Supreme Court of Georgia, with the support of the Council of Europe, started to create the general statistic about the crimes motivated by discrimination-based intolerance. The first pilot report covers the timeframe between the 1st of October to December 31st, 2020. The report states that within the last three months of 2020, 246 criminal investigations have been initiated for discrimination-based intolerance, while 95 of which ended with a prosecution—most (87) out of prosecuted cases concerned gender-based crime.

On June 17th, 2021, the Prosecutor’s Office of Georgia published the 2016-2020 statistics regarding the crimes committed due to intolerance and against the LGBTQ+ community on the basis of sexual orientation and gender identity. According to the Prosecutor’s Office, due to the crime of intolerance, 675 people have been prosecuted, while criminal investigations have started against 100 persons on the basis of discrimination against sexual orientation and gender identity.

In particular, in 2020, 28 people were recognized as victims of discrimination based on sexual orientation and gender identity:

In 2019, Public Ombudsman studied 155 alleged cases of discrimination. The quantitative distribution of the potential signs is the following: 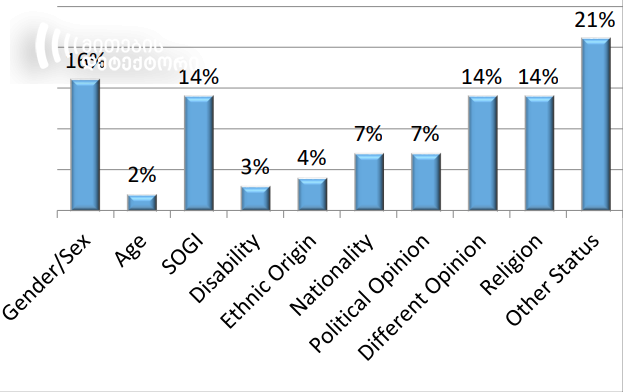 Out of the alleged discrimination cases studied by the Public Ombudsman in 2019-2020, the most prevalent was discrimination on the basis of religion, nationality and homophobia. Including:

In addition, according to the 2020-21 (May) report of the Tolerance and Diversity Institute (TDI), the state attitude towards the fundamental right of belief and religion becomes more and more alarming. “The government openly and intensively intervenes with the freedom of religion, neglects the principle of equality and deepens the discrimination among religious groups.” The report of TDI covers multiple instances of religion-based discrimination. Such examples include illegal breach into the freedom of religion, illegally restricting the freedom of movement to the religious organizations, giving the Georgian Patriarchate special privileges to celebrate religious events, crimes based on religious intolerance and religion-based discrimination during the national exams: