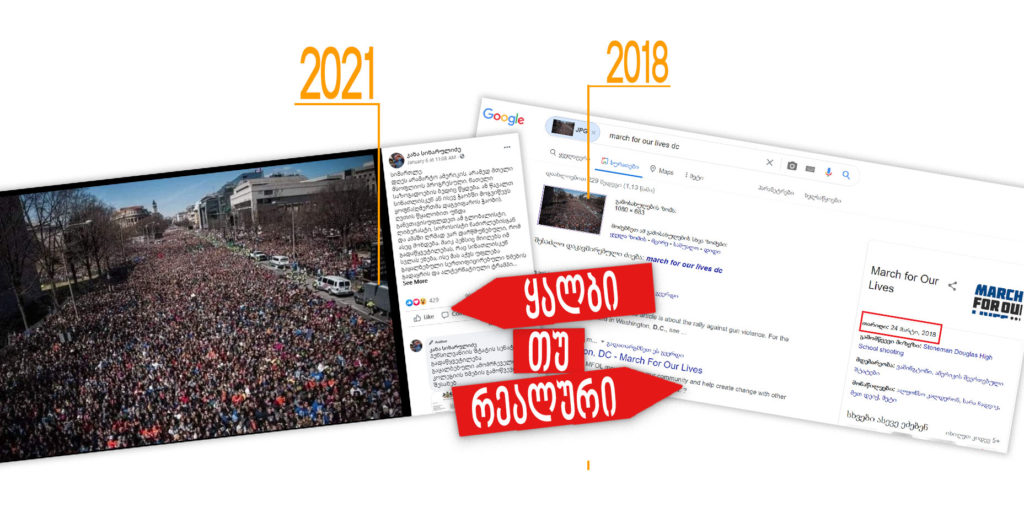 On 6 January, a Facebook user, Kakha Sikharulidze, posted a message in support of Trump, saying that the US presidential election was rigged and that the victory of Trump was of global importance. A photo accompanying the post showed, according to the user, those people who arrived in Washington to join the march in support of Trump on 6 January, a day before (on 5 January).

The Facebook post is misleading as the photo published by the user does not depict a gathering of Trump supporters on 5 January 2021, but a demonstration, March for Our Lives, held in support of gun control legislation in Washington on 24 March 2018.

A simple reverse image search on Google has shown that the photo was taken on 24 March 2018 during the March for Our Lives demonstration organized by students in support of stricter gun control laws.

The march was held in response to a shooting at Stoneman Douglas High School (on 14 February 2018), that claimed the lives of 17 people. According to various opinions, had the gun control been in place, the tragedy could have been avoided. Students participating in the march on 24 March demanded a stricter gun control regulation.

A similar photo with a false message saying that it shows supporters of Trump in Washington on 5 January circulated in the USA too. According to a US fact-checking website, Lead Stories, the march in support of Trump to voice protest against the results of the presidential election was planned on 6 March and no gatherings were seen in the capital city on 5 January; furthermore, the photo shows a sunny day whereas 5 January was a cloudy day in Washington.