Is Georgia Obliged to Buy Vaccine Only from COVAX Platform? 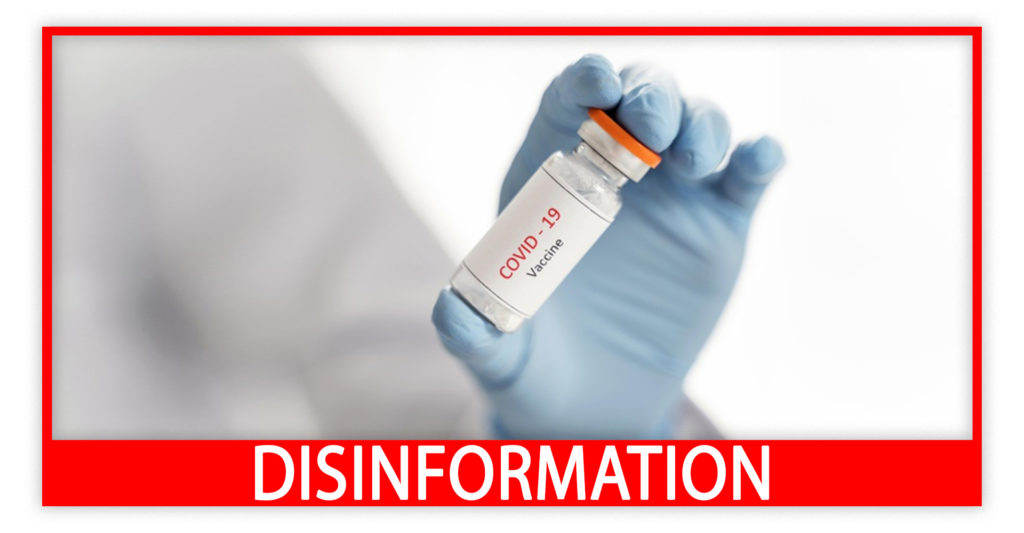 On December 5, Arno Khidirbegishvili, the Editor-in-Chief of a news agency “Saqinform” published a post on his personal Facebook account about the purchase of coronavirus vaccines. The post claimed that the best vaccine is a Chinese one, not the one by the American Pfizer, and that Georgia should negotiate with China about the vaccine. As Khidirbegishvili claimed, Georgia is bound to the platform (COVAX) and is not allowed to buy the vaccine from other manufacturers, independently from COVAX. 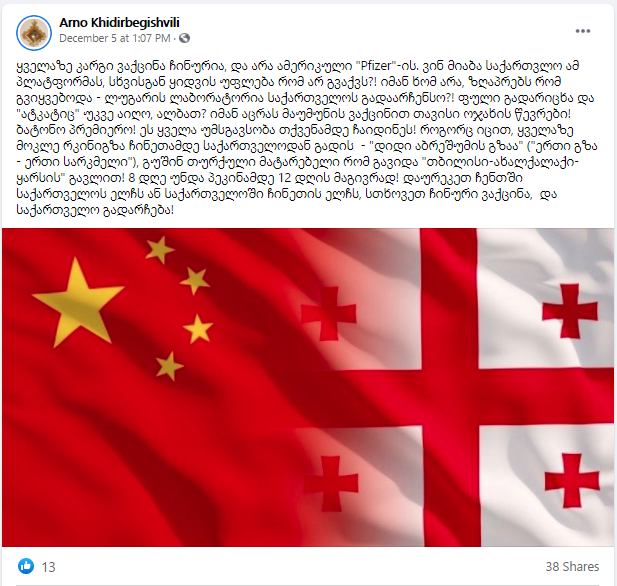 Khidirbegishvili’s claim that due to the partnership with COVAX, Georgia is not allowed to buy the vaccine from other manufacturers is disinformation. According to the Head of the National Center for Disease Control and Public Health, Georgia is working through its embassies on directly purchasing the vaccine from various manufacturers. As for the vaccines of Chinese companies, they have not yet disclosed the results of the final phase of their studies, unlike Pfizer.

On November 30, Amiran Gamkrelidze, the Head of the National Center for Disease Control and Public Health of Georgia, made a statement regarding the purchase of the coronavirus vaccine. According to him, Georgia will likely receive the coronavirus vaccine in March or April of 2021. To this end, negotiations both with the COVAX platform as well as the vaccine producers are underway. Gamkrelidze also noted that Georgia will be able to choose the preferred vaccine based on the conditions of the reached agreements.

Amiran Gamkrelidze: “COVAX platform is going to buy several billion doses of various vaccines for 2021. Vaccines from Oxford-AstraZeneca and Pfizer will be among them. We have paid an initial contribution – GEL 4.5 million. We paid a bit more, but with the condition that we will be able to choose the vaccine. That is, we will not import whatever we are offered, but will choose the vaccine ourselves… We are also working on direct purchases. We had a large teleconference related to a direct purchase on Friday as well. Moreover, we are working with manufacturers through our embassies…”

About the COVAX platform.

Georgia officially joined the COVAX Facility, created by the United Nations, on August 31, 2020. The UN founded the facility on April 24, 2020 to facilitate the creation of diagnostic and treatment options for COVID-19, as well as the development, manufacturing, and fair distribution of the vaccine. The facility does not prohibit its member countries to purchase vaccines independently – countries may carry out negotiations bypassing the platform as well.

COVAX Facility is cooperating with nine most promising vaccine manufacturers and will purchase a pre-ordered number of doses from various manufacturers after the final registration of the vaccines. It is noteworthy that the nine candidate vaccines, apart from the British, American, and German vaccines, include a Chinese Clover vaccine and another one manufactured by the University of Hong Kong that are currently undergoing clinical trials.

Read more about Georgia’s relations with the COVAX Facility and the conditions of the vaccine purchase in an article prepared by the Myth Detector:

About Pfizer’s and Chinese vaccines.

American Pfizer and German BioNTech published the results of their final phase of their vaccine research on November 18. According to those results, the vaccine showed a 95% efficiency in its trial of 44,000 volunteers without any noticeable side effects. The United Kingdom is the first country to have approved the Pfizer vaccine for wide use. It has ordered 50 million doses of the vaccine.

Four main manufacturers are developing vaccines in China: CanSino, Wuhan Institute of Biological Products, Sinovac, and ZFLongkema. Three of the four vaccines are currently at the phase three trial. Mass production and export of the Chinese vaccines is planned from 2021.

Although none of the Chinese vaccines have passed the third phase of the trial yet, three Chinese vaccines were already approved for a limited use in summer 2020.  Vaccines or medicaments are approved for limited use in case of emergency needs, when their safety and efficiency has not been confirmed yet. China first approved the use of CanSino vaccine for militaries and healthcare workers in July, after the phase two trials showed a high efficiency. However, the phase three trial of CanSino’s vaccine are still underway and the final results have not been published yet. The vaccine by the Wuhan Institute of Biological Products, developed by a state company Sinopharm was also approved for a limited use on September 14 and is currently at the phase three trial. One of the most promising Chinese vaccines, developed by Sinovac, is also undergoing phase three trial and was approved for a limited use in July, at the end of the phase two trial after being tested on 743 volunteers. The third phase trial was also underway in Brazil, where the trial was stopped due to side effects in one of the volunteers, only to be resumed briefly afterwards.