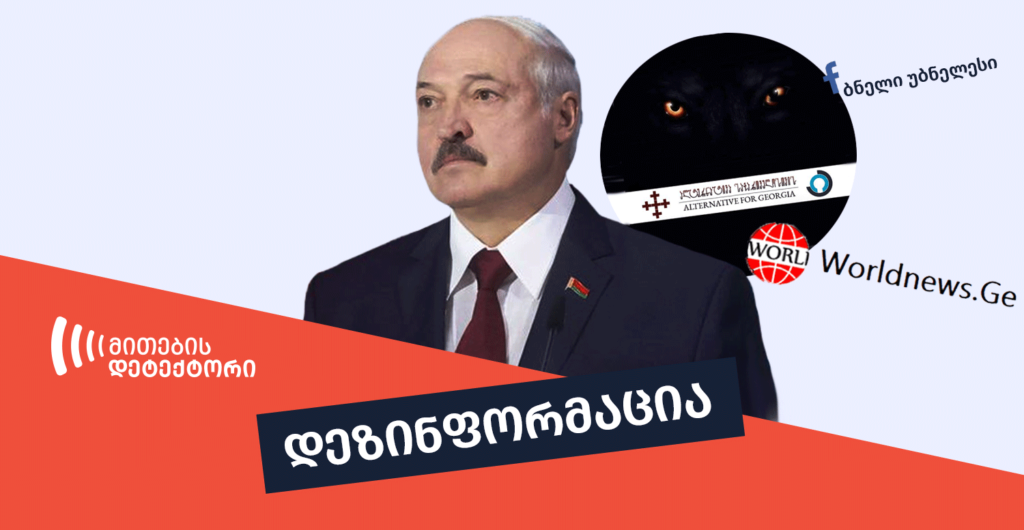 On July 19th, Facebook account “Bneli Ubnelesi” and on July 20th, Facebook page “Worldnews.ge” have published a post, claiming that the International Monetary Fund (IMF) offered Belarus 940 million dollars in return for imposing the covid-19 regulatory measures such as lockdown, curfew and self-isolation. The posts stated that Lukashenka had refused the offer, saying: “Belarussians will not march to the beat of someone else’s drum.” 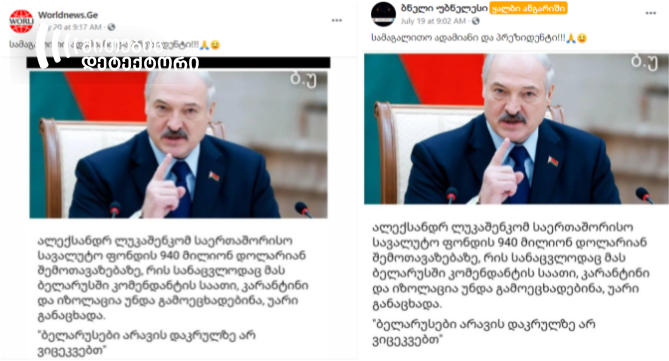 The post of “Bneli Ubnelesi” and “Worldnews.ge” contains false information. In reality, Belarus asked the IMF for a loan determined under the framework of the Rapid Financing Instrument (RFI). The agreement could not be reached. The IMF does not confirm that it asked Belarus to impose specific regulations; nonetheless, the organization specifies that receiving similar forms of international aid requires the country to meet certain standards of transparency.

On March 30th, 2020, the National Bank of Belarus stated that the country had commenced discussions with the IMF. Later, on June 19th, 2020, during the governmental meeting held in Minsk, Lukashenko discussed the same topic, claiming that within the framework of the Rapid Financing Instrument, Belarus could receive 940 million dollars from its Western partners. Lukashenka also mentioned that the IMF had asked the Belarussian government to impose strict anti-COVID sanctions, which, according to Lukashenka, was totally unacceptable.

The Rapid Financing Instrument (RFI) provides rapid financial assistance, which is available to all member countries facing an urgent balance of payments need. The RFI replaced the IMF’s previous emergency assistance policy and can be used in a wide range of circumstances, including those arising from commodity price shocks, natural disasters, conflict and post-conflict situations, and emergencies resulting from fragility. More than 20 countries have received such support after the emergence of the global pandemic.

In August 2020, the German Research Center “CORRECTIV” contacted the IMF to determine the reason behind the failed agreement. The international organization did not mention anything about the potential demand for imposing strong anti-COVID measures in the reply. Nonetheless, the letter accentuated the need for high-level transparency and accountability to receive such support. Furthermore, it is worth mentioning that IMF did not suggest Belarus any financial assistance, as Belarus was the one asking for it.

CORRECTIV has also contacted the German Ministry of Finance, which clarified that the Rapid Financing Instrument does not involve any kind of economic reform as a precondition. However, the countries characterized by high levels of corruption have to make sure that the received support is allocated accordingly and transparently.

Disinformation about the IMF demanding strict COVID measures in exchange for 940 million dollars was shared by various foreign web pages last year. In an article shared by the platform DATABASE ITALIA, Italian journalist Nicola Bizzi claimed that international organizations made the same offer to the Italian politicians as well, who, contrary to Lukashenko, have allegedly accepted it.  The author has also claimed that the number of deaths caused by the coronavirus is not based on any source and simply aims to terrorize people.

On August 15th, 2020, the claims of Bizzi were published on the German blog “HEIMDALL WARDA.“  On January 5th, the English language website Ghqmagazine.com published an article stating that according to the “reliable sources of news outlets, the World Bank has tried to bribe Lukashenka by offering 940 million dollars. The author did not provide any other source than the statement of Lukashenka himself.

“Bneli Ubnelesi” represents a personal Facebook account, which uses the images of “Alt-Info” as the profile picture and shares its content. “Alt-Info” is linked with the violent group of Konstantine Morgoshia, “Alternative to Georgia,” and Levan Vasadze’s party – ERI. Previously, the account used the logo of Vasadze’s party as the profile picture. All three organizations (ERI, Alt-Info, Alternative for Georgia) were actively involved in the organization of the anti-Pride demonstration on July 5th, which resulted in the violence against journalists. The account that uses the logos of violent groups indicates ucnobi.macnobi.73 in the URL address.

Facebook page Worldnews.ge was created in 2017. The website https://worldnews.ge/ indicated in the  “About us” section, on the other hand, was registered on May 7th, 2021. By opening the link, one can see that the page is under construction. 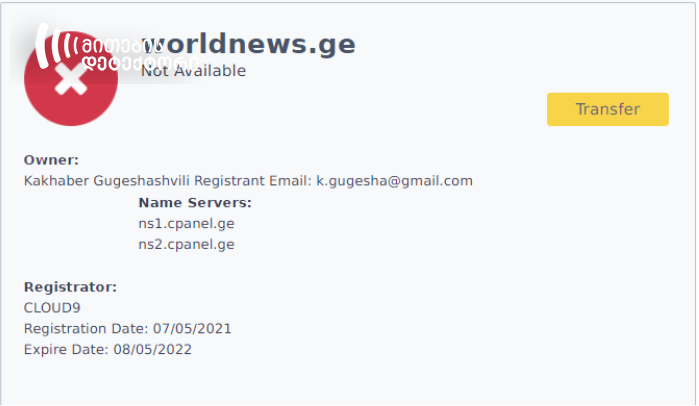