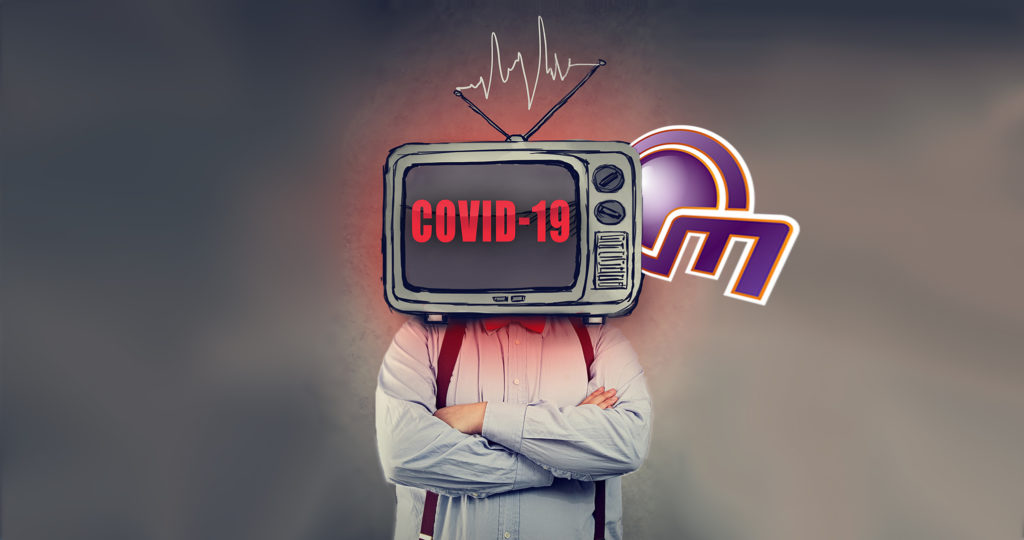 On February 12, 2021, Facebook user Lado Chkhetiani published the February 11 recording of the program “ღამის სტუდია” (Night Studio) aired on “Obiektivi” TV. In the recording, the host Nino Ratishvili and her guests (Tina Topuria, Irina Gelashvili, Maiko Smith) discussed the vaccines. The host and her guests develop a narrative that it is impossible to trust the effectiveness and safety of COVID-19 vaccines and present several claims as proof: 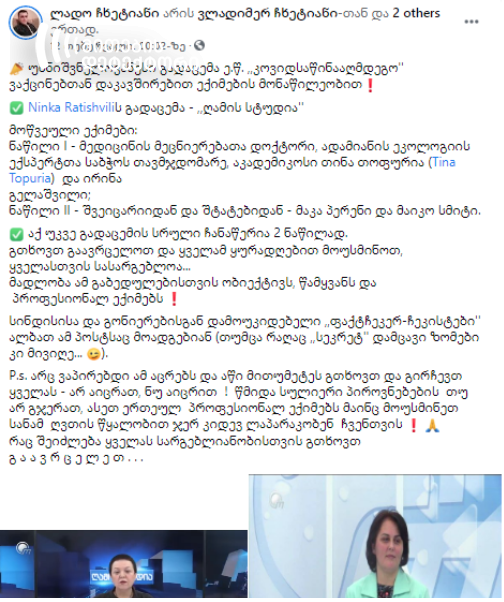 As of February 18, Lado Chkhetiani’s post has 1739 shares. Besides Lado Chkhetiani, the recording of the aforesaid program “Obiektivi” TV was also published by the host Nino Ratishvili on her Facebook account. The video was also shared by the Facebook user Dato Salukvadze, whose post has 214 shares. 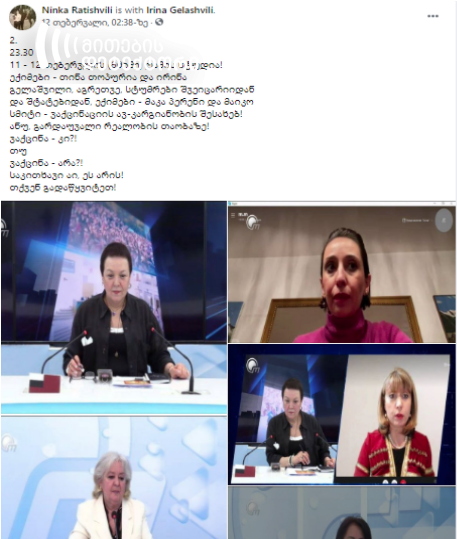 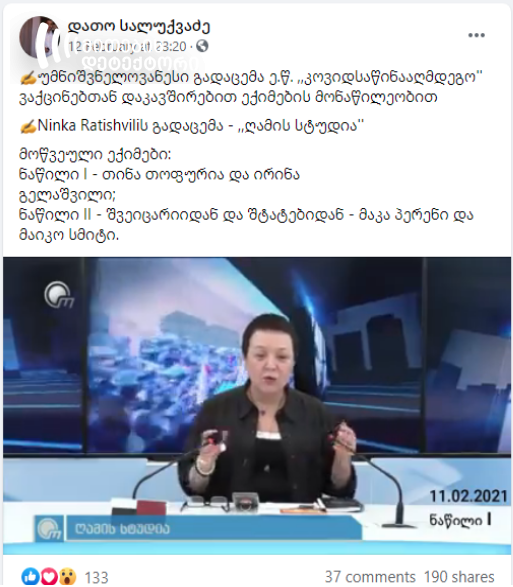 The proportion of claims about the COVID-19 vaccine disseminated by the guests on the program of “Obiektivi” TV is disinformation, whereas some opinions lack evidence and stimulate scientifically unfounded fear of vaccine.

Disinformation #1: First vaccinated person in Switzerland died a few days after the vaccination. Pfizer apologized to the family of the deceased.

According to Tina Topuria’s claim, in Switzerland, 91 years old patient died after getting vaccinated, as a result, the patient’s family received apologies, while the trial on the aforesaid fact has started and is still in the process to this day. The death of 91 years old nursing home resident on December 29, 2020, few days after the vaccination, was followed by speculations on social media. On December 30, the Swiss regulatory agency responded to the issue and published the statement, according to which medical investigation did not reveal any connection between the vaccine and the cause of death. The 91 years old patient with multiple severe illnesses in her medical history died of natural causes. Pfizer also responded to the death of the elderly. The company expressed their condolences and noted that deaths that are unrelated to the vaccine, are unfortunately likely to occur at a similar rate as they would in the general population of elderly and at-risk individuals who are currently being prioritized for vaccination. Therefore, information alleging that first they apologized to the deceased’s family and then denied its link to the vaccine isn’t true, whereas the claim as if the deceased’s family referred to the court cannot be found in open sources and lacks evidence.

Disinformation #2: Before the vaccination rollout, England introduced  laws  that excludes any  liability to the person negatively affected by the vaccine

Although U.K indemnified several manufacturers of COVID-19 vaccine candidates including Pfizer and AstraZeneca against vaccine-related liability, it doesn’t imply that nobody takes responsibility for the serious damages of the vaccine. In the December 3, 2020 statement by the British government, we read that government has decided to add COVID-19 vaccines to the “Vaccine Damage Payment Scheme”. VDPS is a government-funded agency that provides financial compensation for those suffering from health problems because of a specific vaccine and the aforesaid scheme has been in force for years now. Hence, Tina Topuria’s claim alleging that neither private manufacturer nor government in the U.K accept liability for adverse effects of the vaccine isn’t true.

Lacks evidence #1:  COVID-19 RNA vaccines will cause the mass spread of autoimmune diseases.

As Topuria says, after viral RNA and proteins produced from it enters the body via vaccine, the body will consider it as a foreign agent and the immune system will start to attack its own cells resulting in the development of various autoimmune diseases as an adverse effect of the vaccine. Such allegations about vaccines have circulated on foreign social networks even before, however, currently, there’s no evidence to back up the aforesaid allegations. In reality, autoimmune disease is a chronic illness and usually needs a long-lived foreign agent in the body. In contrast, the genetic material of the virus used in RNA vaccines is an unstable molecule that rapidly disintegrates (that’s why the storage of aforesaid vaccines requires special conditions) and breaks down in the cell making long-term autoimmune reaction practically impossible to develop. Clinical trials conducted by the main manufacturing companies of RNA vaccines Pfizer and Moderna didn’t reveal autoimmune diseases as an adverse effect either.

Lacks evidence #2:  COVID-19 vaccines cause immune dependency. Individuals might contract the virus much easier after receiving Pfizer and Moderna vaccines

One of the guests on the program, Maiko Smith cites American doctor Simone Gold as the source for the aforesaid claim. According to Smith, when testing on animals, the SARS virus vaccine caused immune diseases and since the SARS virus is very similar to the COVID-19 causing virus, Moderna and Pfizer COVID-19 vaccines will definitely cause such complications.

The adverse effect that Smith talks about is known as “Antibody-Dependent Enhancement” (ADE) to immunologists. During ADE, antibodies developed through vaccines do not protect the body from the virus, but instead, they increase the risk of infection and enhance the viral infection. Such adverse effect was indeed identified in separate cases during the animal trials stage of SARS-CoV vaccines and as a result, the aforesaid vaccine studies didn’t continue to the stage of human trials. Despite the similarities between the two viruses, this fact alone isn’t enough to prove that Pfizer and Moderna vaccines will also cause immunopathological conditions similar to ADE. Both mentioned COVID-19 vaccines have completely passed all primary trial phases including animal and human clinical trial phase and demonstrated high efficiency against the virus. Therefore, the current scientific knowledge cannot provide a ground for the claim that the Pfizer and Moderna vaccines cause immunopathologies and increase the infection risk.

It’s worth mentioning that Dr.Simone Gold who Maiko Smith referred to as the source has systematically disseminated various disinformation about coronavirus and vaccines on social network

Other false information voiced on the program

Besides the above-mentioned claims, the hour and a half-long recording also contain the false information that “Myth Detector” has already written about:

As the World Health Organization explains, infodemic is too much information that undermines public health response and promotes alternative agenda by intentional dissemination of false information.