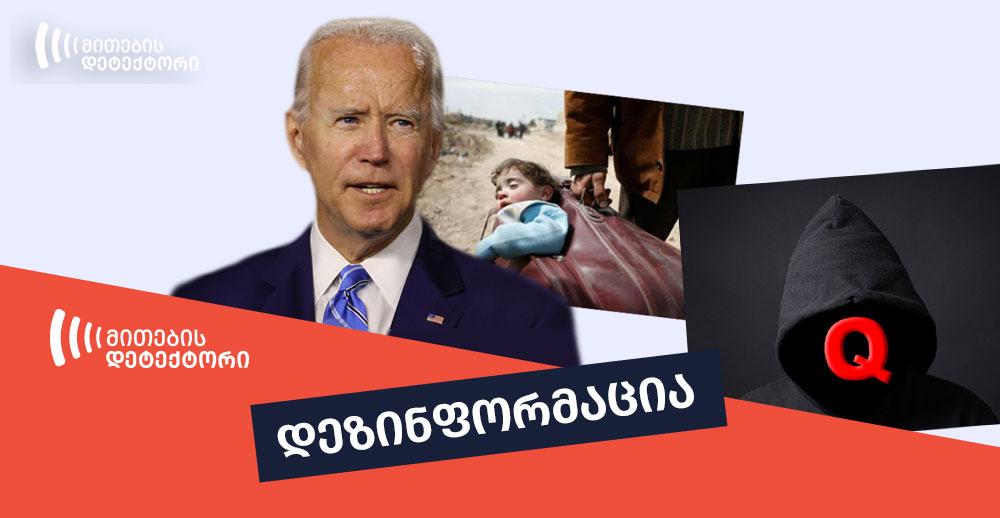 On March 28, 2021, Facebook user Levan Navi published a post about detention of illegal migrants at the U.S.-Mexico border. Levan Navi slams President Joe Biden’s immigration policy, claiming that the U.S. President’s administration is hiding 3,000 corpses of illegal migrants, including children, in the warehouses at the border between Texas and Mexico. According to the post, the so-called “Deep State” is actually financing the migrant crisis at the border. Besides the migrant crisis, the author also attributes harvesting chemical adrenochrome from children’s blood to “the Deep State.” Levan Navi also noted that Biden’s presidency and his immigration policy were also supported by the “children eating” “Deep State.” The post is accompanied by the story and videos of far-right platform Project Veritas showing grave conditions of migrants from Donna immigration facility in Texas. 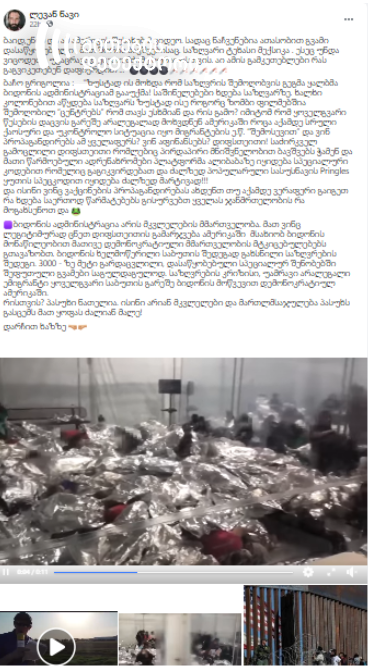 Focusing on the Texas-Mexico border crisis, Facebook user Goria Shiva published a photo showing a baby sleeping in a suitcase. The author claims that the photo depicts a migrant baby at the Mexican border who appeared in this situation due to Joe Biden’s immigration policy. 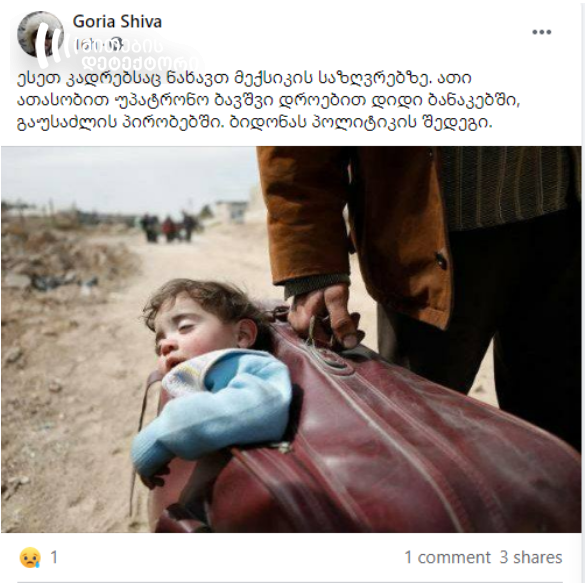 The information as if the Biden administration is hiding 3,000 dead migrants in the warehouse at the U.S.-Mexico border is false, whereas the videos uploaded by Levan Navi show temporary camps for detained migrants, not warehouses for corpses. The claim as if the Mexican border crisis and the Biden administration are managed by children’s murderer “Deep State” is a conspiracy theory, while Goria Shiva’s post is a photo manipulation. In fact, the photo was taken in 2018 in Syria, not at the Mexican border.

To back up his claims about dead migrants, Levan Navi provides several videos, showing people wrapped in foil lying on the ground. At a glance, it leaves an impression that these people are not alive. The video footage is a fragment from the story aired by far-right platform Project Veritas on March 22, 2021. A journalist in the video speaks about the problem of overcrowding and migrant children’s grave conditions at Donna immigration facility. He, however, says nothing about the dead. In its article referring to an anonymous source, Project Veritas notes that as of March 22, there was an average of 3,000 people in custody there. The article, however, does not mention the dead people.

As for the official reports, the Biden administration first published photo and video materials depicting the situation at the Donna housing facility located at the U.S.-Mexico border on March 23, 2021. The photos show migrants, including children, staying in the overcrowded facility and sleeping on thin mattresses put on the ground. Besides photos, on March 23, ABC News published an exclusive video. Although the President’s administration was criticized for overcrowded camp and grave conditions of migrants, not a single official source involves reports about 3,000 and even one migrant death. 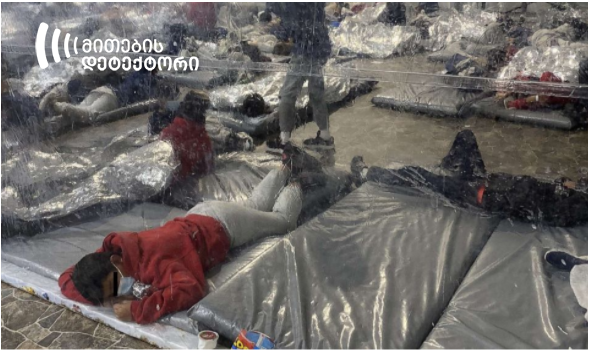 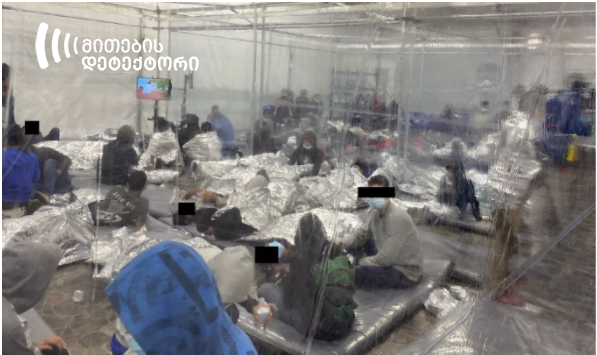 The Donna immigration facility is a temporary shelter for illegal migrants detained at the Mexican border, where they are kept until being transferred to special shelters operated by the U.S. Department of Health and Human Services. According to the U.S. media reports, number of illegal migrants, especially minors who keep crossing the border unaccompanied by their parents, increased after Biden reversed ex-President Donald Trump’s strict anti-immigrant policies in January 2021, shortly after swearing-in. As of March 23, about one thousand people remain in the Donna camp controlled by the U.S. Border Patrol.

The photo spread by Facebook user Goria Shiva on March 30, 2021 was actually taken on March 15, 2018 and it depicts civilians from Eastern Ghouta, who fled their village, crossing by foot to army positions in the first mass exodus from the besieged enclave. The photos of a child sleeping in a bag were taken by Omar Sanadiki of Reuters.

The photo in question is frequently used as a symbol of humanitarian crisis caused by the Syrian conflict and contrary to Goria Shiva’s claim, it has nothing in common with the situation at the U.S.-Mexico border. It is noteworthy that Facebook user Goria Shiva systematically spreads disinformation and conspiracy theories targeting the Biden administration. For example, in February 2021, the account wrote about the conspiracy theory spread by QAnon regarding a special operation carried out in the White House against pedophile cannibals. See details in Myth Detector’s article:
“The information about a special operation conducted at the underground tunnel is a conspiracy by QAnon“

Goria Shiva frequently refers to Telegram’s Russian-language channel Peach_Blossombazi, which has 69,000 subscribers and is owned by Tatianapb. Peach_Blossombazi’s address is also featuring in the subtitles of the videos spread by Levan Navi.

A right-wing group known as QAnon has been spreading conspiracy theories about the so called “Deep State” on various online platforms since 2017. According to these conspiracy theories, cannibal Satanists, the so called “Deep State,” have taken control of American government institutions, politicians, celebrities and academic community. To the FBI, it is a potential domestic terror threat.

According to Levan Navi, not only “Deep State” representatives are provoking the migrant crisis, but they are secretly harvesting chemical adrenochrome from children’s blood. A modern myth about adrenochrome and children’s torture has just emerged from the QAnon movement. Georgian cleric Elizbar Diakonidze also spread an identical conspiracy theory in Georgian media outlets in 2020. See details in Myth Detector’s article:   “Who Stands Behind the Conspiracy that U.S. Americans are Allegedly Using Baby Blood to Become Prettier?”