How Were the African Swine Fever and the Brown Marmorated Stink Bug Spread in Georgia? 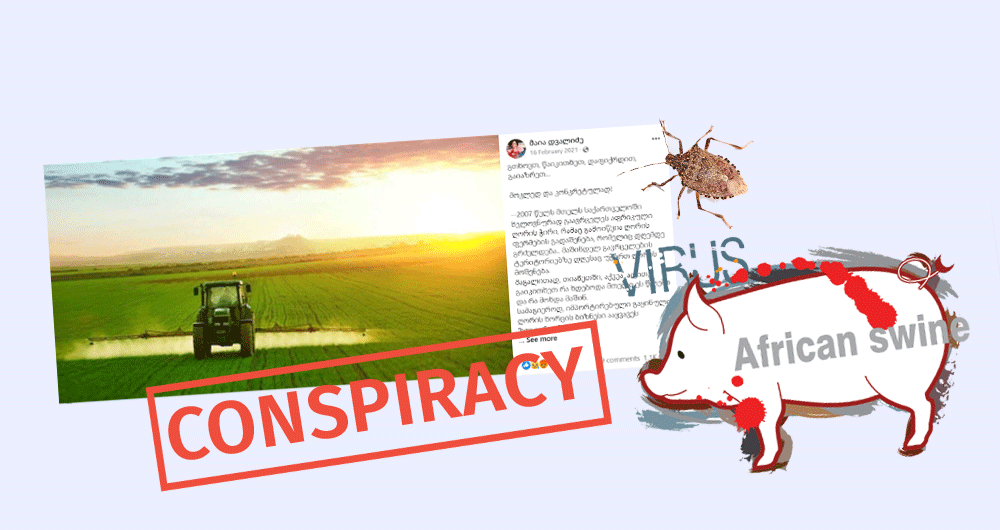 On February 21st, 2021, the Facebook user “Maia Dvalidze” published a post that allegedly lists the crimes committed by different governments of Georgia. Among the entries, one can find the spread of African swine fever in Georgia in 2007 and the invasion of pheasants in hazelnut plantations in 2015.

As of July 27th, 2022, the post is still actively circulating on social media and has more than a thousand shares.

The disseminated post represents a conspiracy. Research samples showed that African swine fever entered Georgia from South-Eastern African countries (Mozambique, Madagascar, and Zambia). As for the Brown Marmorated Stink Bug, in 2014, it spread from Italy to Sochi and then through Abkhazia in 2015 to the rest of Georgia.

What is African swine fever, and how did it spread in Georgia?

African swine fever is a deadly infectious disease with a high transmissibility rate and can infect both wild and domestic pigs of any age.

The spread of the disease occurs both in live pigs and through pork products, which is why countries take biosecurity measures when importing pork. The main mechanism in preventing the spread of African swine fever is to prevent the introduction of the causative agent into the country. For instance, in 2019, after two dead wild boars in Belgium were confirmed to have African swine fever, Denmark began building a 70-kilometre fence along the German border to prevent the migration of wild boars from Germany. Notably, the virus remains on shoes and clothes, so people can also be carriers, although African swine fever does not infect people and, therefore, does not threaten them. Once the diagnosis is made, it is necessary to quarantine and destroy the infected pigs. For the purpose of prevention, it is important to burn all the remains of slaughtered and dead pigs, including stalls and other equipment.

African swine fever first appeared on the African continent in 1909. In 1921, Montgomery officially studied African swine fever in Kenya and described the mechanism of disease spread. From the continent of Africa, the disease entered Portugal in 1957, and in 1960, it was detected in the territory of Spain. Eradication of the disease in European countries was achieved only as a result of the mass destruction of pigs.

African swine fever appeared in the territory of the Soviet Union in the 1970s in the Odesa region and Moldova. The disease was first observed in Georgia in the spring of 2007 and soon spread throughout the country. According to the research conducted in 2008 about the isolate of African swine fever virus, the virus causing African swine fever entered Georgia from South-Eastern African countries. To determine the genotype of the virus, DNA fragments taken from the genome of domestic pig isolates in Georgia were compared with isolates of another virus (ASFV). Analysis of these sequences showed that the 2007 isolates from Georgia are closely related to genotype II isolates circulating in Mozambique, Madagascar and Zambia. There is an assumption that the pigs received infected meat, which was transported to Georgia by a ship transporting meat products and then spread to the region.

How was the Brown Marmorated Stink Bug Spread in Georgia?

The Asiatic Brown Marmorated Stink Bug (Halyomorpha halys) is an invasive stink bug that feeds on host plants. The bug starts feeding on the plants in spring and continues until late autumn. It feeds on the juice of leaves, twigs and fruits, and in addition to nuts, it damages various types of fruit trees, berries and vegetable crops.

Measures carried out by Georgia to Eradicate Halyomorpha halys

The Asiatic Brown Marmorated Stink Bug (Halyomorpha Halys) was recorded in Georgia for the first time in 2015. In 2016, the pest caused a significant loss of hazelnut and corn crops. From this period, the National Food Agency conducted various measures to combat the bug, including full-scale monitoring in the entire country, after which the area of ​​spread of the bug in Western Georgia was determined, the dates of poisoning were also determined, and special trapping traps (pheromones) were placed. The National Food Agency purchased the appropriate drugs and equipment, which were handed over to local municipalities.

In 2016, the National Food Agency of Georgia and the world’s leading nut buying company Ferrero created an international technical committee to analyze the problem and develop ways to solve it.

In January 2020, a scientific meeting was held, organized by the National Food Agency and supported by the US Agency for International Development (USAID) agricultural program, which was attended by Georgian scientists and leading entomologists from the US.

According to Bill Lingren, the president of Trece Inc., the successful experience of fighting the Asian Brown Marmorated Stink Bug and the established systematic approach will significantly help Georgia in the fight against other pests.

For more information on the topic, see previous articles by the “Myth Detector:”