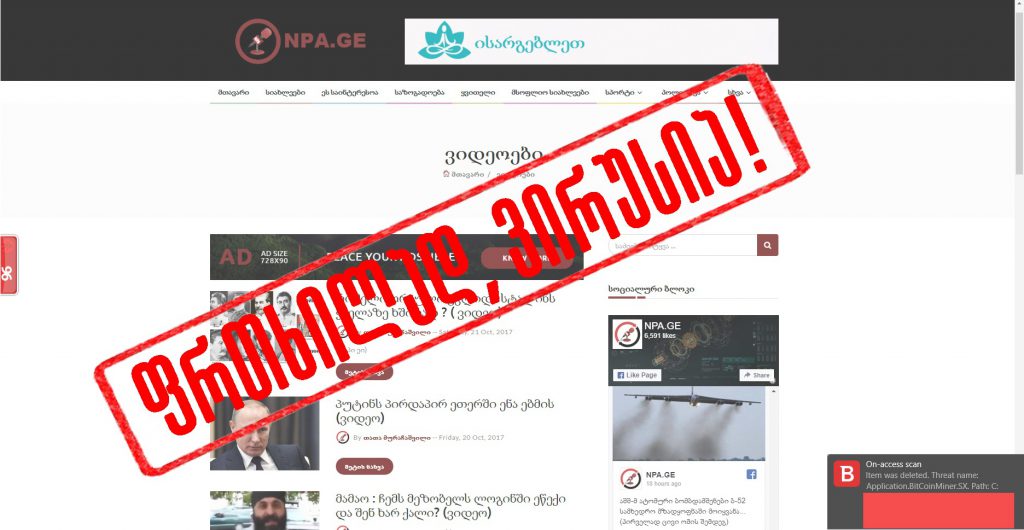 As of October 23, 2017, antivirus programs identify a viral program Application.BitCoinMiner.SX on a Georgian tabloid, npa.ge. The viral program was unauthorizedly using the power of the guest computers with the aim of earning cryptocurrency. Myth Detector calls internet users for caution and advises them to visit the given website only provided the antivirus programs and browser extensions are enabled.

1. Installation of Application.BitCoinMiner.SX on the guest computer is an unauthorized access to the private property 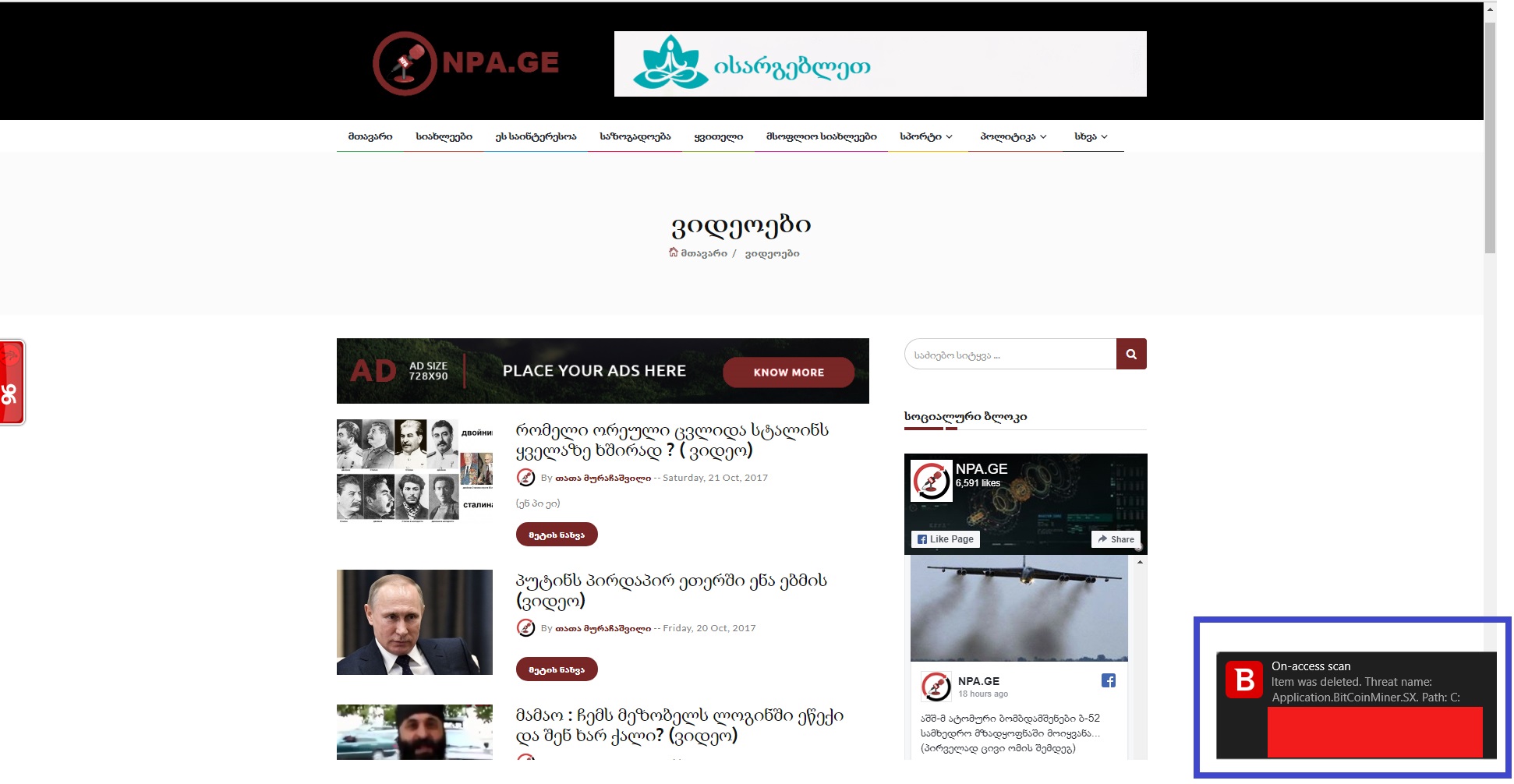 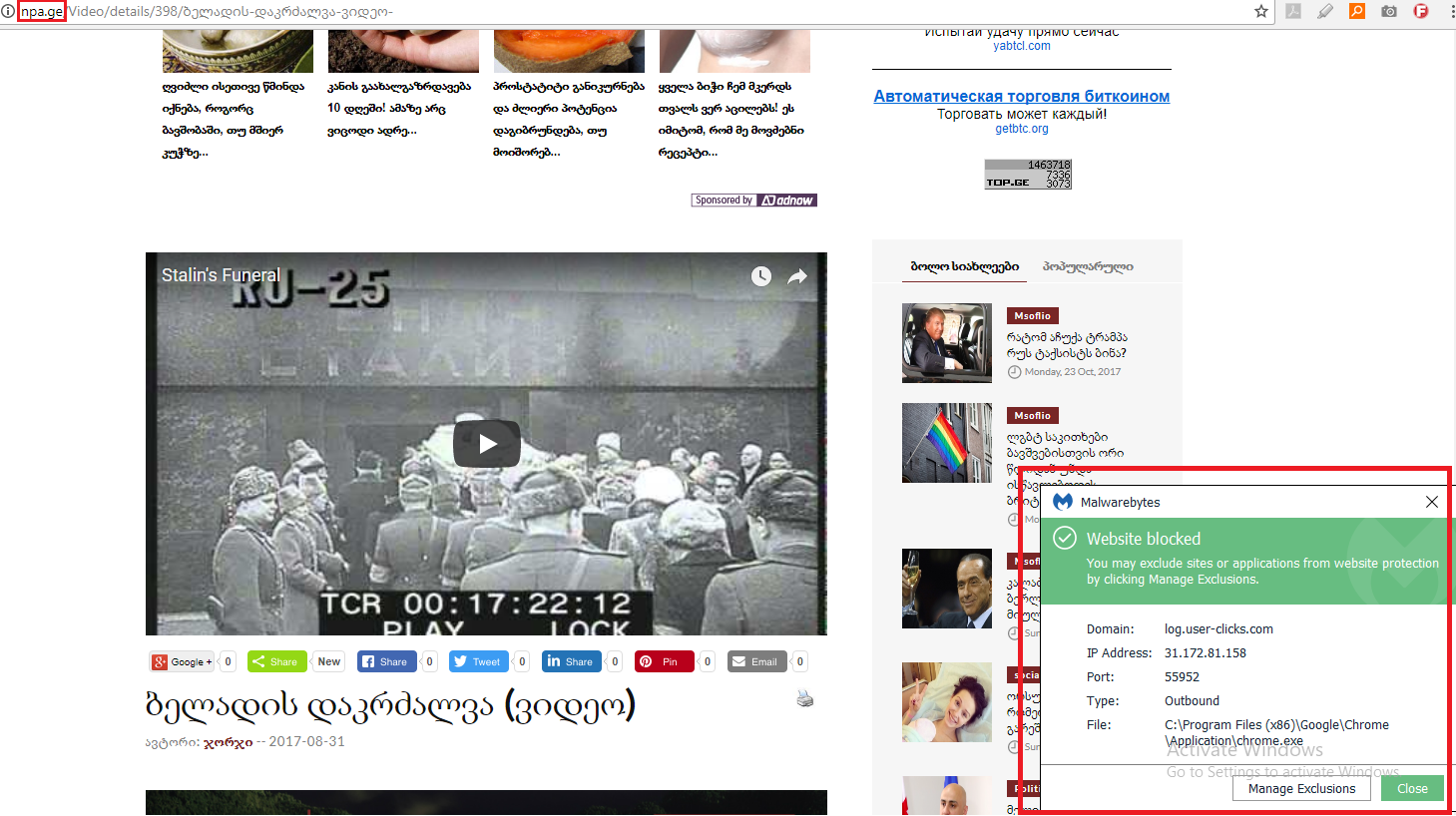 As the guest was entering npa.ge, the virus was accessing the temporary files directory in the guest computer, was activating itself and was beginning to use processor power to earn the virtual currency, even if the user closed the internet browser. According to www.f-secure.com, an authoritative website which is a database of viral programs, the given program is considered as a potential malware which earns cryptocurrency for the planter of the virus by exploiting processor power. In this way, the author profits financially. Such act is an unauthorized access of private property.

2. The given viral program is mostly used to earn Monero cryptocurrency.

MONERO is popular in the sense that it maintains maximal anonymity of both the payer and the receiver. Namely, Blockchain system cannot identify the payer and the receiver of the cryptocurrency, therefore, the given currency is more often used to implement transactions necessary for illegal activities, such as drug trade, internet piracy, theft of credit card information etc. Bitcoin warns users about the mining with Monero’s viral program, too. 3. There is no norm concerning the cryptocurrency mining in the Georgian legislation.

Myth Detector contacted the Data Exchange Agency at the Ministry of Justice concerning the given issue and asked for explanations about the risks associated with the work principle of web mining.

Davit Kvatadze, the CERT Manager of the Agency, noted in the conversation with us that web-mining is a new, popular way for hackers to access the power of other computers. He also added that there is no norm in the Georgian legislation that would regulate various forms of mining.

Myth Detector Lab advises users to use Mawarebytes and Bitdefender antiviruses with the aim of prevention. The given programs are able to identify and neutralize the given virus. The security level will also increase if the internet users install in their browsers the programs that block web-mining. Google Chrome users can resort to AntiMiner, NoCoin, ADblock, ADguard, while Mozilla Firefox users can go with NoScript.