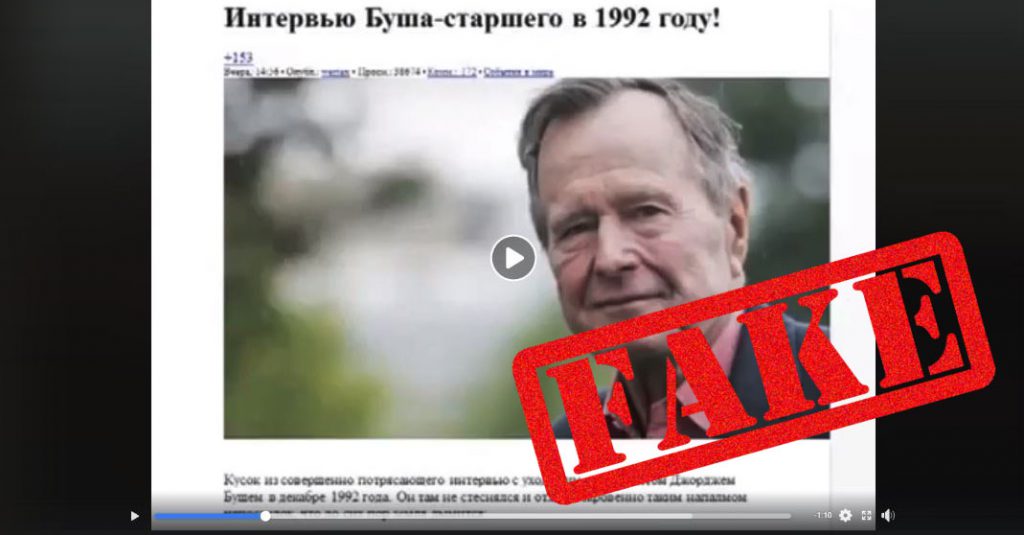 The story about George Bush the Elder allegedly regretting the dissolution of the Soviet Union in the interview with The New York Times is fake and it went viral on Russian websites. The fake story provides two dates of the interview – October 21, 1992 and December 1992. Actually, according to The New York Times archival data, no similar interview with George Bush the Elder can be searched in the October 21, 1992 issue.

At one point, the video shows an article with a title “The Interview with Bush the Elder in 1992” as well as the photo of the former U.S. President. It is, however, impossible to identify the source, but tens of materials can be found on Russian-language websites, forums, blogs and social network Odnoklassniki with the same title. Videos with similar content are also posted on YouTube. The video posted on Facebook provides only the name of the newspaper The New York Times as its primary source, but the materials posted on various websites simultaneously provide the dates, when the newspaper was issued that enables us to recheck the information.

For example, the October 21 issue of The New York Times is referred to as the primary source by the end of the article posted on Russian social network МирТесен and website Politikus.ru. However, at the beginning, the both articles refer to the December 1992 interview with George Bush the Elder as the source. So, there is a two month discrepancy between the dates mentioned at the beginning and at the end of the article.

Photo: The material posted on Politikus.ru on March 16

Noteworthy that the October 21, 1992 interview with George Bush the Elder where he talks about the dissolution of the Soviet Union cannot be found in The New York Times archives (see contents).

Besides The New York Times paid archives, the newspaper website provides the text of Bush’s address to nation on Soviet leader, Mikhail Gorbachev’s resignation, where the former U.S. President talks about the dissolution of the Soviet Union. He says that dissolution of the Soviet Union is one of the greatest dramas of the twentieth century – the historic and revolutionary transformation of a totalitarian dictatorship, the Soviet Union, and the liberation of its peoples. He believes that this is a victory for democracy and freedom and that every American can take pride in this victory.