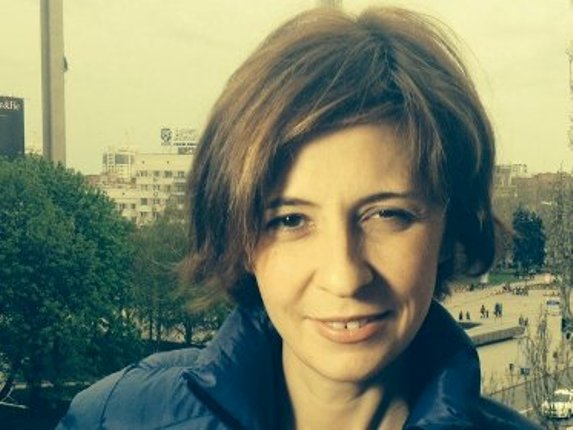 In April 2005, soon after Vladimir Putin stated on national television that the destruction of the USSR was “the greatest geopolitical catastrophe on the 20thcentury, he set up a television station that would convince the world that he was right. In the last ten years, Russia Today, now called RT, has turned from an amateur channel into a sophisticated, slick network with $300 USD million budget, offices around the world and English, Spanish and Arabic channels working to tell its growing audience about imminent the evils of Western liberalism.

Today, RT is only a part of a massive Kremlin-run propaganda machine which is made up ofdozens of television stations, the newly launched Sputnik agency and hundreds of paid trolls [1] working on setting the tone of discussion on social meda channels. Recently, some have questioned success of Russia’s multi-million dollar propaganda effort when a new global poll from Pew Center found that Russia “earned the lowest approval ratings globally for the eighth consecutive year and posted the highest disapproval ratings it has received to date.”

But in Russia and across the former Soviet Union Kremlin’s strategy has succeeded in changing political discourse and turning large portions of the populations against the West. Numerous polls show that public disapproval of U.S. and EU leadership has doubled over the last year, not only in Russia but also in Central Asia. “Kazakhstan, Belarus, Kyrgyzstan and Tajikistan all reported the highest disapproval ratings for the U.S., the EU and Germany in 2014 than at any previous point in the past that Gallup has measured,” according to a recent Gallup poll. There has been an extraordinary rise of anti-Western sentiment in traditionally pro-Western Georgia. In a country where only a small portion of the population watch Russian networks, there has been a rise of Georgian-language media outlets that repeat many of the same myths created by Russian television. A recently study by Tbilisi-based Media Development Fund found that “a dominant topic” in anti-Western media outlets was “legalization” of homosexualitypedophilia and perverse mode of life by the West”. Many portrayed the West as “a fighter against Orthodox Christianity” and traditional values.

None of these myths are fact-based. The same way that most analysts agree that since annexation of Crimea Kremlin has left the realm of domestic and international law, the Russian television seems to have left the realm of journalism. In order to get the Kremlin’s anti-Western, anti-liberal message across, Russian networks have relied largely on one simple, yet seemingly effective method: lies.

Ukraine has paid, and is still paying, the heaviest price for these lies. Myths created by Kremlin’s slick, multi-billion dollar propaganda machine has been, arguably, more effective at propelling the conflict in Ukraine than any military assistance that Moscow has provided to its supporters in Crimea or separatists in Eastern Ukraine. These myths follow a simple narrative: Russian-speaking people of Ukraine are under threat from the government in Kiev which is made up, for most part, of US and EU-backed neo-nazis attempting to undermine Slavic traditions and identity (Putin himself, whom Russian media portrays as the guardian of traditionalism around the world, has even compared struggle for Donetsk with the siege of Leningrad in World War II). This narrative is repeated again and again across the Russian media, not only in news bulletins but also in popular talk shows and documentaries watched by millions of people across the former Soviet Union. The reports are especially powerful because they never seem to impart a certain point of view, rather they are constructed in a way that forces viewers to make a noble moral choice between good and evil.

The effect of the Russia’s highly emotive coverage of the conflict has been astonishing. From my own experiences of reporting for the BBC from Eastern Ukraine, many people genuinely believe that Ukrainian government is going to annihilate the Russian-speaking population and force people into homosexual marriages. Absurd as this may sound, the sentiment has driven many to join anti-Kiev protests that eventually led to the war in the East. The war itself gave birth to a new set of lies, and while they undoubtedly exist on both sides of the conflict Ukraine’s erratic propaganda effort simply cannot compete with Russia’s wealthy, well-organised disinformation machine.

For journalists outside this machine covering this war in the East often feels like living in a maddening parallel world where reports broadcast on television simply do not match reality on the ground. The more primitive the lies are, the more effective they seem to be. One of the particularly notorious examples was a report broadcast on Russia’s Channel One in which a woman told how a little boy from Slaviansk was crucified by Ukrainian soldiers. “They took the child of three years, the little boy in shorts, in a t-shirt and crucified him as Jesus on a bulletin board. And then they took his mother, bound her to the tank and carried her out for three circles on the square,” she said. Channel One eventually admitted that journalists had no proof that the story was true, but never apologised or officially withdrew the report. Most people who watched the story never found out that it was fake; the hatred that the report had stirred did not dissipate.

On a recent trip to Eastern Ukraine in April 2015 for the BBC, I overheard two women speaking in a shop about death of a ten year old girl in Ukrainian shelling of Donetsk. They were horrified by the death, and referred to the government in Kiev as “Nazi Junta”. Indeed it turned out that all main Russian networks, which also often refer to the Kiev government as “Nazi Junta” had broadcast the story about the girl. My team tracked down the original source of reports: spokesman for the so called Defense Ministry of self-declared People’s Republic of Donetsk, Eduard Basurin, who confirmed that a child has been killed but refused to give details. We subsequently fact checked the story by going to everyone who could have had information about the child until we finally spoke to Russian tv reporters who told us, on camera, that the child never existed and that they reported the story because “they had to”.

What is extraordinary is that every day life in Donetsk is full of real horrors and real children have died in the war, and yet it is the lies broadcast on Russian television that seem to fuel much of the hatred driving the conflict.

By legitimising the act of lying in its own coverage Russian networks also successfully turned fundamental values of journalism like balance and fair reporting on their head, creating unprecedented challenges for the media professionals working outside the Kremlin propaganda machine. There is increasingly an understanding among Western journalists that it is impossible to cover the war in Eastern Ukraine without covering the propaganda which drives it, but it is one thing to cover a conflict without taking sides and entirely another to cover an information war without becoming the propagandist yourself. Echoing this dilemma is the one facing the Western political establishment: how do you stand up to those who abuse free speech without becoming an abuser yourself?

Answers to these questions are unlikely to come from Russia, which is considered to be one of the most dangerous countries to be a journalist. Since Vladimir Putin came back to power as president in 2012 already restricted media freedom deteriorated further.Physical safety has been an issue,murders of journalists have been a regular occurrence in Russia (according to Committee to Protect Journalists 59 have been killed since 1991) and the few remaining independent journalists who dare to criticize the government are constantly harassed by the authorities through the country’s corrupt and politicized court system.

But as the Kremlin propaganda machine threatens security of those outside Russia, more and more people are searching for solutions. Some advocate creation of counter-propaganda channels, but in the world where media is already highly polarised this is likely to have a devastating effect on journalism.

So far it seems that the most effective way of countering lies of Kremlin-backed channels is by doing hard-nosed, on the ground investigative reporting which busts myths presented by the Russian channels. Sadly, this is precisely the sort of journalism that Western mainstream media, with its ever shrinking budgets and resource crunch, can no longer afford. Much of the coverage of the war in Ukraine has simply boiled down to reporters presenting both sides of the story, and by doing so unintentionally reinforcing Kremlin’s agenda. For example, in the beginning of the Crimea annexation, many Western outlets labelled the Russian troops in the Peninsula as “little green men”, passively accepting that the origin of the troops was in doubt and that Moscow’s claim that those were not Russian soldiers was, somewhat at least, legitimate. Another example is the ongoing use of the term “separatist” by the Western media, which obscures the nature of the war in which a bulk of the fighting force comes from Russia and instead reinforces the Kremlin’s construction of events which describes the war as a conflict between Kiev and a group of homegrown rebels.

The Western media reports that have stood out are those that have caught Kremlin red handed through thorough, on the ground, fact-based reportage. Examples include Vice News report on “Selfie Soldiers” which traced origins of a particular Russian fighter in Eastern Ukraine back to its military base in Russia. Billingcat, a website run by British journalist Elliot Higgins, has been successfully using open source information to reconstruct facts on the ground and bust myths created by the Russian television. And, perhaps the most notable example of all is StopFake, a web-site set up by journalists and academics in Kiev who fact check information presented in Russian media outlets (StopFake also checks, and corrects Ukrainian media and politicians). Since it was set up in June 2014, StopFaked has debunked misattributed photos and videos, invented news and rumours from social media. Within three months from the launch, StopFake had the audience of over 1.5 million unique visitors a month, and about one quarter of the readership as well as many donations for running the web-site are coming from Russia. Popularity of StopFake shows that there is a real hunger for alternatives to Russian television and a real need for journalists who will go out of their way to debunk myths created by the Kremlin.