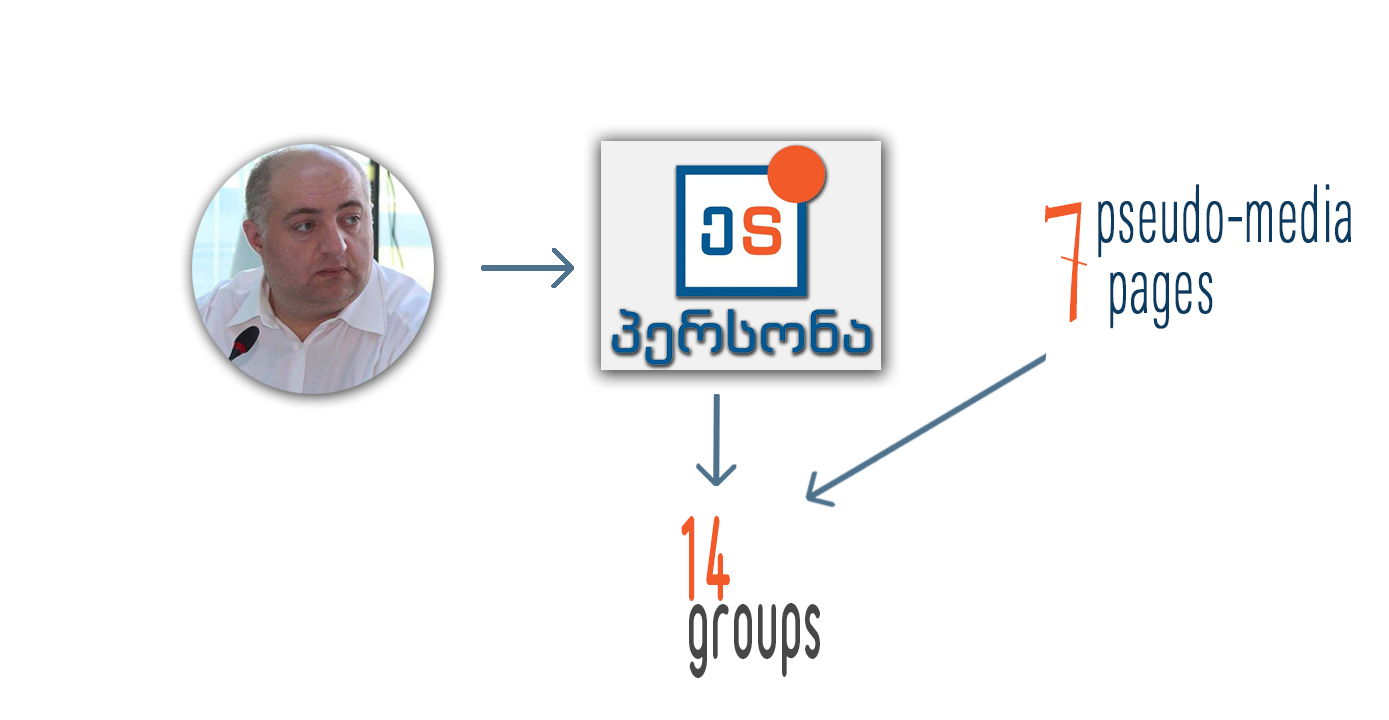 Update: In May 2020, Facebook deleted pages, groups and profiles linked to Koka Kandiashvili and his media Espersona for engaging in inauthentic coordinated behaviour. Facebook clarified that the identification of this network became possible after reports from the local fact-checking organisation.

The Myth Detector has revealed a scheme through the open sources, showing how Espersona, an online edition created by Georgian Dream’s PR technologist Koka Kandiashvili, administers Facebook groups and pages involved in the campaign of discrediting the government’s opponents, critical media and other actors.

Which groups are administered by Espersona?

Espersona’s Facebook page administers at least 14 groups (incomplete list) in social media, among them a Facebook group “ბიძინა ივანიშვილი ჩემი თანამოქალაქეა!” (Bidzina Ivanishvili – My Fellow Citizen). One of the group admins is Natia Beridze, who worked as a journalist for Espersona created by Koka Kandiashvili and quit the editorial board on December 20, the day when Facebook imposed sanctions on the pages affiliated with Georgian Dream. Natia Beridze was also featuring in the story on government trolls prepared by Mtavari TV. 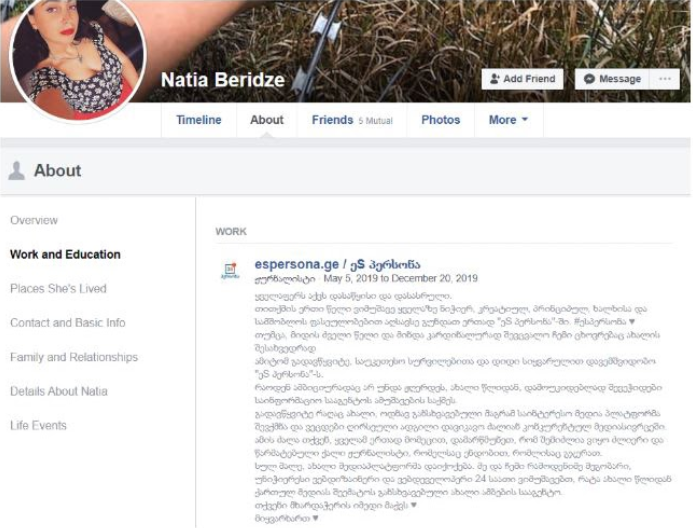 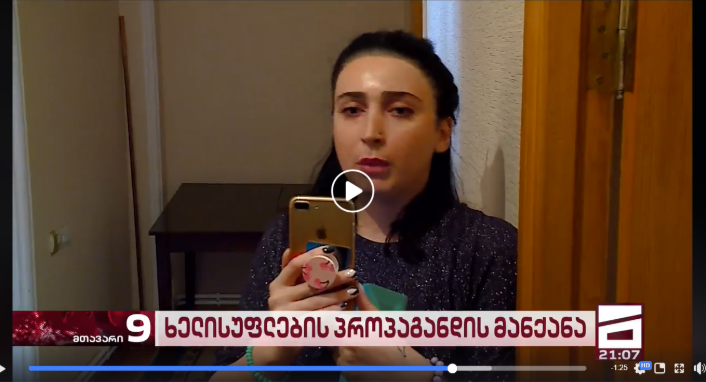 Besides “Bidzina Ivanishvili – My Fellow Citizen,” Espersona administers at least 13 other groups. These 14 groups have absolutely different content and are targeting the audiences with different interests.

Who administers the group “Bidzina Ivanishvili – My Fellow Citizen?” 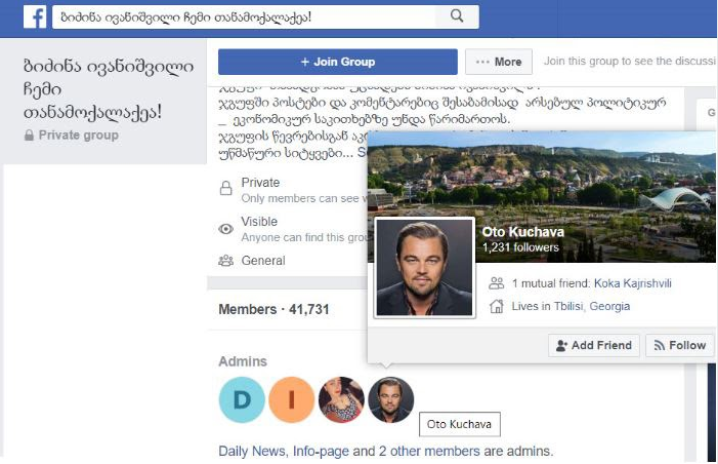 Troll Oto Kuchava with Leonardo DiCaprio’s image uploaded as a profile picture administers all the fourteen above-mentioned groups. In two (Love, Youth) out of 14 groups, another troll Liza Didiberi was also identified, who steals a model’s photos uploaded from the Internet. 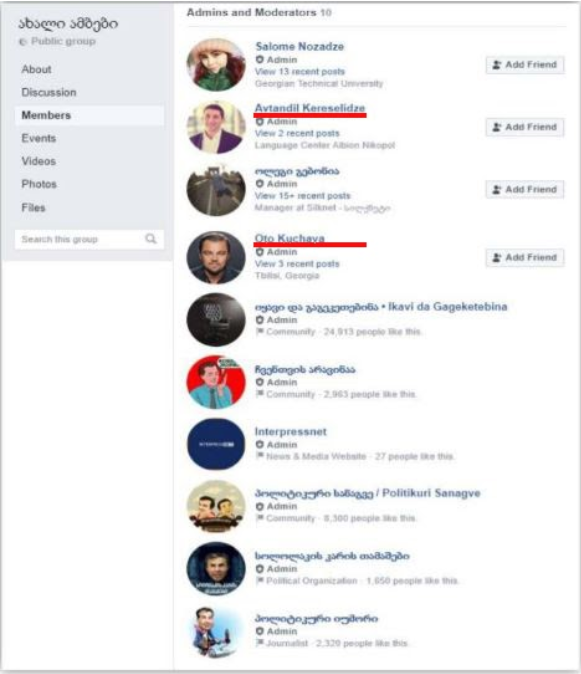 Seven pseudo-media pages were identified that administer 13 pages along with Espersona. All the seven pages were created in a period between October and December 2019. Six out of seven pages note “Journalist” in their description section and one page named “News” describes itself as “Personal blog.” These pages do not post information on their own pages; neither do they indicate their URLs; however, they are quite active in the groups administered by Espersona. The analysis of the groups administered by these pages has revealed other groups administered by the profiles or pages affiliated with Espersona’s groups. Considering their names, these pages are positioning themselves as media outlets, but actually, they are operating with hidden identities and do not create any media content. 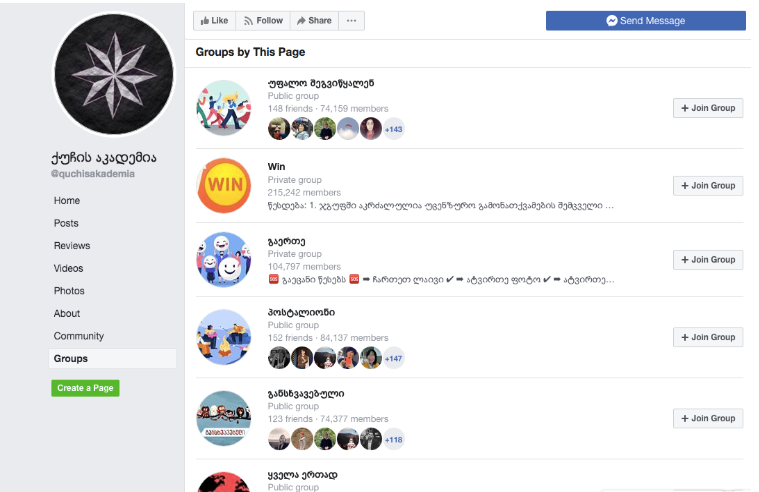 Activities of the pages administered by Espersona

9 of identified 14 groups are public and 5 groups are private. The analysis of public groups shows that the following groups have been most active over the past year:  მსოფლიო ამბები (World News), გაიხალისე ცხოვრება (Make your life positive), ბედნიერი საზოგადოება (Happy society) and ჩვენ გვიხარია ცხოვრება (We are happy to live). 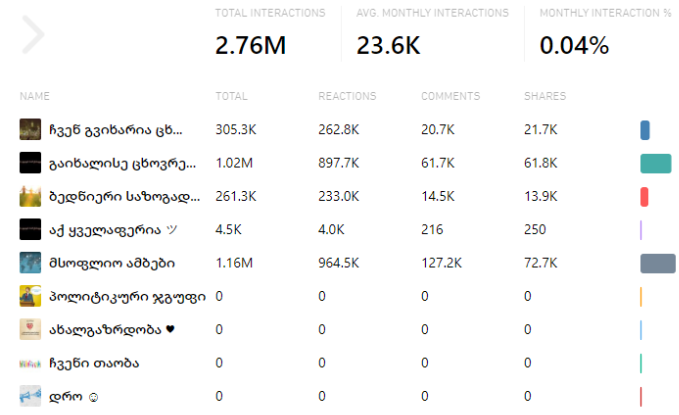 According to the interactive analysis, these groups were most active in May and October 2019. 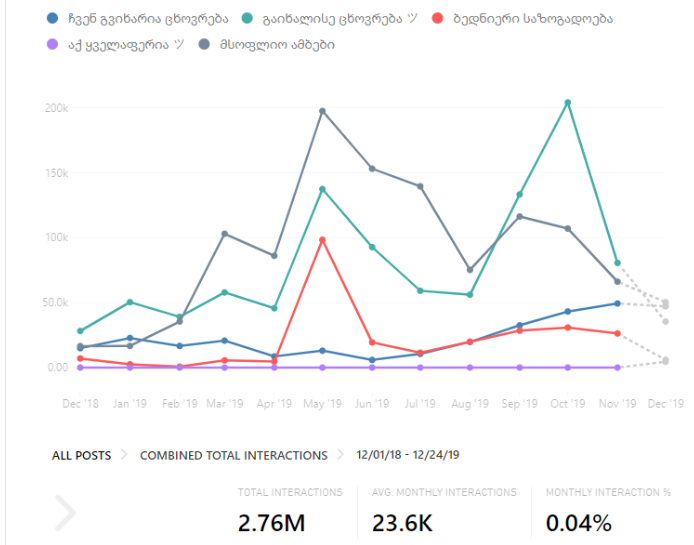 The groups administered by Espersona spread mixed-type information. Along with entertaining and religious information, the groups spread the links of Espersona’s news stories, political content as well as information supporting Georgian Dream and Bidzina Ivanishvili. Leila Tsinadze-Melikidze, Georgian Dream’s supporter, is quite active in these groups. She has been implicated in spreading fake news and discrediting opponents. She has also spread fake information about Eka Gigauri, head of Transparency International – Georgia, in the group “Kakha Kaladze Tbilisi Mayor.”