How does UK’s Yellow Card Scheme Work and How Reliable are Vaccination Data? 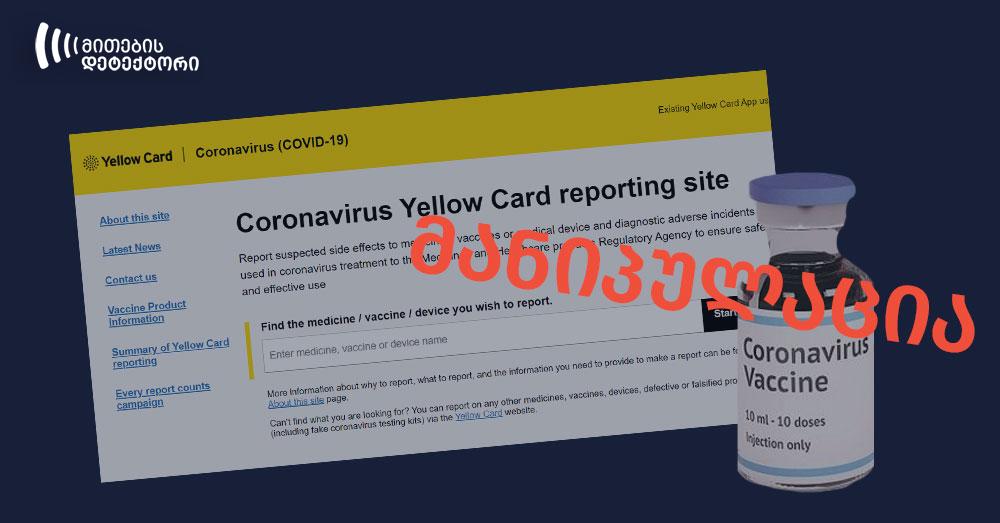 On March 30, Nona Agdgomelashvili, a Georgian therapist, published a post, according to which in a period between 9 December 2020 and 14 March 2021, 594 people died and 404,525 suffered injuries in the UK after receiving Pfizer and AstraZeneca COVID-19 experimental vaccines. Earlier on March 29, Facebook user Nana Akhalkatsi also spread identical information, claiming that as of March 4, 212 people died and a number of side effects were reported in the UK following use of Pfizer vaccine. The information leaves an impression that these are official data released by the UK Government. 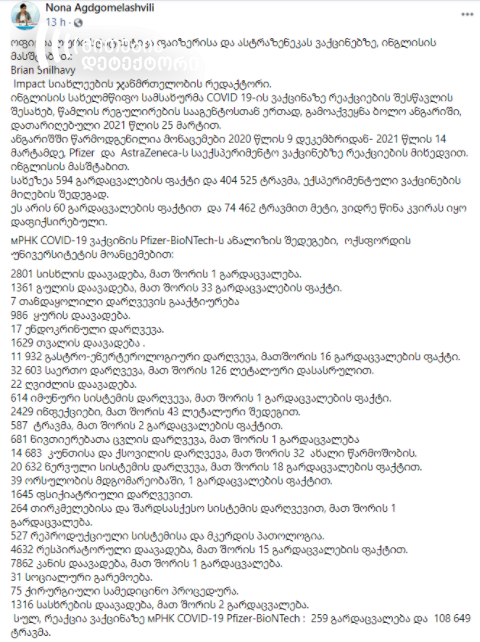 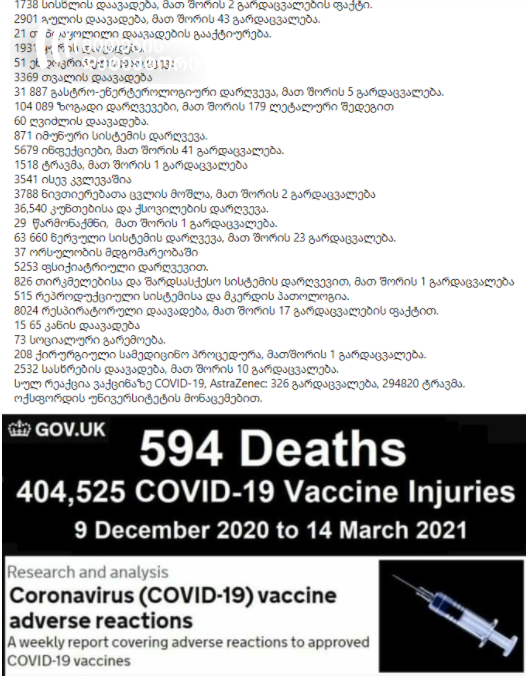 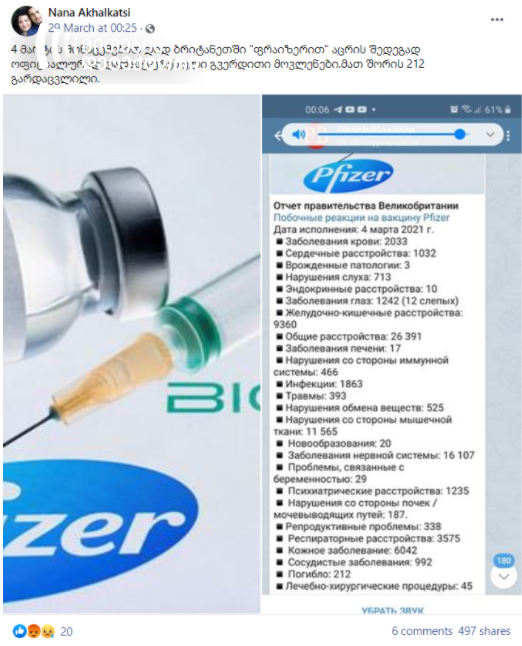 The information about deaths following vaccination in the UK is manipulative, because UK’s Yellow Card scheme is the system for collecting and monitoring information on side effects or adverse incidents and it mainly relies on voluntary reporting from medics and members of the public. The reports may reflect any health-related problems that occur after vaccination regardless of whether this problem was caused by vaccination.

What does the Yellow Card scheme mean?

The Yellow Card scheme is the UK system for collecting and monitoring information on safety concerns such as suspected side effects or adverse incidents involving medicines and medical devices and it is run by the Medicines and Healthcare products Regulatory Agency (MHRA). One of the purposes of the scheme is to identify post-vaccination side effects; however, it may be an adverse incident that occurs after a vaccination and this does not mean that it was caused by a vaccination. Both vaccinated patients and other interested persons can submit suspected side effects through the Yellow Card scheme, regardless of whether they have any medical education. It is incorrect to use the Yellow Card data to evaluate post-vaccination deaths, because the scheme does not independently confirm whether any vaccine has caused a patient’s death. The reports about side effects are assessed by a team of medicine safety experts made up of doctors, pharmacists and scientists who study the benefits and risks of medicines in partnership with the independent Commission on Human Medicines (CHM).

The Yellow Card scheme operates like the U.S. Vaccine Adverse Event Reporting System (VAERS) about which Myth Detector wrote in its earlier articles:
What is VAERS and What do We Know about COVID-19 Vaccination in the U.S?

According to the report posted on the UK Government’s website, 10.9 million doses of Pfizer vaccines and 13.7 million doses of AstraZeneca vaccines were administered in a period between 9 December 2020 and 14 March 2021. UK’s Medicines and Healthcare products Regulatory Agency (MHRA) received 38,084 reports of suspected side effects for the Pfizer vaccine and 78,223 reports for the AstraZeneca vaccine. The brand of 325 vaccines was not specified. For both vaccines, the overwhelming majority of reports relate to injection-site reactions (sore arm for example) and generalized symptoms such as ‘flu-like’ illness, headache, chills, fatigue (tiredness), nausea (feeling sick), fever, dizziness, weakness, aching muscles, and rapid heartbeat. These types of reactions reflect the normal immune response triggered by the body to the vaccines.

As for deaths, the MHRA has received a total of 594 reports of deaths following vaccination. According to the analysis of data released by the MHRA, review of individual reports and patterns of reporting does not suggest the vaccine played a role in the death. It is noteworthy that the majority of these reports were in elderly people or people with underlying illness. According to MHRA’s report, high proportion of people vaccinated in the vaccination campaign so far are very elderly, many of whom will also have pre-existing medical conditions. “Older age and chronic underlying illnesses make it more likely that coincidental adverse events will occur,” reads the report.