How does Kremlin Propaganda Fabricate the Covers of Western Outlets to Discredit Ukraine? 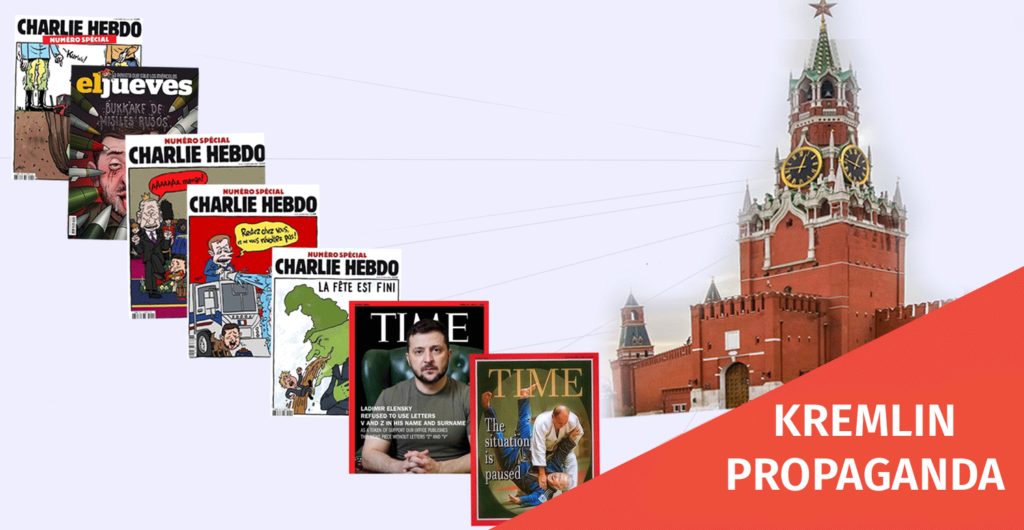 After the launch of Russia’s full-scale war in Ukraine on February 24th, 2022, one of the most widespread methods of Kremlin propaganda was to fabricate the covers of prominent Western publications. This type of false imagery aimed to create the impression as if the well-known magazines mock and ridicule the President of Ukraine, Volodymyr Zelenskyy and other Western leaders and recognize the weakness of Europe and the United States against the background of Russia’s military might.

The software-edited cover photos were mainly distributed by Facebook profiles; however, in selected cases, fake photos were distributed among the Russian-language media outlets, as well as among the Facebook pages of the leaders and party of the Georgian pro-Kremlin Alt-Info/Conservative Movement.

The photo of the President of Ukraine on the fabricated cover of TIME magazine was accompanied by the inscription “LADIMIR ELENSKI” and the claim that Zelenskyy refused to use the letters V and Z in his first and last name. This assertion is in response to a law passed by the Rada of Ukraine, which prohibits the use of these two symbols in information and public space, as they have become a symbol of the invasion of the Russian army in Ukraine. The cover intended to portray Zelenskyy as a comical, frivolous figure.

The photo that was attributed to the Spanish publication EL JUEVES, showed Zelenskyy’s deformed face and rockets. The photo concerned the missile attacks carried out by Russia on Ukrainian cities in October and aimed to show the weakness of Ukraine and Zelenskyy as a leader.

Another fabricated cover of “Charlie Hebdo” was aimed to demonstrate the weakness of Ukraine. It depicted the location of Kyiv with the inscription, “And here we go to the dark side”. The cover is linked to the temporary interruption of electricity supply in the capital of Ukraine, which was the result of Russian attacks on the Ukrainian energy infrastructure. This cover, like the photo published by El Jueves, alludes to Ukraine’s failure in the war.

Three different fabricated caricatures of “Charlie Hebdo” feature a zoomorphic image of Zelenskyy; in particular, the president of Ukraine is depicted in the form of a dog. In one case, Zelenskyy is standing next to a map of Great Britain and holding the severed hand of an Azov soldier in his mouth, in another caricature, he is eating dog food in front of Emmanuel Macron’s car; and in the third case, the President of Ukraine is sitting at the feet of King Charles III in front of the body of Queen Elizabeth II. The purpose of the caricatures is to portray Zelensky as a subservient figure to Britain and France.

Along with Zelenskyy, the fabricated covers aimed to discredit other Western leaders. In the fabricated Charlie Hebdo caricature of Zelenskyy holding the severed hand of an Azov soldier, Britain is depicted in green, shaped like a man with who is vomiting. In the photo, along with the brown mass, the former British Prime Minister Boris Johnson can be observed. In addition to Johnson, King Charles III was also featured on the fabricated cover of “Charlie Hebdo”. In this case, the authors of the caricature ridiculed the mistake (Queer Elisabeth) made by the Ukrainian Embassy in Britain.

The fabricated cover of “Charlie Hebdo,” where Zelenskyy is seen eating from a plate decorated with the colors of the European Union flag, features the French President Emmanuel Macron, pouring water from a fire truck on the protesting French and calling them to disperse. Protesters answer the president that the water flowing in their houses is colder. The caricature indicates that the French population is dissatisfied with the president because of the increased prices for energy resources.

The fabricated cover of “Charlie Hebdo” was disseminated after the rocket fell on the territory of Poland on November 15th that killed 2 people. Two people are looking at the rocket depicted in the cartoon, which is decorated with the flag of Ukraine. One of them says that this is “Volyn Massacre 2.0”. In connection with the tragedy of the fallen rocket in Volyn, the authors of the caricature try to equate the modern state of Ukraine with the nationalists who killed the Poles in 1943-1945.

For more on the fabricated covers, see our articles:

Demonstrating the Superiority of Russia and President Putin

Some of the fabricated covers are intended to point out and exaggerate the strength of Russian President Vladimir Putin’s and the invincibility of Russia.

On one of the fabricated covers of Time magazine, Putin kicks US President Joe Biden to the ground. On the left side of the photo is the inscription “The situation is paused”. This cover was created before the invasion of Ukraine by Russia, and it was actively distributed even after the emergence of the war. 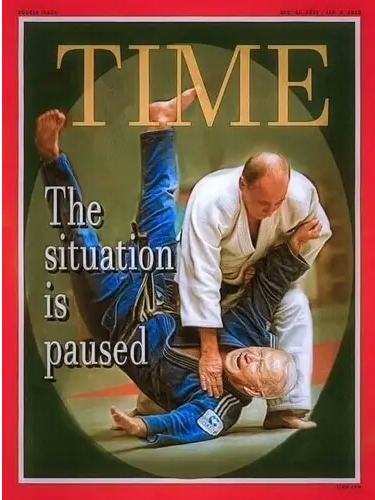 The covers of the aforementioned El Jueves and Charlie Hebdo magazines hinted on the superiority of Russia as well, which featured Russian missiles and Kyiv without electricity.

Read more about the fabricated cover of TIME magazine in the “Myth Detector” article: