How do different vaccines work and does any vaccine pose a threat? 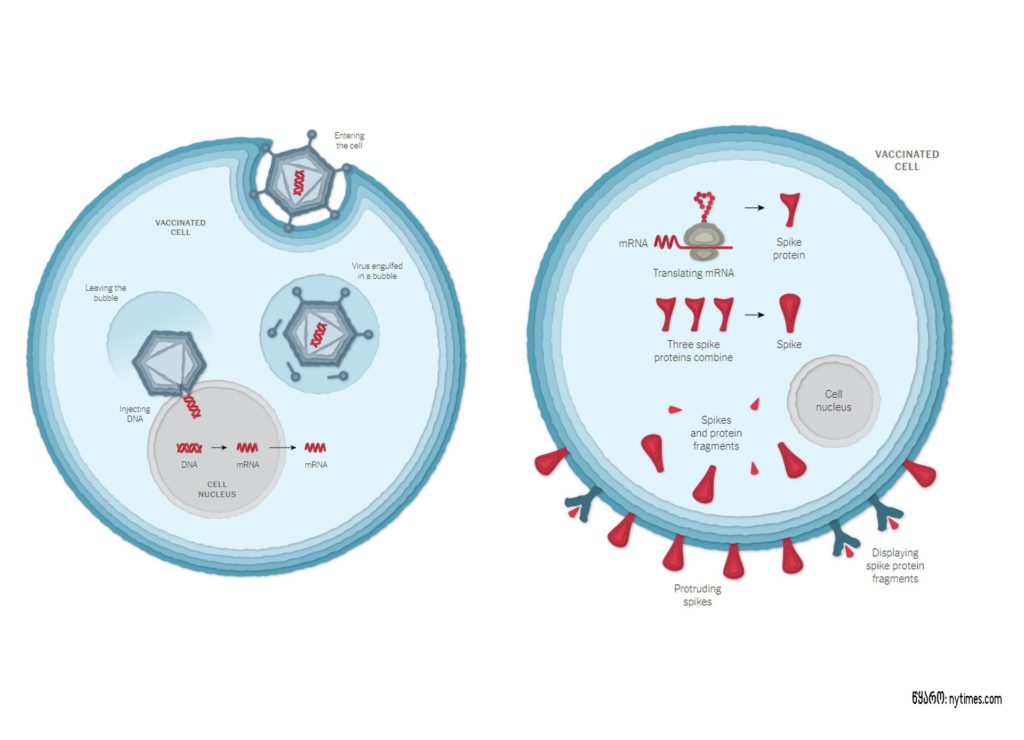 On January 7, Facebook user Eka ShetEkauri published a post in the public group “Let’s defeat the Coronavirus/COVID-19 together”, which, according to the author, presents Greek doctor Dimitri Antoniou’s statements about the COVID-19 vaccine. According to the post, a Greek doctor speaks about halting the coronavirus vaccine in his country and questions its safety. Particularly, he says that the COVID-19 vaccine has not been tested and it is dangerous because it contains an artificial virus and can alter DNA, egg cell, and sperm affecting the fetus. Per the post, the European Commission did not permit the usage of the Pfizer vaccine and European Medical Association doesn’t take any responsibility for the outcomes of this vaccine. The post mentions Pfizer vaccine as a “technical virus” that could kill a human; Russian (implies Sputnik V) and Oxford (implies AstraZeneca) vaccines are considered an ideal model since they do not contain RNA. 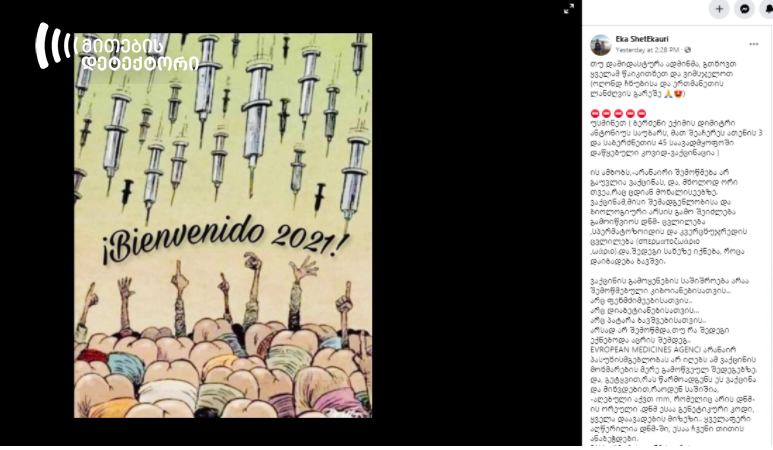 Posts about the dangers of the Pfizer vaccine and the halt of vaccination in Greece contain disinformation: 1. All COVID-19 vaccines in use have passed all necessary phases of testing; 2. European commission and European Medicines Agency granted the Europe-wide recommendation on the use of Moderna and Pfizer vaccines. 3. On one hand, Pfizer/Moderna and on the other hand, AstraZeneca/Sputnik V vaccines have different mechanism of action, however not one contains an artificial virus. 3. Vaccines cannot alter human DNA, egg cells, and sperm. 5. Vaccination process has not been halted in Greece.

1. All COVID-19 vaccines currently in use have passed all necessary phases of testing;

According to the U.S. Center for Disease Control and Prevention, clinical development of the vaccine involves several phases:

Coronavirus vaccines have passed the above-mentioned necessary three-phase process. Vaccines were tested on safety, immune reaction, and final efficiency, and each phase was intended for larger volunteer groups.

American firm Pfizer’s and German manufacturer BioNTech’s vaccines have been tested on 43,500 people in six countries.

As for the Moderna vaccine, it also underwent a 3-phrase testing process, in the framework of which it was tested on 25,654 people including participants aged 45-64 and living with chronic diseases.

Oxford also known as AstraZeneca underwent 3-phase clinical trials. The mentioned vaccine was tested on around 20 00 people in the U.K.

As for the Russian vaccine, there, indeed, have been problems with this vaccine, since it was approved before the Phase 3 clinical trial was complete in Russia.

2. European commission made a decision to use the Pfizer vaccine, and European Medicines Agency granted a recommendation on Europe-wide use of Moderna and Pfizer vaccines.

European Medicines Agency’s (EMA) Committee for Medicinal Products for Human Use (CHMP) rigorously evaluated data on the quality, safety, and efficiency of the vaccine and recommended by consensus a formal conditional marketing authorization by the European Commission. Hence, on December 21, 2020 president of the European commission Ursula Von Der Leyen announced the European commissions’ decision to grant conditional marketing authorization to the vaccine produced by Pfizer.

Since December 21, 2020, the European Medicines Agency has granted permission to use the Pfizer vaccine in people from 16 years of age

On January 6, 2021, EMA recommended the Europe-wide use of vaccine Moderna in people from 18 years of age.

According to the European Medicines Agency, the vaccine meets EU standards and puts in place the controls and obligations to underpin EU-wide vaccination campaigns.

3. On one hand, Pfizer/Moderna and on the other hand, AstraZeneca/Sputnik V vaccines have different mechanism of action, however not one contains an artificial virus

How does Pfizer/Moderna work?

Pfizer and Moderna vaccines have a similar mechanism of action. They do not contain an artificial virus. The vaccine contains messenger RNA (mRNA) inside a lipid (oily) shell. One more difference is that vaccine doesn’t comprise of genetic viral material, but synthetic mRNA that encodes information about particular parts of the virus. 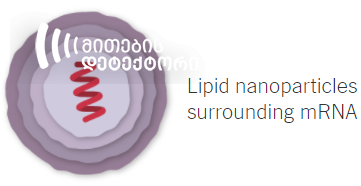 For the human body to fight the virus, it first has to recognize it. In the vaccines developed before, this was done by injecting a weakened part of the virus into the body, through which our immune system would start to recognize the virus and decide on how to handle it without the risk of developing the disease.

The mRNA vaccines bypass the necessity to use the virus or its fragments. To put it simply, mRNA is an instruction-carrier that instructs cells how to build certain proteins or its parts.

Therefore, when the mRNA vaccine enters the cell, it gives instructions on how to synthesize proteins on its surface. This protein is the spike protein of the virus, which is a characteristic of the coronavirus. 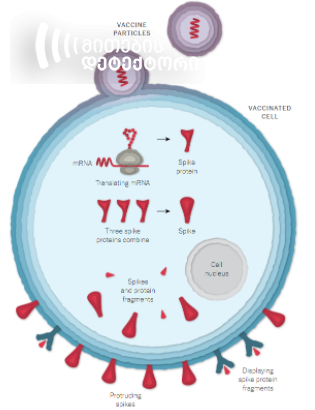 When mRNA enters the cell, the respective protein is built on its membrane, through which the cell alerts the immune system that if a similar protein enters the body, the body should mobilize the defense system to neutralize the virus. That’s why mRNA sends the above-mentioned information to the parts of the cell that produces proteins and disintegrates several hours after fulfilling its function.

Mechanism of action of AstraZeneca and Sputnik V vaccines

In the AstraZeneca vaccine, spike proteins from the surface of the coronavirus are put into other harmless viruses. After the injection, the vaccine enters cells which then start to produce protein similar to the one injected. The body’s immune system reacts to it, produces antibodies, and activates T-cells that can destroy Spike proteins. Therefore, if the coronavirus enters the body of the vaccinated patient, those T-cells will defeat the virus. 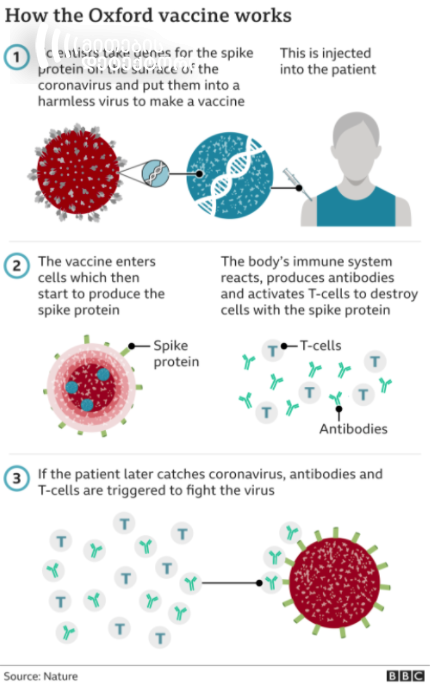 Similar to AstraZeneca, the Sputnik V vaccine starts to work through putting COVID-19 spike protein into the other virus (adenovirus) and entering the body. It reaches the cell nucleus and forces to produce spike protein, afterward, the immune system gets involved and produces antibodies. 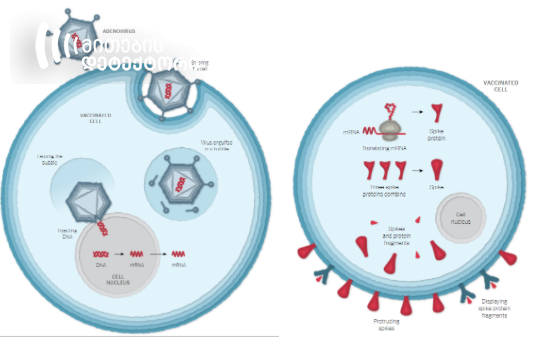 It’s also worth mentioning that according to studies, Pfizer vaccine is 95% effective, Oxford (AstraZeneca) vaccine – 62%, and Russian vaccine – 90% (Albeit, the media questions reliability of the data), but there were differences in the way the trials were carried out to test efficiency, therefore, directly comparing the two results and claiming one’s superiority is incorrect.

4. Pfizer vaccine cannot impact human DNA and fertility, because the vaccine’s mRNA has no contact with the cell nucleus where DNA is stored.

The mRNA vaccines instruct our cells how to build proteins that cause immune response when the virus invades the body. mRNA disintegrates several hours after it fulfills its function, that’s why it cannot reach the cell nucleus, where the genetic material – DNA is stored. It means that mRNA has no contact with DNA and there is no mechanism, which will allow it to alter our DNA. COVID-19 mRNA vaccine simply helps us to develop immunity to fight the disease.

As for the vaccine’s impact on sperm and egg cells, mechanism of action of mRNA vaccine ensures that it has no impact on human reproductive cells.

5. Vaccination process has not been halted or stopped in Greece.

On December 25, 2020, the first batch of Pfizer vaccine arrived in Greece. Greece received 9,750 vaccine doses at the first stage and vaccination roll-out started on December 27. The list of vaccinated people together with medical personnel included Greek Prime Minister Kyriakos Mitsotakis and other politicians and well-known people to support the vaccination process.

Vaccination against COVID-19 is still actively proceeding to this day. On January 8, the Greek Prime Minister stated that the country aims to increase the number of vaccinated people from 5000 to 8000 a day. As of January 8, approximately 26 000 people have already received the vaccine in Greece. 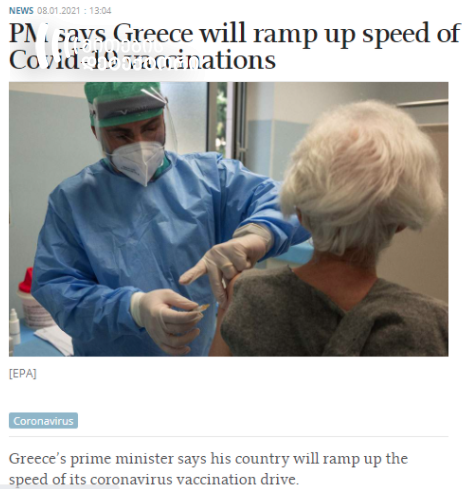 It is worth mentioning that Greek fact-checking organization Elenika Hoaxes also fact-checked Greek doctor Dimitri Antoniou’s statements and assessed it as pseudoscientific and false.