How did the “National Congress. Power to People” Become “Corona Mafia” and who Manipulates Statistics? 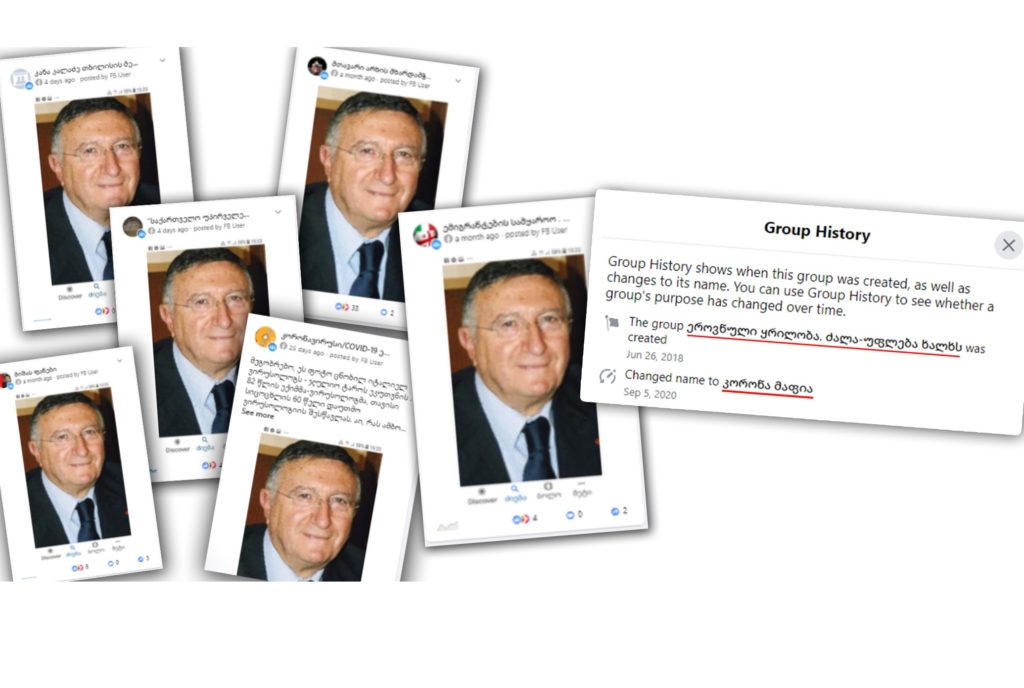 Mano Beridze, a Facebook user, published a post in a Facebook group “კორონა მაფია” (Corona Mafia) – where she is a moderator – citing an Italian virologist Giulio Taro. Taro claims that the number of those who died of COVID-19 is significantly lower than reported in the Italian media. The given post has also been published as a news article by Tvalsazrisi.ge, titled “Scandalous Confession by an Italian Virologist Giulio Taro: Out of the First 1,000 Deaths, reported in the Beginning of the Epidemy, only 18 Died Due to the Virus”. According to Giulio Taro, out of the 3,032 fatal cases, reported as of May 21, only 124 were cause by COVID-19. 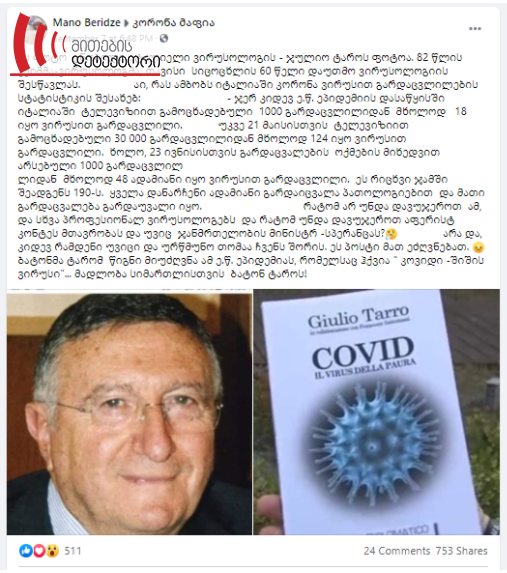 Beridze’s post is based on Taro’s interview published on fondazionenenni.blog on June 18. 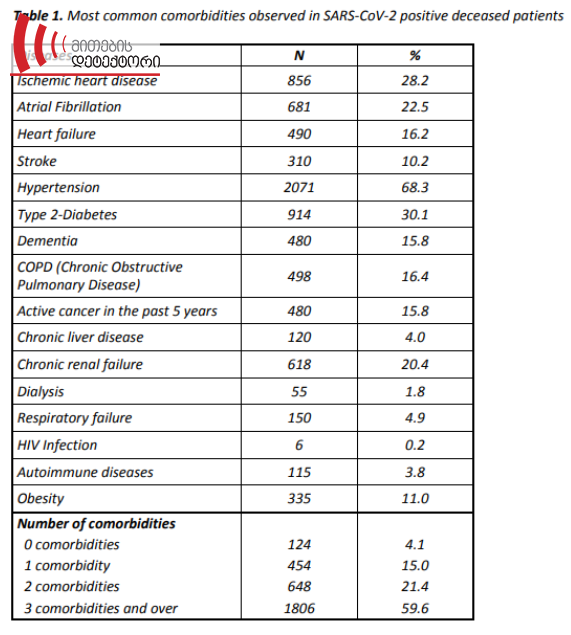 Besides the figures mentioned by Giulio Taro in his interview, Mano Beridze also mentions other figures in her post. She also incorrectly indicated one figure, namely the number of reported fatal cases of COVID-19 in Italy as of May 21 – according to Taro, this was 3,032, while Beridze writes 30,000.

The post had 511 reactions and 753 shares as of September 14. It had been shared in the following Facebook groups: „საქართველო უპირველეს ყოვლისა“ (Georgia first), “კახა კალაძე თბილისის მერი” (Kakha Kaladze the Mayor of Tbilisi), “STOP 5G GEORGIA”. 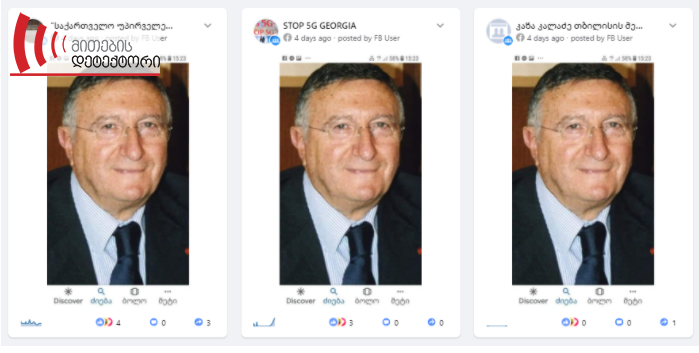 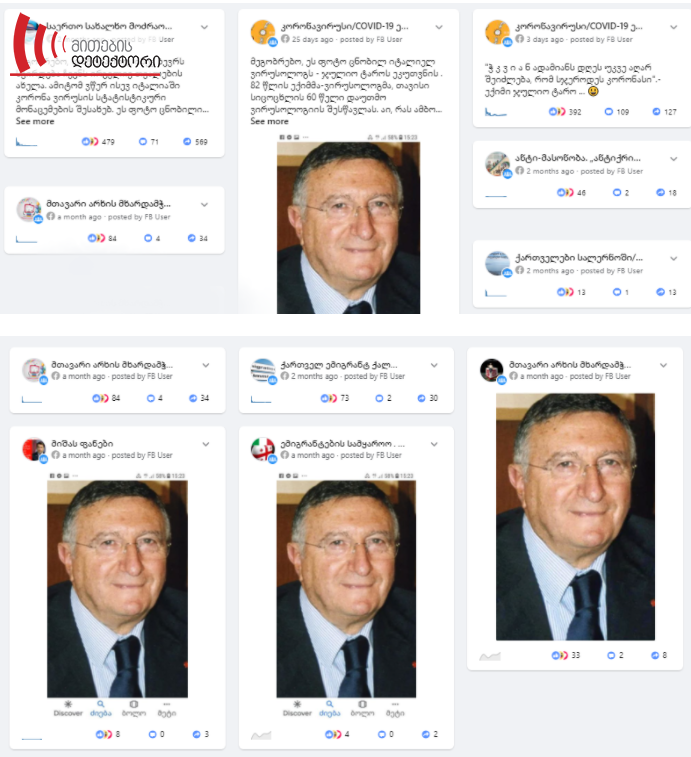 Mano Beridze also published the post on her page on July 21. As of September 14, it had 575 reactions, 264 comments, and 637 shares. The post has been published with identical captions by individual Facebook users, including Nona Qurxuli and Pikria Kuchuxidze, whose posts had 505 and 356 shares, respectively, as of September 14.

Beridze has been actively disseminating in a Facebook group called “კორონა მაფია” (Corona mafia) the opinions of those doctors and virologists who claim that COVID-19 pandemic is exaggerated and the situation is actually significantly milder than reported by media and governments. She has also been actively publishing posts about the conspiracies related to COVID-19, including about 5G and microchips.

Manipulating the COVID-19 figures in Italy

Italian fact-checking webpage Pagella Politica verified a statement by an Italian politician Vittorio Sgarbi that the figures of COVID-19 deaths in Italy are inflated. The article mentions that the figures cited by Sbarbi are real, although they are misinterpreted.

“Less than 4% of the deceased were completely healthy before the coronavirus, so pre-existing diseases are certainly a contributing cause. But it is equally true that without the virus many of those people would not have died… Comparing the total number of deaths in Italy in March 2020 compared to the same month in 2019: there were 65 thousand, this year there were 91 thousand, that is almost 40 percent more: an enormity that makes us understand the impact of the virus in our country“ – the article reads.

Giulio Taro is an Italian virologist that has been frequently criticizing the regulations imposed during the coronavirus pandemic and claims that the figures of virus-related deaths are inflated. Taro recently published a book titled “COVID – The Virus of Fear”. 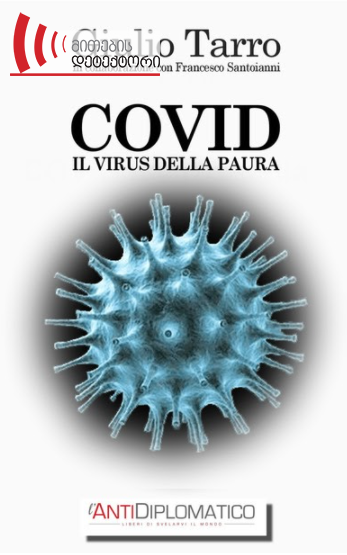 Taro actively criticizes the mandatory requirement of wearing face masks as well. On September 8, he attended a demonstration in Rome, organized by a movement “No to Facemasks”, where people protested against the regulations introduced due to COVID-19.

“Corona mafia” was created on June 26, 2018 and was initially called “ეროვნული ყრილობა. ძალა-უფლება ხალხს” (National Congress. Power to People). The group was renamed on September 5, 2020. As of September 14, there were more than 5,600 members in the group and more than 300 posts are published there on a daily basis.

Mano Beridze, whose coronavirus-related post was published in the group, is one of the moderators of the group. Other moderators include Gadea Gadea Guruli, whose McDonalds-related conspiracy has become a topic of one of Myth Detector’s articles.

The administrator of the group is Lasha Modebadze. He does not have any personal information on his profile and his profile picture makes it impossible to find out whether the profile is real or fake. 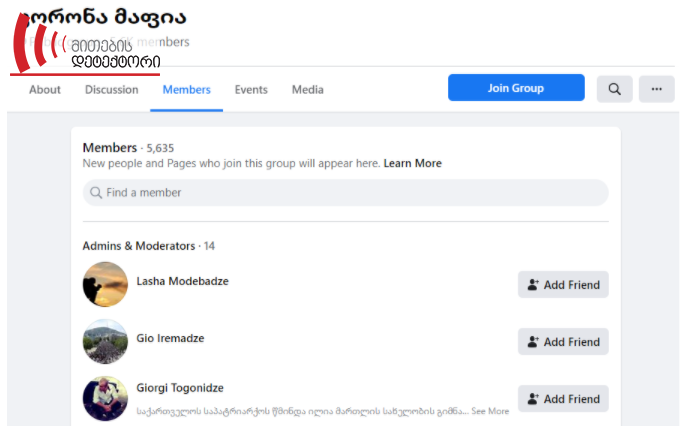 Lasha Modebadze’s account was the administrator of “STOP 5G GEORGIA!!!” as well. The group often saw conspiracies spread about the coronavirus, 5G Internet, and microchips. STOP 5G GEORGIA!!! has been removed from Facebook. 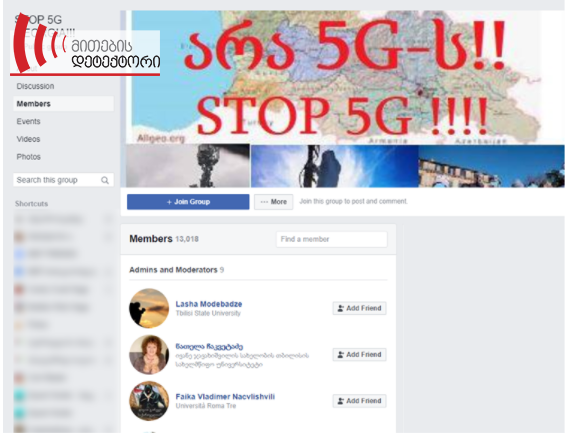