How did the International Sanctions Reflect on Russia? 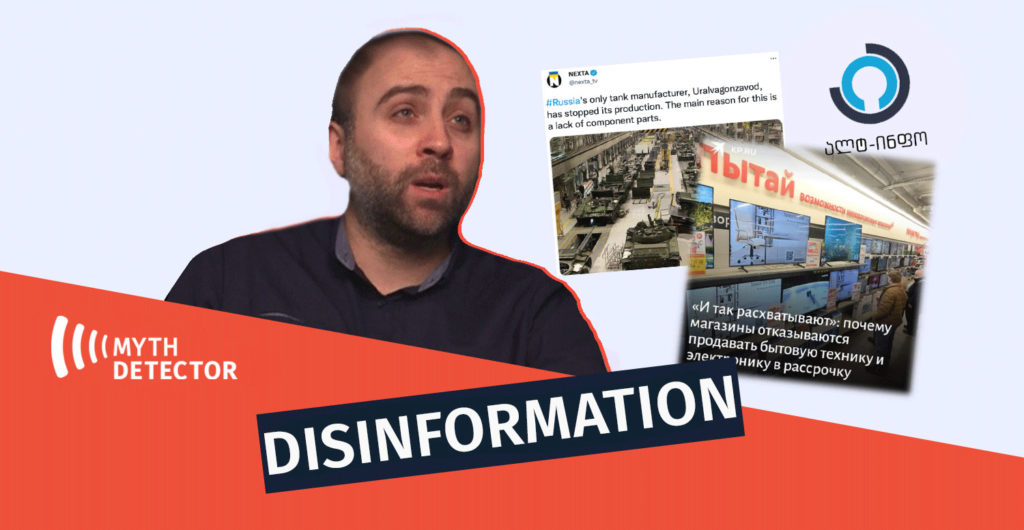 On March 15th, 2022, Shota Martinenko, one of the founders and the host of “Alt-Info,” claimed that despite the sanctions imposed on Russia for its invasion of Ukraine, Russia had not experienced any problems in the areas where its exports are based on. According to Martinenko, Russia is can easily replace the products of companies that have left the Russian market.

Shota Martinenko: “In the areas Russian exports is based on, Russia has not experienced any major problems. Russia’s problem now is McDonald’s, which sell some garbage and sends money in the U.S. Instead of that, people will go to Georgian restaurants or simply create the same products.”

The claim of Shota Martinenko is false. Sanctions imposed by the European Union and the United States and the departure of Western companies by Russia have created various economic problems for the country, ranging from rising inflation to rising unemployment, and the problem cannot be solved by replacing only specific products.

Since Russia declared war on Ukraine, more than 400 Western companies have boycotted Russia and left its market. Those in the boycott represent a variety of fields. Among them are such prominent companies as Amazon, Coca-Cola, McDonald’s, Ford, Boeing, Airbus, Starbucks, Visa, MasterCard, Nike and others.

Since Russia declared war on Ukraine, more than 400 Western companies have boycotted Russia and left its market. Those in the boycott represent a variety of fields. Among them are such prominent companies as Amazon, Coca-Cola, McDonald’s, Ford, Boeing, Airbus, Starbucks, Visa, MasterCard, Nike and others.

Companies that have left or reduced their business activities and projects in Russia or restricted the shipment of their products to Russia:

While It is possible for Russia to replace the products of the companies whose manufacturers have left its market, but this does not change the fact that the boycott of Western companies brings various economic problems to Russia.

Despite Irakli Martinenko’s attempts to reduce the boycott of companies to the claim that Russia will have no economic problems, the economic trends indicate the opposite.

Notably, the already existing Western sanctions and the boycott of companies in Russia pushed inflation to a 24-year maximum (2.22%) over 1 week period. As of March 11th, annual inflation was 12.54%, which is the highest since 2015.

The high inflation has significantly increased the prices of various products in Russia. For example, the price of local cars increased by 17.1%, the cost of imported cars – by 15.2%. The price of smartphones increased by 9.6 per cent. The price of medicines has also increased. The price increase for medicines in the Saratov region was 2.3-6.7%, with local authorities saying they did not expect such a “fatal” increase. Locals also expect tourism and travel costs to increase, and Russia will no longer have the summer and holiday season.

While it is possible for Russian citizens to easily replace products such as food and clothing, the boycott of Visa, MasterCard, American Express and various oil companies is expected to create long-term economic problems for the country. For example, buyers will still be able to use the cards for purchases in Russia until the cards expire. However, overseas Visa, Mastercard or American Express cards will no longer work in Russian stores and ATMs. Customers will also no longer be able to use Russian cards abroad or for international payments online.

In addition to the financial sector, Russia has faced significant problems in terms of technology, as for the most part, it has always been an importer of advanced technologies, and the expected shortage, especially in military equipment, cannot be easily filled with local production. In addition, as already mentioned, the boycott was joined by Airbus, which accounts for 40 per cent of Russian aircraft and carries 41 per cent of passengers.

Also, in terms of technology, Russia will suffer significant losses in the long run due to sanctions on the import of microelectronics. These circuits are used to create a variety of products, including trains, washing machines, tanks, satellites, electric boilers, and more. Notably, Russia will not be able to replace microelectronics with the help of China, because China also has problems in this regard. One of the largest shares of the production of these products comes from Taiwan, which has also joined the sanctions against Russia. According to GLobalData analyst Michal Orme, Russia will be able to get low-end chips from China, but Russia will not be able to import the chips needed for high-end smartphones or advanced equipment.

Due to the lack of mechanical parts, Russia is no longer able to produce tanks. The only tank producer in the country, Uralvagonzavod, stopped working due to a lack of parts. 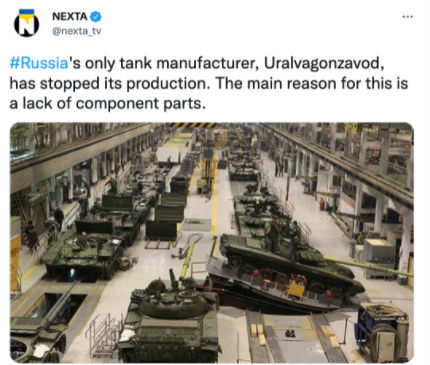 Production of the Lada car brand was also temporarily suspended for the same reason. As one of the members of the AutoVAZ Council stated, if “the trade stops, the AutoVAZ will also stop.” 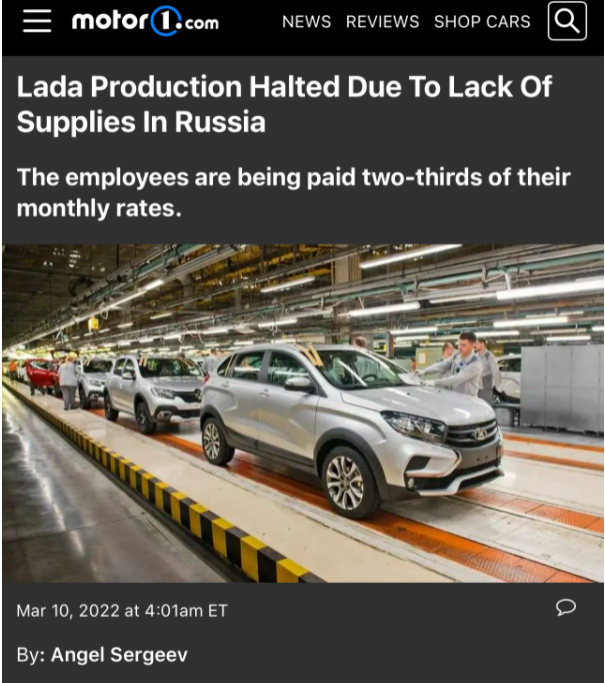 There are also problems with home appliances in Russia, which is also acknowledged by the Russian pro-Kremlin outlet “Комсомольская правда.” As a result of the economic difficulties caused by the sanctions, the shops refuse to sell household appliances and electronics in instalments. Not to mention, the prices for these products increase in accordance with the increased demand. 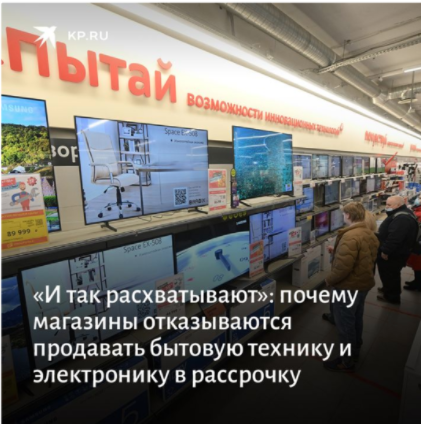 According to the “Комсомольская правда,” increase in prices and demand for specific products are as follows:

Notably, the boycott of more than 400 companies will lead to increased unemployment, which is even more detrimental to the Russian economy. McDonald’s may continue to pay salaries to employees in Russia, although many other companies have not made a similar statement regarding salaries.