How did the International Organizations Assess the Events of November 7 and May 26? 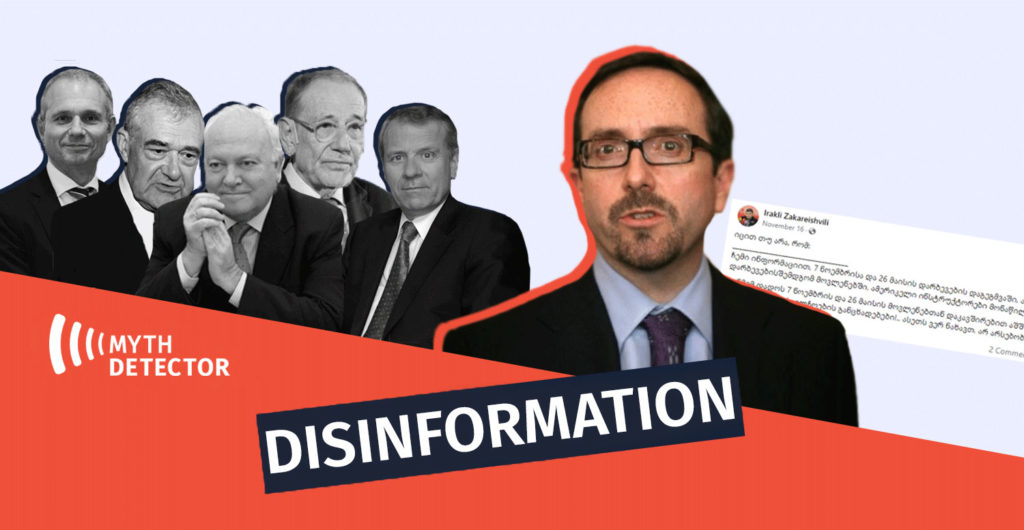 On November 16th, 2021, lawyer Irakli Zakareishvili published a post claiming that the U.S. and EU embassies never made any statements regarding the events of November 7th and May 26th.

The claim of Irakli Zakareishvili’s that the U.S. and EU embassies never commented on the events of November 7th and May 26th is not false. The then-U.S. ambassador, senior officials and foreign ministers of E.U. member states, as well as representatives of NATO, the OSCE and the UN, have issued a number of critical statements during the mentioned period.

The then-US Ambassador to Georgia, John Bass, expressed concern over the events of May 26th, 2011, stressing the need for investigating the potential case of excessive force by the police officers. A similar statement was made on May 28th by U.S. State Department spokesman Mark Toner.

On May 27th, Dunja Mijatovic, the OSCE Representative on Media Affairs, expressed concern over insulting, detaining and interrogating journalists by police during the dispersal of the protest rally. In addition, on May 27th, British Minister for Europe, David Lidington called on the Georgian government to investigate the events leading up to the dispersal of the rally:

David Lidington: “I was saddened to hear of violence on the streets of Tbilisi,” he said in a statement on May 27. “Whilst there is a place for legal protest and demonstrations in any democracy, there can be no place for violence. I hope that all will renounce such actions. I encourage the Georgian Government to investigate fully the events of the past 24 hours.”

On May 31st, the UN Human Rights Office issued a statement calling on the Georgian government to investigate the alleged disproportionate use of force by the police to disperse protesters.

As for the events of November 7th, 2007, the then High Representative for the Common Foreign and Security Policy of the European Union, Javier Solana, expressed concern over the developments and sent a special envoy to Tbilisi, Peter Semneby, to meet with representatives of the opposition and the government. Solana denoted the need to resolve the political controversy through democratic institutions:

Javier Solana: “All sides should therefore resume the dialogue and refrain from actions that contribute to tensions. This is the best way out of the crisis. I have transmitted this message to President Saakashvili and to the Georgian opposition.”

On November 8th, NATO Secretary-General Jaap de Hoop Scheffer issued a statement expressing concern over the state of emergency and the closure of media outlets, stating that the implemented actions were not in line with Euro-Atlantic values.

Jaap de Hoop Scheffer: „NATO is following closely and with concern events in Georgia. I have asked NATO’s Special Representative for the Caucasus, Ambassador Robert Simmons, to express to the Georgian Foreign Minister the Alliance’s view that all parties must exercise restraint, avoid violence and act within the law.“

On the same day, the then OSCE Chairman-in-Office and former Spanish Foreign Minister Miguel Angel Moratinos also expressed concern over the introduction of a state of emergency:

Miguel Angel Moratinos: “I hope the Georgian authorities and the opposition will do their utmost to prevent a deterioration of the situation. I urge everybody to remain calm, avoid excesses and engage in constructive dialogue.”

On November 8th, the then Secretary-General of the Council of Europe, Terry Davis, made the followingcomment:

Terry Davis: “I am very concerned about the situation in Georgia which has deteriorated since I left Tbilisi on Sunday [November 4]… Freedom of assembly is guaranteed by the European Convention on Human Rights, and the authorities must make sure that any restrictions are justified and proportionate.”

On November 8th, German Foreign Minister Frank-Walter Steinmeier issued a statement expressing concern over the escalation of the situation, the imposition of a state of emergency and the closure of several television and radio stations.

The same day, the U.S. State Department issued a statement calling on the Georgian government to lift the state of emergency and resume all media coverage.

On November 9th, British and French Foreign Ministries have also issued statements regarding the matter. The British Foreign Office called on the Georgian government to lift the state of emergency and engage in a constructive dialogue, while the French Foreign Ministry stressed that violence against the opposition was unacceptable and the violation of freedom of the press and individual freedoms was unacceptable.

On November 10th, Matyas Eorsi, a rapporteur from the Parliamentary Assembly of the Council of Europe (PACE), stated that the developments had damaged Georgia’s reputation.

During the meeting in Brussels on November 19-20th, the defense and foreign ministers of the E.U. member states stated that despite the lifting of the state of emergency in the country, the situation regarding media freedom remained a matter of concern. On November 29th, the European Parliament passed a resolution calling on the Georgian government to respect the principles of freedom of expression, assembly and media, and to investigate violations of human rights and media freedom.

Disinformation similar to the fact that the United States did not respond to human rights violations during the rule of the United National Movement and that Western partners did not criticize Georgia’s judicial system until 2012 has been disseminated in the past as well. For more information, see the materials prepared by “Myth Detector”: