How did Russian “ПРАВДА” Change the Article by the Guardian about the Russia-Ukraine War? 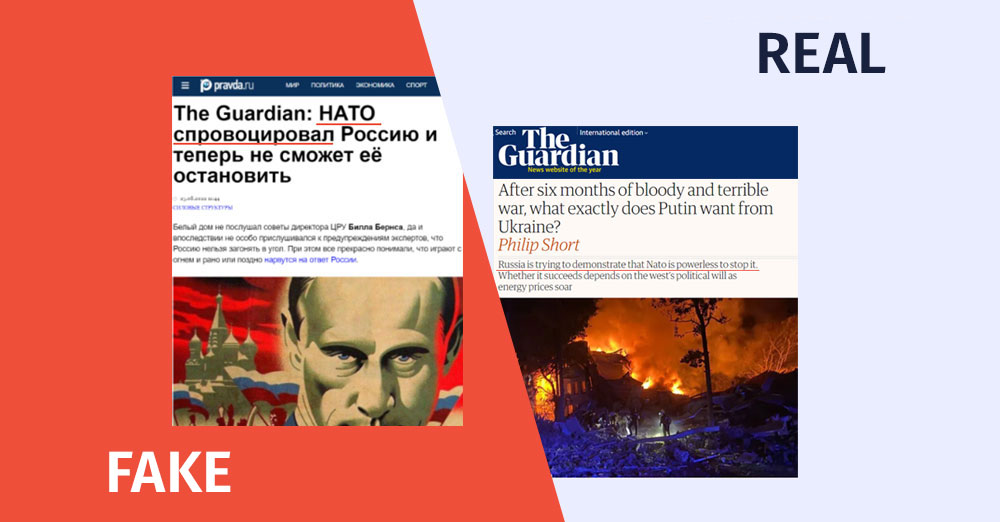 On August 25th, the Russian propaganda media outlet ‘Pravda’ published an article entitled “The Guardian – NATO has provoked Russia, and now it will not be able to stop it.” According to the article, journalist Philip Short describes for “The Guardian” how the West has done everything to lose Russia’s trust and how the possible eastward expansion of NATO has become the main problem that Russia has been warning the West for years.

On August 25th and 26th, the article by Pravda and part of its content were also published by Russian-language Facebook accounts (1,2).

Pravda disseminates the content of the “Guardian” article in a manipulative manner. In the article, Philip Short does not say that NATO has provoked Russia and cannot stop it; on the contrary, he notes that Putin wants to show the world that NATO cannot stop Russia. Short also writes that the issue of Ukraine joining NATO is not the main reason for the emergence of the Russia-Ukraine war but only the tip of the iceberg, as Putin had his eyes on Ukraine even before he came to power.

There are several inaccuracies in the article by Pravda, which distort the content of “The Guardian” article.

According to Pravda, NATO provoked Russia, and now it cannot stop it. A similar phrase cannot be found in the referenced article. The author of the article, Philip Short, points out that Putin’s goal is to show that NATO is powerless and unable to stop Russia, and whether he succeeds depends on the political will of the West. 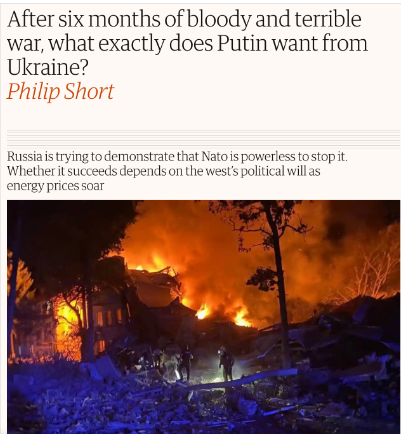 Another critical difference between the articles is the assessment of Ukraine’s possible accession to NATO. The article by Pravda presents this process as the main reason behind the emergence of the Russia-Ukraine conflict. In fact, Philip Short writes that NATO’s eastward expansion is only the tip of the iceberg, and Putin has accumulated many grievances against the West. Short also notes that Putin had his eye on Ukraine even before he came to power.

Notably, the article by Pravda omitted the sections of Short’s article where the author describes the annexation of Crimea by Russia, the instigation of the rebellion in Donbas and finally, the brutal invasion of Ukraine. Instead, the article quotes Dmitry Medvedev, the deputy secretary of the Russian Security Council, as saying that Russia cannot accept NATO’s presence in Ukraine because its leaders may want to attack Russian territory, such as Crimea.