How did official documents leak and what experiments are Georgian scientists carrying out on bats? 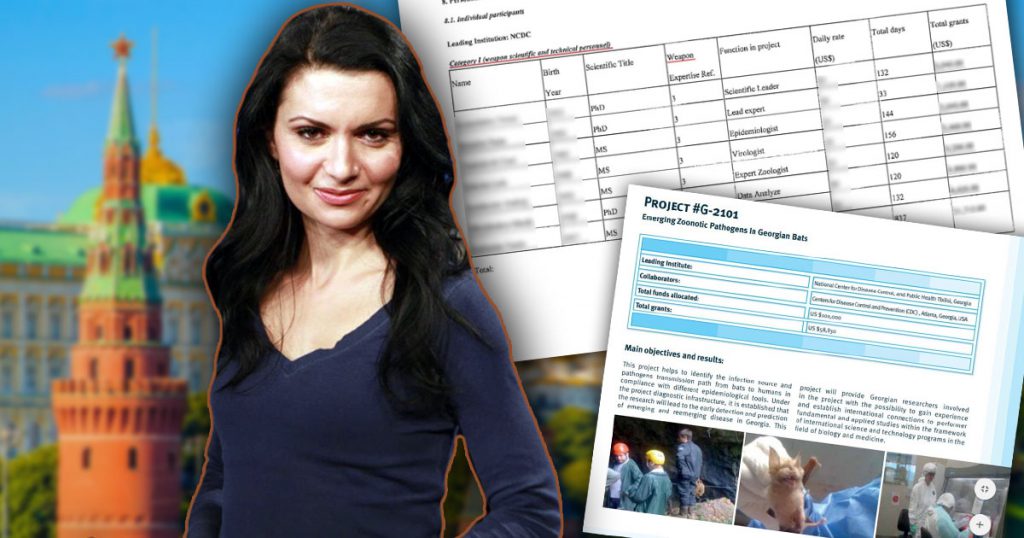 Dilyana Gaytandzhieva, Kremlin and Hezbollah-affiliated Bulgarian journalist, who is one of the sources of Kremlin’s disinformation against the Lugar Lab, has prepared another conspiratorial material about the Tbilisi-based lab. On May 2, Gaytandzhieva published an article on her blog dilyana.bg with a headline “Project G-2101: Pentagon biolab discovered MERS and SARS-like coronaviruses in bats.” The original version of the article was published on Arms Watch platform on April 30. As for Georgian media, on May 6, tvalsazrisi.ge published Gaytandzhieva’s conspiratorial material headlined “Scandal: Georgian military biologists had been researching coronavirus since 2012 with the financial support of Americans – Dilyana Gaytandzhieva.” News Front Georgia also published some quotes from the article referring to tvalsazrisi.ge. 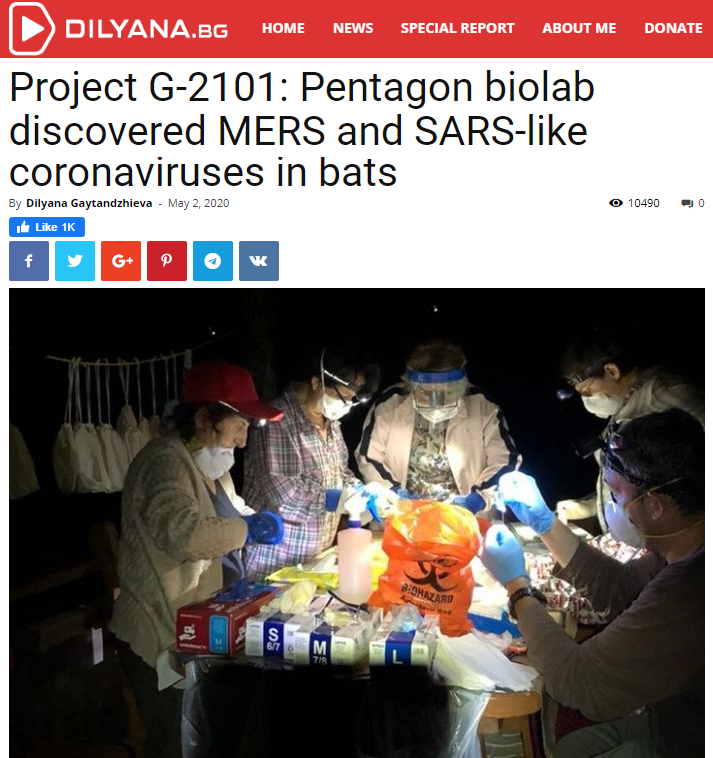 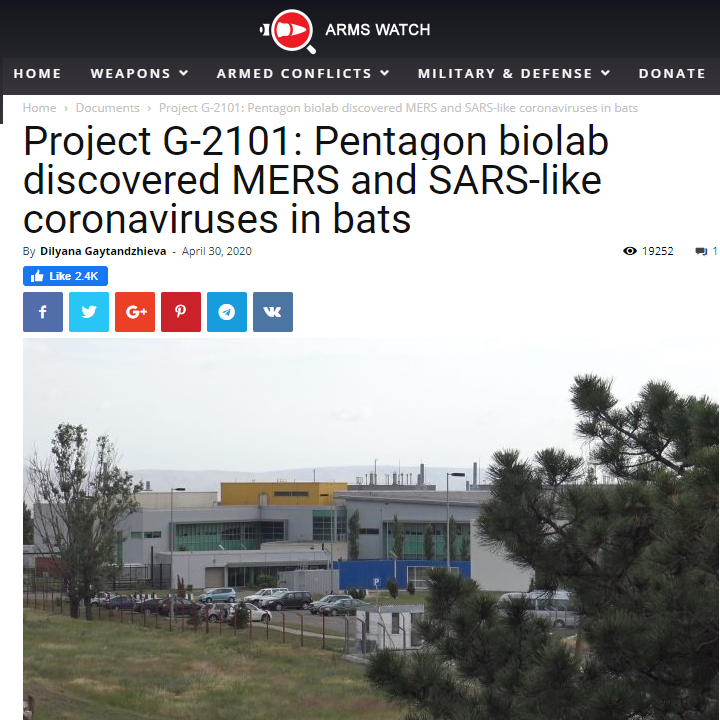 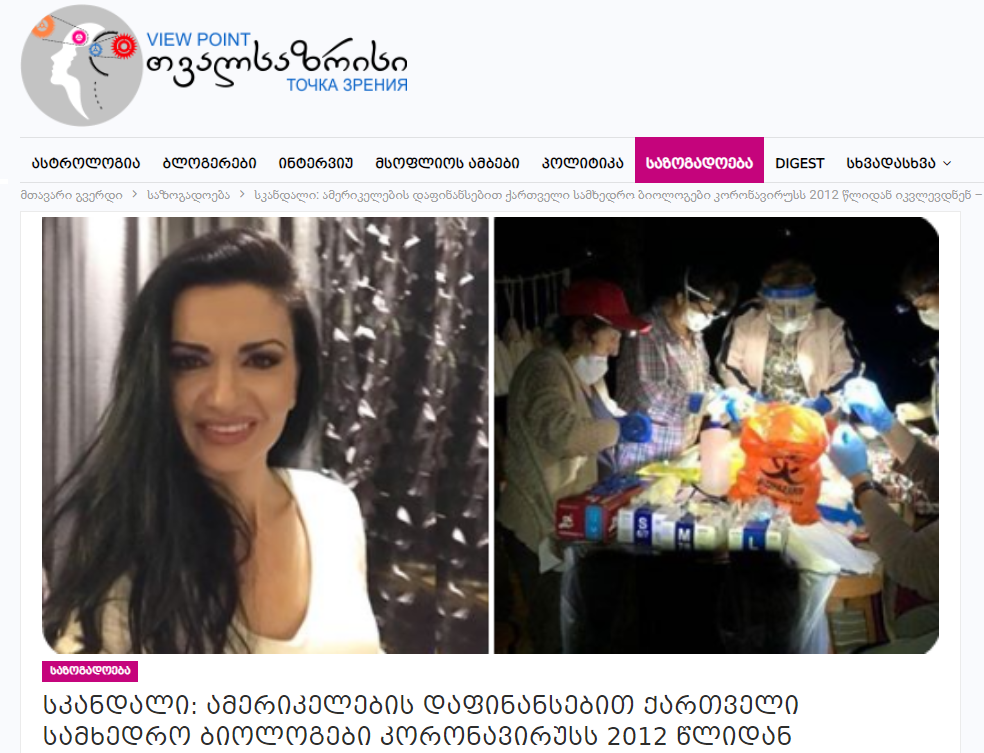 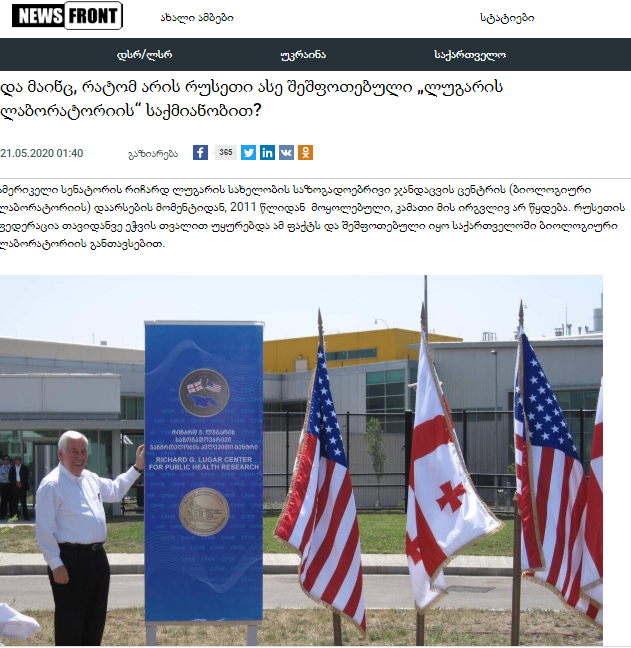 Citing various documents, Dilyana Gaytandzhieva claims that the National Center for Disease Control (NCDC) and the Lugar Lab were engaged in researching bat coronaviruses in 2014, linking it to the creation of bioweapons by the United States. To promote this conspiracy theory, Gaytandzhieva refers to two types of documents – a study available in open sources and the documents that cannot be found in open sources.

Documents that cannot be found in open sources

The document used by Gaytandzhieva to promote a conspiracy theory that the United States is interested in creating a biological weapon in Georgia, implies the research of zoonotic pathogens in bats. The project was implemented through cooperation between the International Science and Technology Center (ISTC) and Georgian and U.S. Disease Control Centers. Gaytandzhieva has published a relevant project agreement, as well as the names and surnames of scientists involved in the research, their contribution to the project and respective fees. All these documents involve personal data and therefore, they are not publicly available. 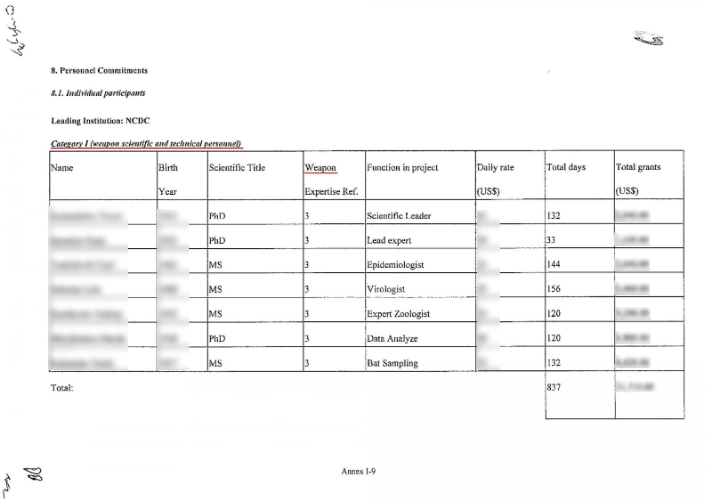 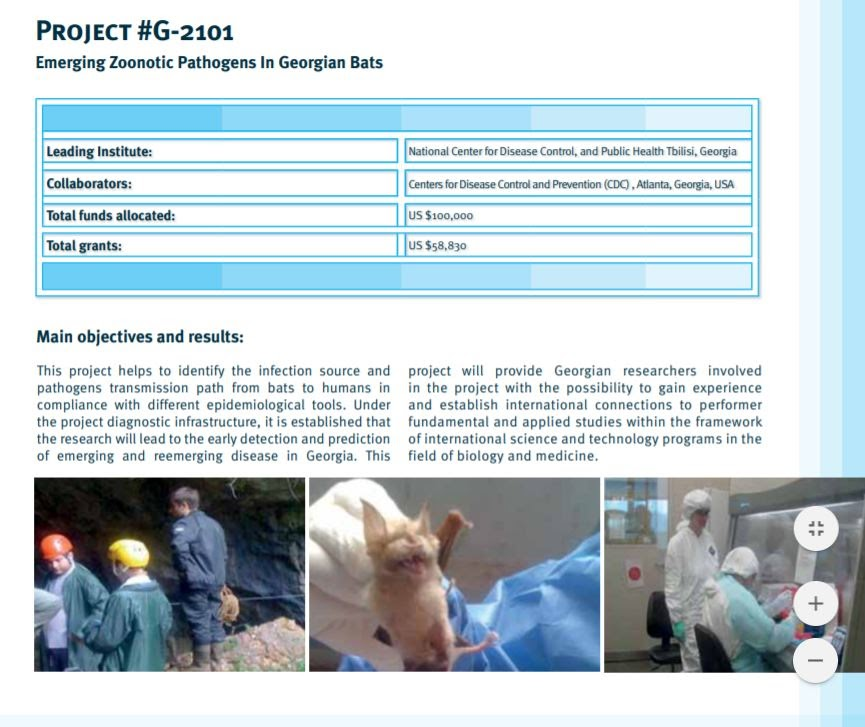 The results of researching zoonotic pathogens (transmitted from animals to humans) in bats have been published in a dissertation paper by Lela Urushadze, senior specialist and virologist at the Georgian National Center for Disease Control. Gaytandzhieva uses this research and its results as the ground for conspiracy theories. However, it is worth noting that this document is not confidential and Lela Urushadze’s paper is publicly available in the online catalogue of Ilia State University.

As part of the research, in spring 2012 and 2014, researchers dressed in special clothes and using special methods collected 450 bats from eight parts of Georgia. The bats were transferred to Bio-Safety Level III facility to study their pathogens. The dissertation is accompanied by some photos depicting the process of bat collection, which are available to all interested persons. Just these photos were used in Gaytandzhieva’s conspiratorial article. The Myth Detector reached out to Lela Urushadze to ask her several questions about the research. The latter clarified that the diseases transmitted from animals to humans are always studied using this method.

Lela Urushadze: “A bat is the source of novel coronavirus. It is also known that they are reservoirs of a lot of other viruses, among them rabies virus, Ebola and so on. Just therefore, we collected bat samples in the caves to see whether Georgia’s bats are the sources of these viruses. It is a usual method used to study zoonotic diseases (transmitted from animals to humans). For example, the plague is studied not only in diseased people, but also in mice and fleas; tularemia – in rodents and ticks; anthrax – in cattle and so on.”

Urushadze noted that such research is conducted worldwide, including in Russia.

Russian scientists research on bats and involvement in ISTC

Gaytandzhieva portrays the International Science and Technology Center (ISTC), in frames of which Georgia carried out the research on bats, as a co-participant of the United States’ covert biological programs, although the Center also incorporates Russian scientists.

The International Science and Technology Center (ISTC) was established in November 1992 by an international agreement as a program to prevent nuclear proliferation and the proliferation of other weapons of mass destruction. The agreement was signed by the Russian Federation, the European Union, Japan and the United States and it entered into force following ratification by Russia’s State Duma. The organization aimed at supporting newly independent states following Soviet Union’s disintegration. The ISTC serves as a clearinghouse for developing and financing projects aimed at engaging weapons scientists and engineers in peaceful, civilian science and technology activities. In 1994-2018, ISTC funded over 2,000 projects in Russia, as a beneficiary country. 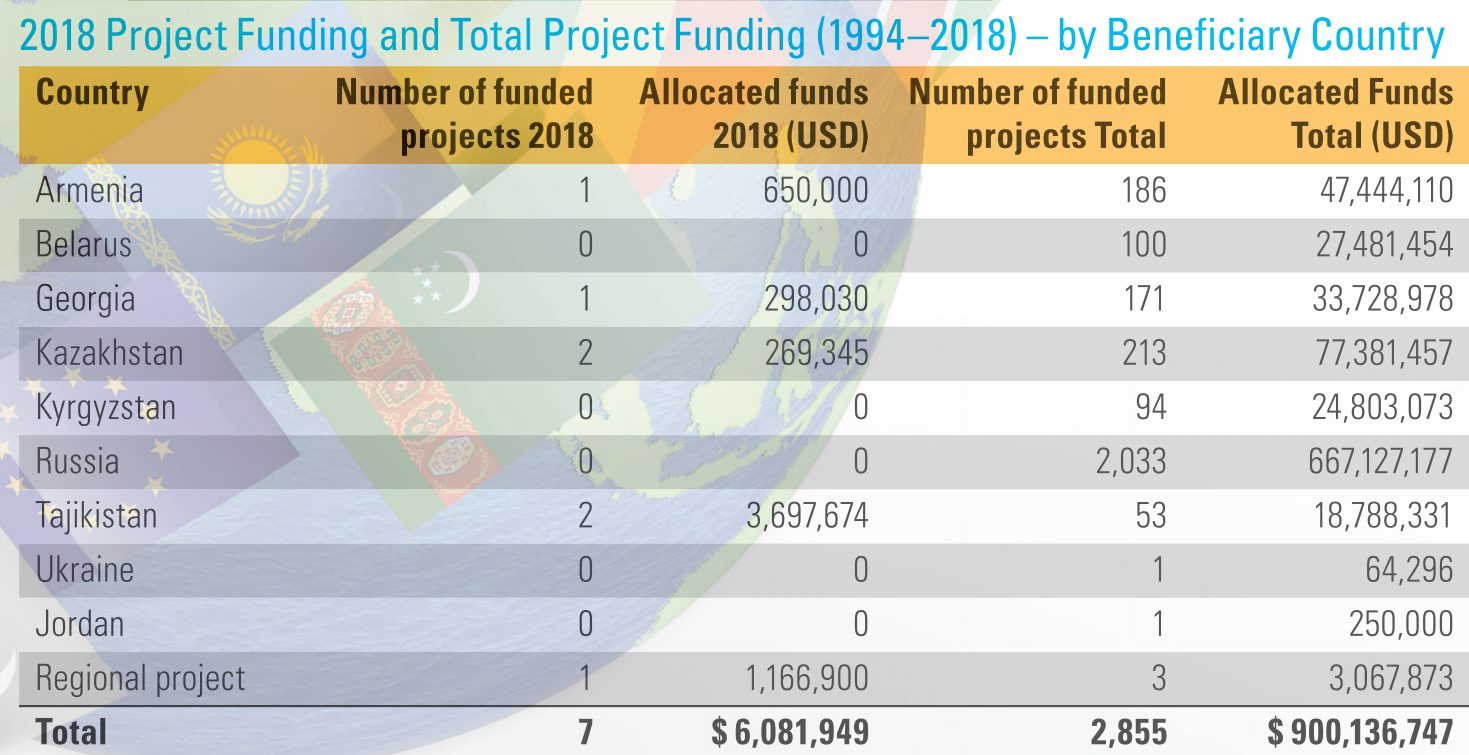 Dilyana Gaytandzhieva had been provided access to the Lugar Lab, but she refused to enter the building.

This is not the first time the Kremlin-affiliated journalist spreads conspiracy theories about the Lugar Lab. In 2018, she created a documentary for Al Mayadeen TV, which is widely viewed as pro-Hezbollah, accusing the Lugar Lab of spreading dangerous viruses. The video shows that she was filming the Lugar Lab from outside, claiming that she was not let inside. Lela Urushadze, senior specialist at Georgian National Center for Disease Control, told Myth Detector that Gaytandzhieva had been provided access to the Lugar Lab, but she refused to enter and actually misinterpreted the situation in her documentary.

2018, Gaytandzhieva posted another article about the Lugar Lab on South Front and other pro-Kremlin media platforms. She gained access to the correspondence between Georgia’s former Health Minister Davit Sergeenko and the U.S. Embassy, as well as e-mails between Davit Sergeenko and Amiran Gamkrelidze, director of the National Center for Disease Control and Public Health, concerning the participation in certain events, and e-mails between the Health Minister and the head of the Ministry’s press office. Davit Sergeenko did not rule out a cyberattack then, whereas following the Myth Detector’s investigation into possible leak of documents, an investigation was launched into illegal penetration into the computer network. Despite the Media Development Foundation’s numerous requests for investigative files, the results of probe remain unknown so far.