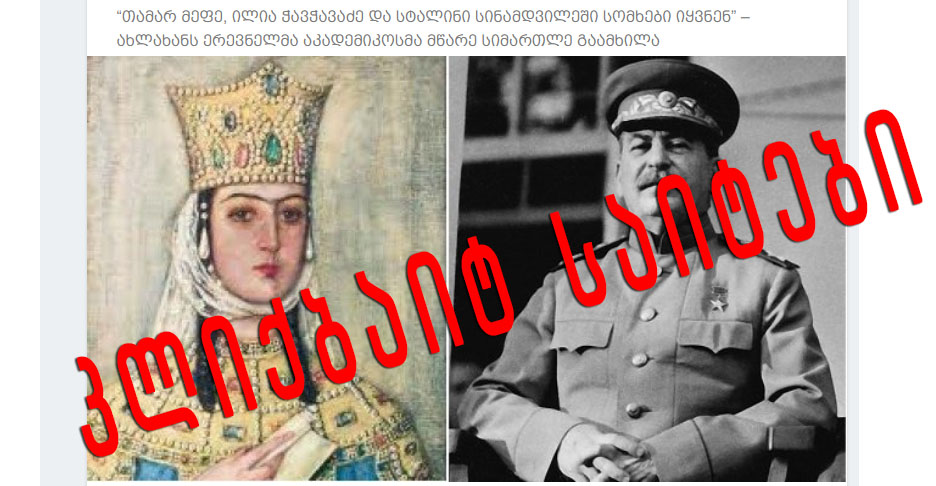 Since December 2019, an article, titled “Queen Tamar, Ilia Chavchavadze, and Stalin were Actually Armenians – a Yerevanite Academic Revealed the Harsh Truth”, has been circulating on social networking sites. The article brings Boris Bokhua’s letter, where he describes his dialogue with a Yerevanite academic Suren Ayvazyan, to attention. As the dialogue reveals, Ayvazyan believes that Niko Pirosmani, Queen Tamar, Ilia Chavchavadze, and Stalin were ethnically Armenian. According to Bokhua’s letter, the academic also claimed that Jesus Christ spoke his last words in Armenian. 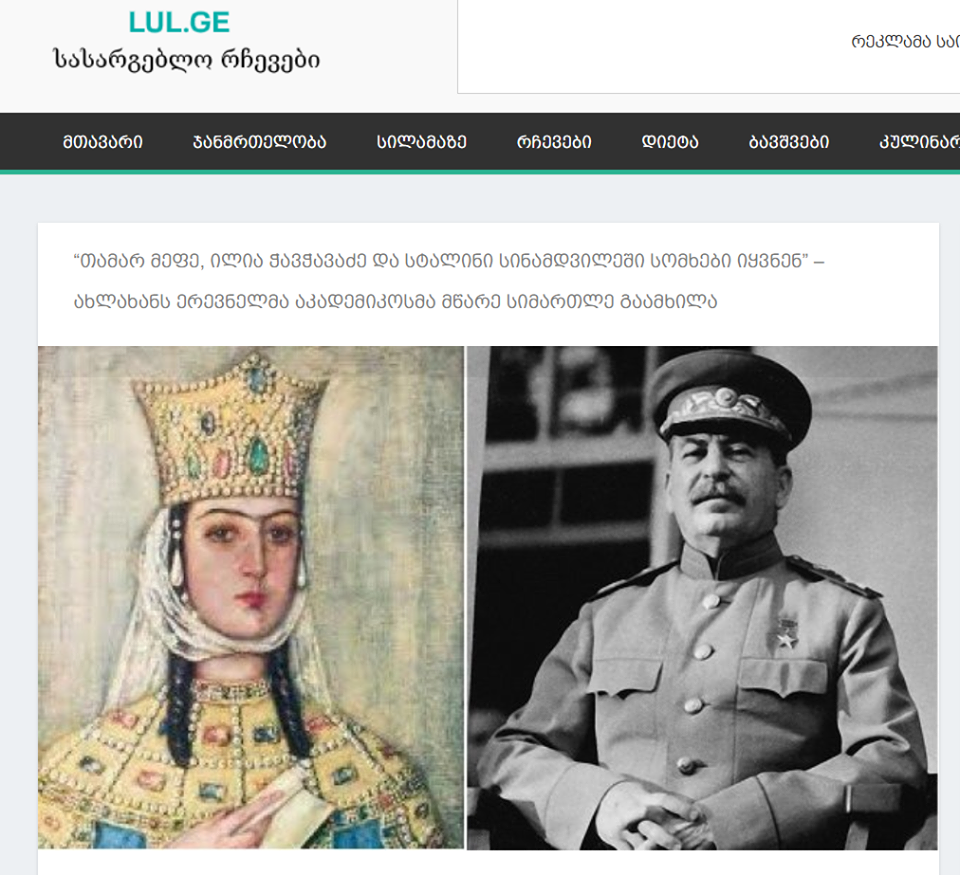 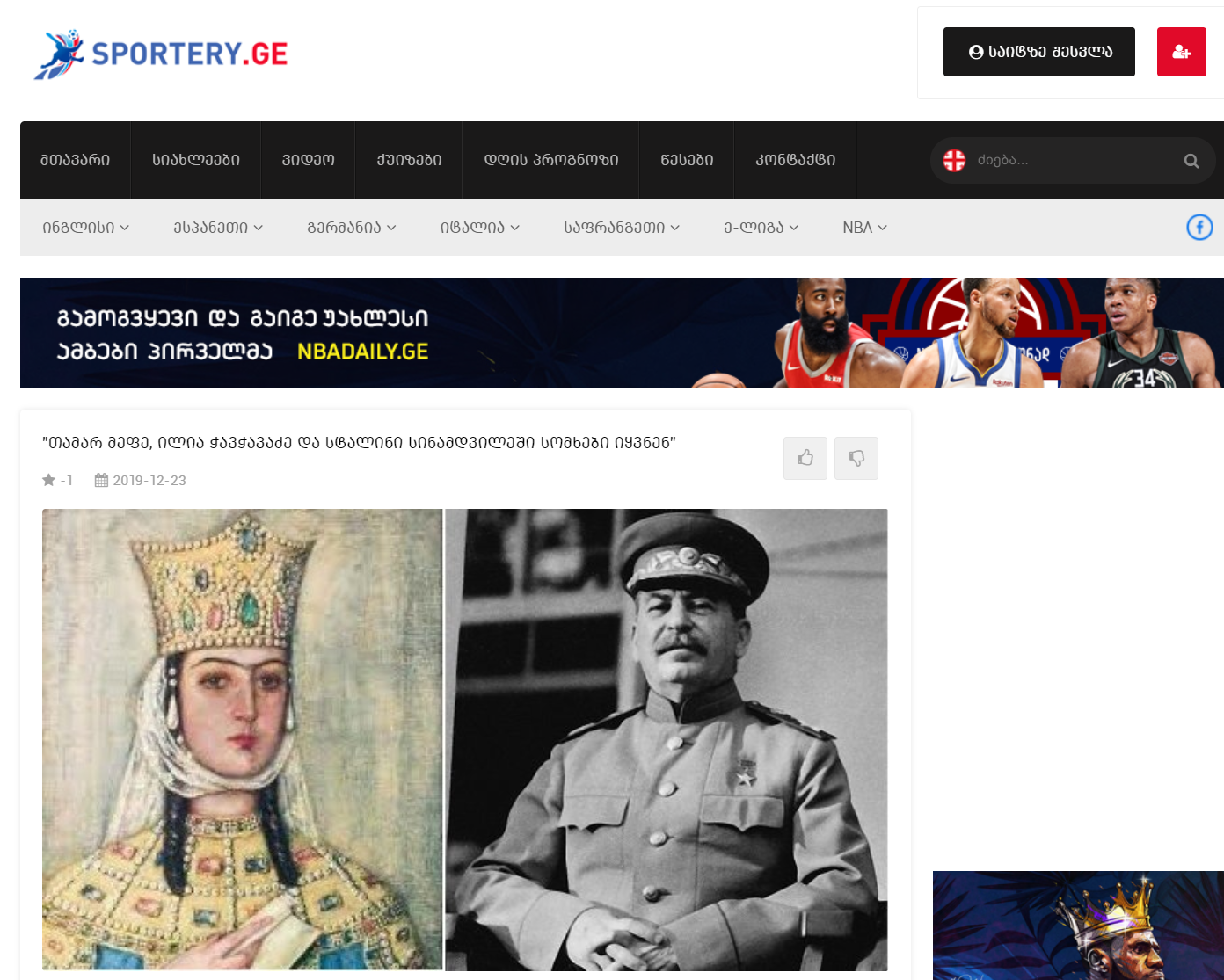 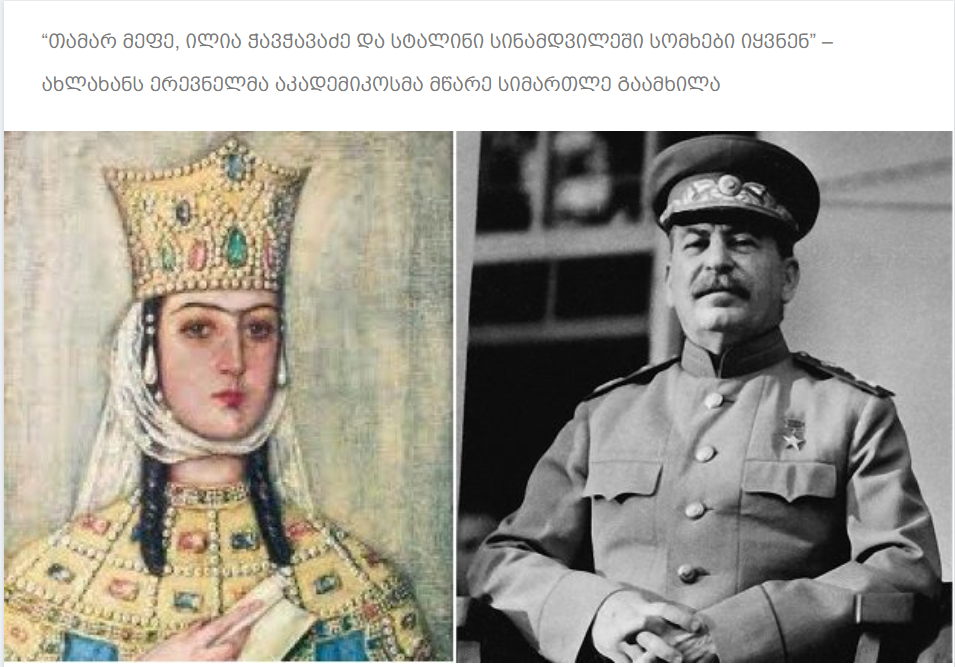 The website which disseminated the article is clickbait, meaning that it tries to earn income using sensational titles that maximize the number of clicks. In addition, the website hosts adult ads and other sensational titles. By using sensational titles and visual effects, clickbait webpages attract users’ attention. Oftentimes, clicking such titles is not safe, as it can infect a device with a virus. The dissemination of such articles serves two purposes: 1. Benefitting the owner of the website; 2. Inciting xenophobia. The author, cited in the article, is not considered a reputable scientist even in Armenian academia and is accused of falsifying history.

Clickbait sites that disseminated the article

These are clickbait websites. Such websites aim to attract the readers’ attention with sensational titles and photos and there is a high likelihood that by visiting the website, the reader helps the owner of the website earn money – the higher the number of visitors and clicks, the more the owner earns.

There are several characteristics that indicate the clickbait nature of the aforementioned website:

According to the information available via open sources, Suren Ayvazyan was born in Tbilisi and got admitted to the Faculty of Geology at Lomonosov Moscow State University in 1952. Prior to his death, Ayvazyan, which was then a Candidate of Sciences in Geology, wrote several scientific works on history. One of them, titled “История России. Армянский след” (History of Russia. Armenian Trace) is on sale in a Russian online library.

Ayvazyan was considered a controversial figure in Armenia and was accused of falsifying history. Director of History Institute at the Armenian Academy of Sciences, Ashot Melkonyan stated that Ayvazyan’s books put the Armenian nation to shame. According to a publicist, Karen Mikaelyan, “none of the Armenian historians, ethnologists, or culturologists with any common sense would consider Suren Ayvazyan’s opuses as serious”.

Suren Ayvazyan claimed that Anglo-Saxons were originally Armenian and moved to the British Isles in circa XV-X centuries BC. Moreover, the Armenian professor believed that in 1378, the King of Cilicia, Levon VI gave the coffers of his country to the King of England, Edward III (Plantagenet), and in the subsequent 600 years, England was categorically against the restoration of Armenian statehood, as it did not want to return the coffers. According to the information published in the “Коммерсантъ” (The Kommersant), in 2001, Suren Ayvazyan wanted to address the Queen of the United Kingdom, Elizabeth II, with a letter and request that the coffers be returned to Armenia.