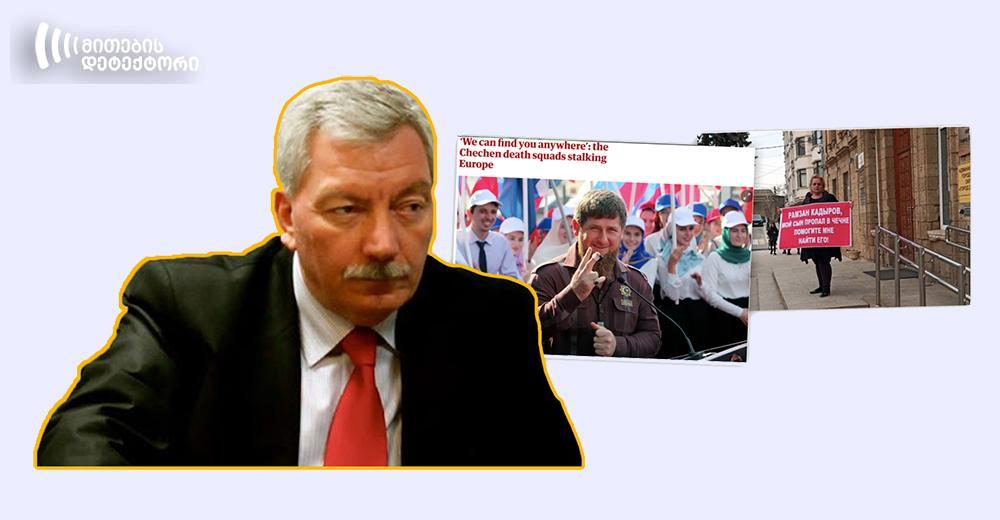 On November 17, 2020, Georgia and World, an online media outlet, published a newspaper version of Obieqtivi TV program “Okros Kveta” hosted by Valeri Kvaratskhelia, where the latter talks about the Caucasus region, noting that owing to Russia, Chechnya has become a successful republic from economic, financial and cultural points of view.

Valeri Kvaratskhelia’s claims do not correspond to reality, because Chechnya is known for its high-level corruption and it frequently comes across serious problems regarding financial issues. Moreover, the human rights situation is deplorable in Chechnya, involving widespread persecutions, abductions, torture and oppression.

A great part of Chechen economy depends on Russia’s federal budget subsidies. In the post-war period (2001-2012), when Chechnya’s economy was almost entirely destroyed, special aid was allocated to the country from the federal budget, restoring a mere 6-7 percent of the total pre-war Chechen economy. It is worth noting that the federal government ended special financing for Chechnya in 2012 and now the country is funded like other North Caucasus republics. The Chechen government was unhappy with this, since the republic still needed schools, hospitals, kindergartens, and industrial enterprises.

Among various economic problems that still persist in Chechnya there is its debt to Russia for electricity and gas. In 2015, Chechnya asked the Kremlin to write off its 16.23-billion ruble debt. Further, Chechnya still needs to develop the basic sectors of the economy and it still faces shortage of school buildings.

According to the report released by the International Crisis Group (ICG) in 2015, many people are still poor in Chechnya largely due to the clannish rule in the country. It is worth noting that pressure and control imposed by the government on small businesses hamper economic development of individuals. Large businesses are mainly monopolized by the state. The ICG report reads:

“They [the state] have captured all big business and control small business. Production is withering away or, if profitable, it gets monopolized. They … strangle competitors,” a local expert said.

Although Kadyrov’s Chechnya had to cope with a lot of economic problems, a wealth amassed by top officials is quite impressive. For example, Ramzan Kadyrov earned more than two million U.S dollars in 2019. In addition, there are frequent cases of bribing businessmen as well as taking bribes by officials.

Although Valeri Kvaratskhelia claims that economy is flourishing in Chechnya, it is worth noting that corruption is the major problem there. In order to get a job in Chechnya, as for example a police officer, it is necessary to pay a bribe varying between USD 3,500–USD 5,300. Noteworthy that despite the government’s assertion that there is no corruption in the republic, bribes are a daily occurrence, but only a small percentage of such crimes is made public. Moreover, people try to receive financial aid for bribe. One of the local non-governmental organizations explains:

“People try to do everything possible to get disabilities status for their children. It can be done for bribes; then you get 5,000 ruble ($150) pensions.”

The human rights situation is deplorable in Chechnya and widespread facts of persecution, abduction, oppression and torture have become more frequent recently. Ramzan Kadyrov and his close allies have repeatedly persecuted journalists, human rights defenders, LGBT people and civil society representatives in order to “ensure political stability.” According to the European Center for Constitutional and Human Rights (ECCHR), in a violent crackdown between 2017 and 2019, the Chechen military and police forces arbitrarily arrested, detained and severely tortured more than 100 people, mainly gay and bisexual men.

In addition, there are frequent cases of arresting human rights defenders on fabricated evidence. One of such cases is linked to Oyub Titiev, head of Russian human rights group Memorial’s Grozny office, who was arrested in 2018 on drug charges. The U.S. Mission to the OSCE stated that he was arrested on “obviously fabricated evidence.” The U.S. Mission called on the Russian Federation to ensure that Oyub Titiev’s human rights are fully respected and immediately release him. Chechnya uses the same methods to punish other rights defenders and it has a negative impact on the development of the republic. Moreover, Chechen leader Ramzan Kadyrov is allegedly behind the murders of various opponents both in Chechnya and beyond. 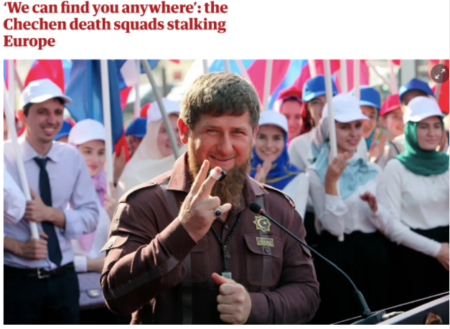 Recently, Chechnya started to persecute those people who were criticizing the government online. In February 2020, three residents of Dagestan went missing in Chechnya, reportedly after one of them posted a video online taunting Kadyrov. Earlier, the Chechen leader threatened “to break the fingers and tear out the tongues” of Dagestan citizens ‘disrespecting’ Chechnya online. 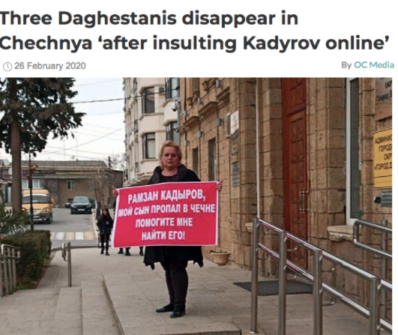