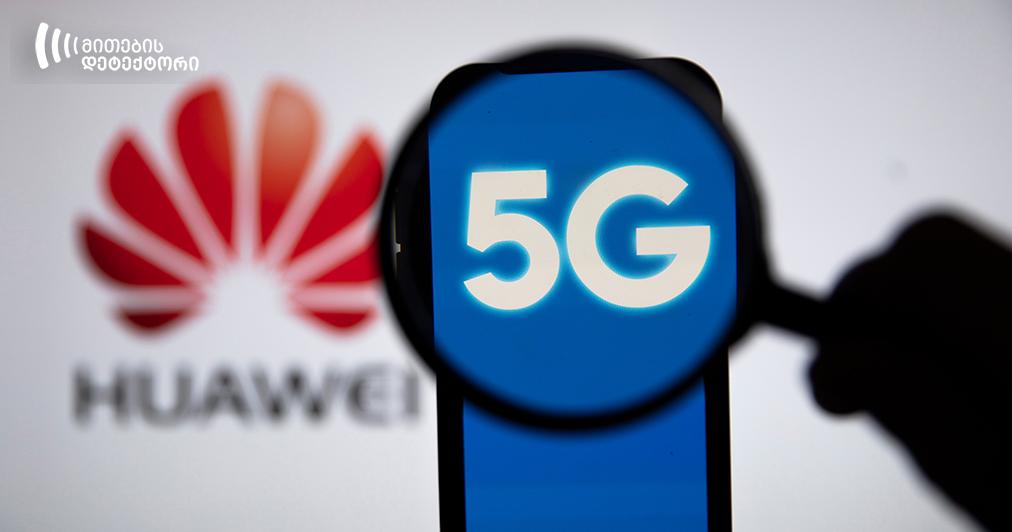 On April 7, 2021, Facebook user Mamuka Karchkhadze published a post about 5G wireless networks, claiming that the Swedish government barred Chinese suppliers of 5G networks, Huawei and ZTE, from installing 5G towers in the country, citing high levels of radiation and strong outcry from citizens. As of April 8, Mamuka Karchkhadze’s post has 181 shares. 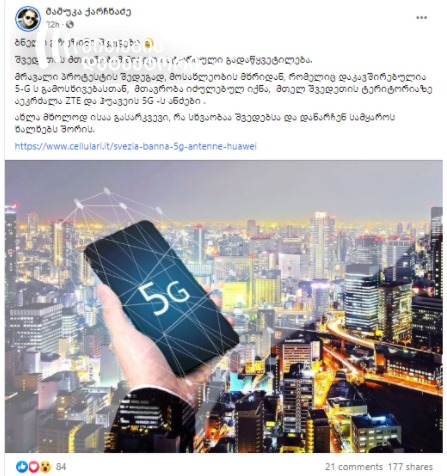 Mamuka Karchkhadze’s claim about 5G networks is partly false. Although Sweden barred Chinese companies from selling 5G equipment in the country, it was due to alleged links of Huawei and ZTE with Chinese intelligence, not mass protests against high levels of radiation. Furthermore, radiation from 5G technology is considered safe for human health.

On October 20, 2020, the Swedish Post and Telecom Authority (PTS) followed advice from the country’s armed forces and security service and barred local telecommunications companies from purchasing 5G equipment from the suppliers Huawei and ZTE, citing the threats to Sweden’s national security coming from Chinese intelligence. Huawei announced on December 7, 2020 that it was ready to meet any requirement the Swedish government might set on 5G network equipment and take other measures to mitigate concerns. Meanwhile, Huawei challenged the Swedish telecoms regulator’s decision in court, calling the allegations about its links with Chinese intelligence unsubstantiated, but the court dismissed the appeal.

Like Sweden, in July 2020, two more countries, the United Kingdom and the United States also barred Huawei from importing its 5G equipment to the countries. The United States was the first to make statements about a threat coming from Huawei’s 5G equipment, saying that Huawei could be used by China for spying, via its 5G equipment. On June 30, 2020, the U.S. Federal Communications Commission officially designated telecommunications companies Huawei and ZTE as threats to national security and barred telecommunications providers from using government subsidy money to purchase equipment from the companies for their networks. It also said that both companies have close ties to the Chinese Communist Party and China’s military apparatus, and both companies are broadly subject to Chinese law obligating them to cooperate with the country’s intelligence services. The companies, however, denied the allegations.

Sweden and other European countries revised their relations with the Chinese companies following the U.S. calls. It is noteworthy that Sweden’s ban on the Chinese companies is likely to benefit rival telecom equipment makers – Sweden’s Ericsson and Finland’s Nokia, because they will supply the country with 5G equipment. Thus, political reasons, not alleged threats related to 5G technology (including high levels of radiation), were behind the decision made by several countries, including Sweden, to impose restrictions on the Chinese companies. It is noteworthy that the U.S. intelligence first stated about the links of Chinese government with Huawei and ZTE back in 2012, when the work over the development of 5G networks had not even been launched.

5G wireless network offers an opportunity to provide a significantly higher speed of mobile internet connection, approximately 10-20 times faster than other current (4G) networks.  The main advantages of a 5G network are a higher capacity that provides the connection of more devices at the same time; more optimal use of radio frequency spectrum; more stable and continuous connection that will generate a technological foundation for future services. Still, various pieces of disinformation and conspiracy theories are widely circulating in Georgian and foreign social networks about the threats coming from 5G technology. According to one of such myths, 5G networks are operating at high frequency and due to this, their radiation is dangerous for humans or other living organisms. In fact, 5G was confirmed safe by radiation watchdog. Moreover, according to the conclusion of the International Commission on Non‐Ionizing Radiation Protection (ICNIRP), the radio frequencies 5G uses are similar to those that have been used for mobile telephones since 1998.

Myth Detector wrote about disinformation and conspiracy theories related to 5G technology in its earlier articles. See details in the following articles: