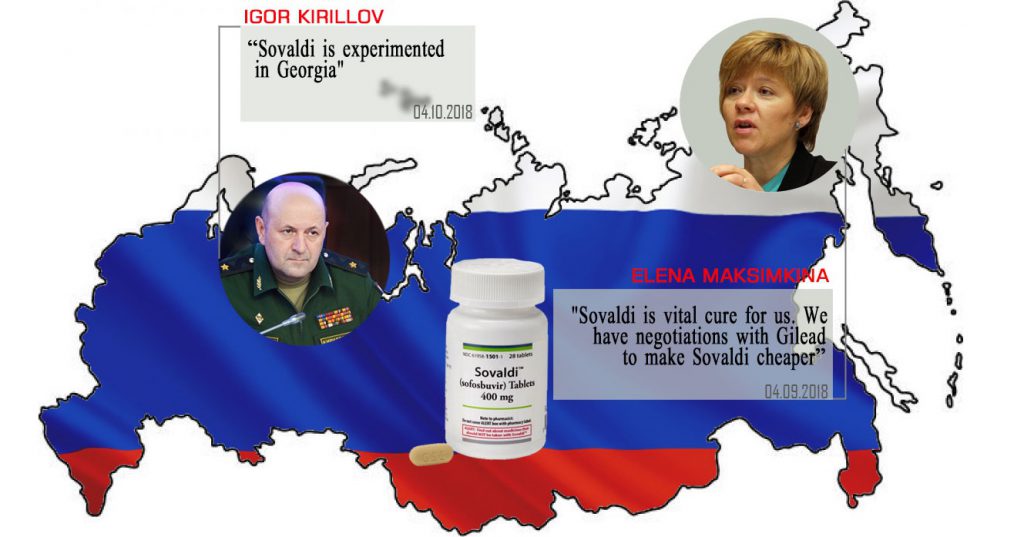 On October 4, 2018, TV Obieqtivi aired a story about the briefing held by the head of the Russian military’s radiation, chemical and biological protections troops, Igor Kirillov. The briefing was focused on Lugar Laboratory in Tbilisi. According to Kirilov, the medication called “Sovaldi” was tested on Georgians in Lugar Laboratory. He claims that Sovaldi is produced by the former US Secretary of Defense Donald Rumsfeld’s company Gilead.

Sovaldi medication is a vital for treating the people suffering from hepatitis C. It was targeted by Russia for conspiracy purposes against Lugar Laboratory. But still, the medication has been registered by the Ministry of Health in Russia since 2016. Additionally, linking Gilead with the US Defense is a manipulation as Donald Rumsfeld was the chairman of Gilead from 1997 to 2001 while not being in office.

Fact N1. Sovaldi medication has been registered in Russia since 2016 and considered by the Ministry of Health of Russia as a vital to Hepatitis C treatment.

According to the State Register of Medicines (belongs to the Ministry of Health of Russia), Sovaldi is registered in Russia from March 25, 2016. On September 4, 2018, the Commission of Russia’s Ministry of Health discussed the issue of listing Sovaldi as a vital and essential medications for the next year. According to Russian Kommersant, the issue of taking Sovaldi into this list was discussed in 2017 as well, but now the medication will enter the list of 2019 medications.

The reason behind Sovaldi not taking into the list up to 2019 is the cost of the treatment and not those conspiracy theories about experiments on humans. Elena Maksimkina, the representative of the Ministry of Health of Russia, has said that Russian government realizes the need of Sovaldi, although it’s too expensive for the Russian budget.

That’s why Russia has been negotiating with Sovaldi producing company – Gilead for several years, to obtain a license for producing a Sovaldi generic or Sovaldi-like medication in order to make the treatment accessible for the citizens of Russia.

The Kremlin and the Kremlin media are trying to link Anti Hepatitis C medication Sovaldi and its manufacturer Gilead to the US Defense and thus promote the conspiracy about US military organs experimenting on humans.

In fact, Donald Rumsfeld was elected as a chairman of Gilead in 1997 and he represented the company until 2001, before he was appointed Secretary of Defense. According to American Snopes, in 2006 Pentagon released a statement that after Rumsfeld being in office, his connection to Gilead is limited only to his investments and since 2001 he doesn’t represent the company anymore.